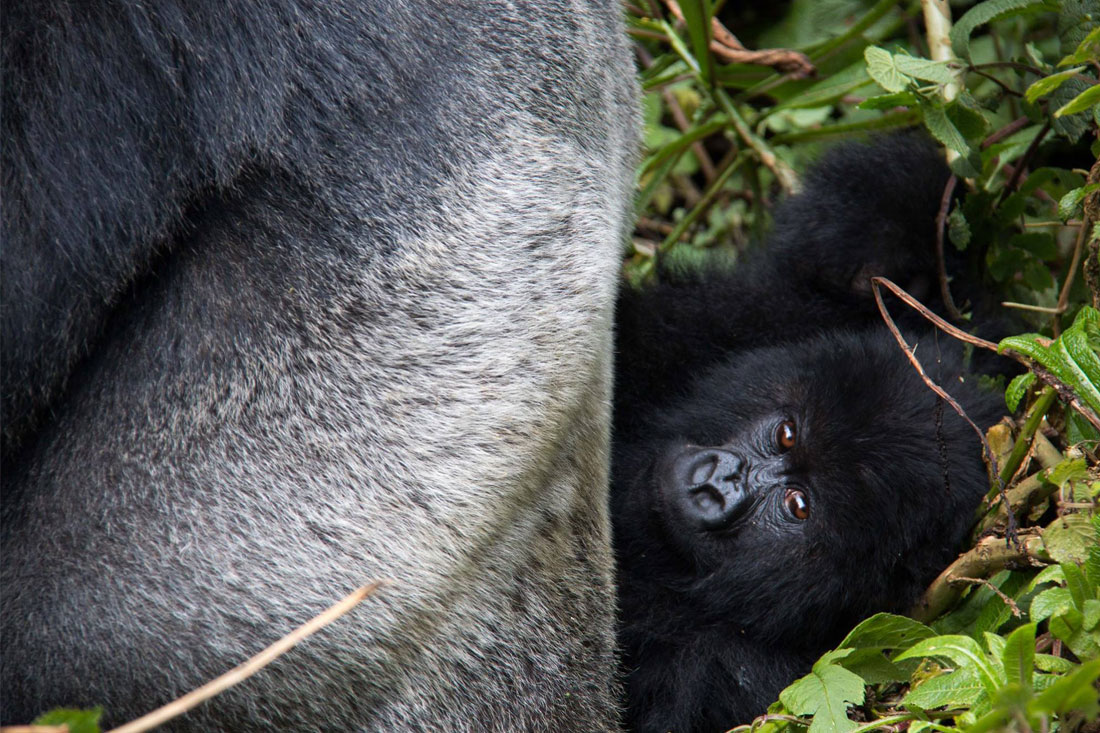 There’s only one brief moment when I feel afraid. I am in Volcanoes National Park in the North West corner of Rwanda, and I’m crouching one metre away from an angry female gorilla.

Her initially calm demeanour changes when she starts to grunt and bang her fists on the ground. Heart beating, I look down and avoid eye contact. This tension slowly plays itself out over 30 seconds, at which point she turns to stomp past me, abruptly brushing her shoulder against mine as she exits the scene. And then it’s over. A mountain gorilla just touched me. 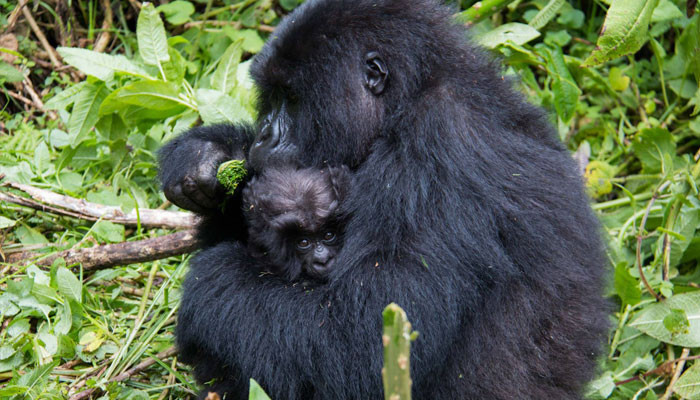 A mountain gorilla and her newborn. Image c/o Amanda Linardon

Volcanoes National Park is home to a couple of hundred mountain gorillas. There are only around 900 remaining in the world and about 200 of them reside here, deep within the Virunga Mountains, a range that runs through the intersection of Rwanda, Uganda and the Democratic Republic of the Congo. The only other place where mountain gorillas exist is in Uganda’s Bwindi Impenetrable National Park. The International Union for Conservation of Nature has listed them as critically endangered.

Why are there so few mountain gorillas remaining? War and political instability in the three countries that share the Virunga Mountains have had a negative impact on the gorillas for some time. They also face increasing loss of habitat due to local communities encroaching into parkland to expand their farmland and villages. This is evident during the first half of our walk to Volcanoes National Park, which follows a steep path that passes through crops and local homes with children running out screaming an emphatic ‘hello!’ It takes a full hour to reach a stone wall that separates the park from the village – a wall that is fundamental in preventing the local community from extending further into the park.

Up until this point, our small group of eight have had it pretty easy, walking on a well-structured paths and high-fiving the kids who come out to greet us. After a final briefing on how to behave around the gorillas, we cross the stone wall and head into thick, humid jungle. Things are about to get real.

This is a good time to get to know our group’s ranger. Each group of eight people is assigned an official park ranger prior to heading into the park. He’s the boss. Whatever he says, you do, no exceptions. But our ranger isn’t a drag; he keeps things light and fun until we hit crunch time. As we trudge along the muddy path I learn that he’s done this trek hundreds of times, and he knows the jungle well. He tells me stories of the porters who have been carrying our bags for us. Most of them are ex-poachers, another severe threat to the existence of the mountain gorillas. They are killed or captured and sold for significant amounts of money. But these porters have “seen the light” and now earn their income through tourism. When I was asked to hand over my small day pack to a porter who would help me with the trek I was initially a little insulted, but now I understand how vitally important it is to have these men walk by my side.

I learn the same story applies to the gorilla trackers. These men have an admirable job – rising early every morning to track each family of gorillas in the mountains and sticking around all day long to protect them from potential poachers. It is almost unthinkable that these men used to hunt the gorillas; now those same animals have become an extension of who they are. When our group meets them after another hour of trekking, we are taken off-path straight into the thick jungle, where they bash through the forest with a machete, carving out a rough track for us to follow. The gorilla family are close. Our trackers make deep grunting noises to communicate to the gorillas that we are on our way. 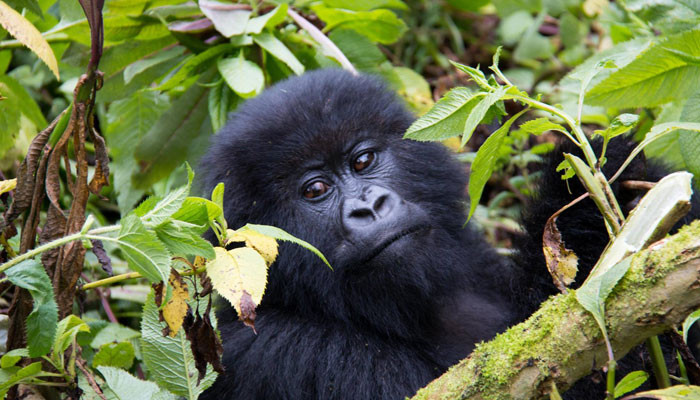 A mountain gorilla in the forest. Image c/o Amanda Linardon

It’s at this point that anticipation runs high. The entire group is silent, awaiting our first (and probably last) encounter with the mountain gorillas of Rwanda. We enter a small clearing and there they are, looking completely nonchalant. Our 60 minutes has started.

Apparently our gorilla group has just finished breakfast, so with full tummies they are happily resting. Two young gorillas are playing, climbing up vines and hurling themselves at each other, rolling around on the forest floor. A couple of females are grooming each other. The silverback, or dominant alpha male (aka the boss) is lying around and scratching his belly. He only sits up to inspect us much later into the hour and when he does it’s hard to comprehend the enormity of his bulk: his silver back is easily size of a small car. A mum is clutching a two-month-old baby, so young that it doesn’t even have a name yet. Each time a gorilla is born here it is cause to celebrate, so the local community organise a naming ceremony in the village. This tiny gorilla will be officially welcomed very soon.

The naming ceremonies show how proud this country is of their native mountain gorillas and they have done much in the name of conservation. Despite their critically endangered status, it used to be a lot worse. In 1981, there were only 254 gorillas in the Virunga area, in 2010 that number had almost doubled to 480. Conservation programs have played a large part in driving this change and tourism has directly contributed – although permits into the park are steep they go towards ongoing conservation efforts, and your tips to the rangers, trackers and porters provide them with an alternative income to poaching. 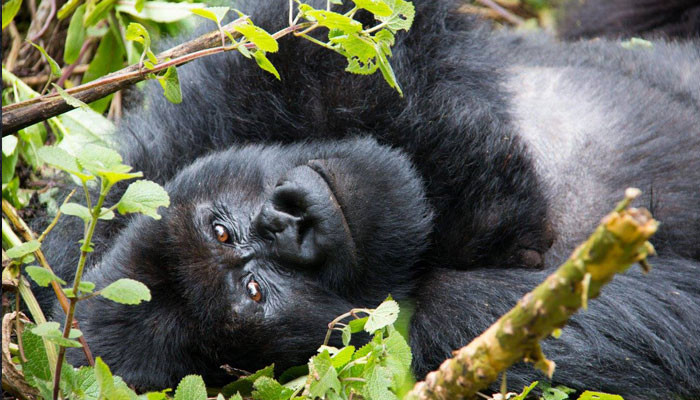 A silverback among the leaves. Image c/o Amanda Linardon

Back in the forest and I know my 60 minutes is almost up. It’s an incredibly short amount of time to absorb the magnificence of these animals, but I understand it’s necessary to limit human contact. So I treasure every minute I get with them. Being an arm’s length away from them I realise how remarkably similar they are to us and during this brief time I feel like I’ve developed some sort of connection with them. And I leave comforted in the knowledge that my visit has in some way helped the mountain gorillas survive another day. I have faith that someday they will be thriving.

Top 5 tips for seeing the mountain gorillas in Rwanda

See mountain gorillas for yourself on a Peregrine small group tour in Rwanda or Uganda.

Amanda is not one to sit still for very long - when she's not eating her way around the world, hiking through national parks or rubbing shoulders with the locals on the train, she's likely to be researching her next adventure. On the rare occasion when she isn't thinking about travelling, Amanda loves to get around on her bike, cook a different cuisine every night and drum up PR for Intrepid Travel.