Why Madagascar could be Africa’s hot new destination 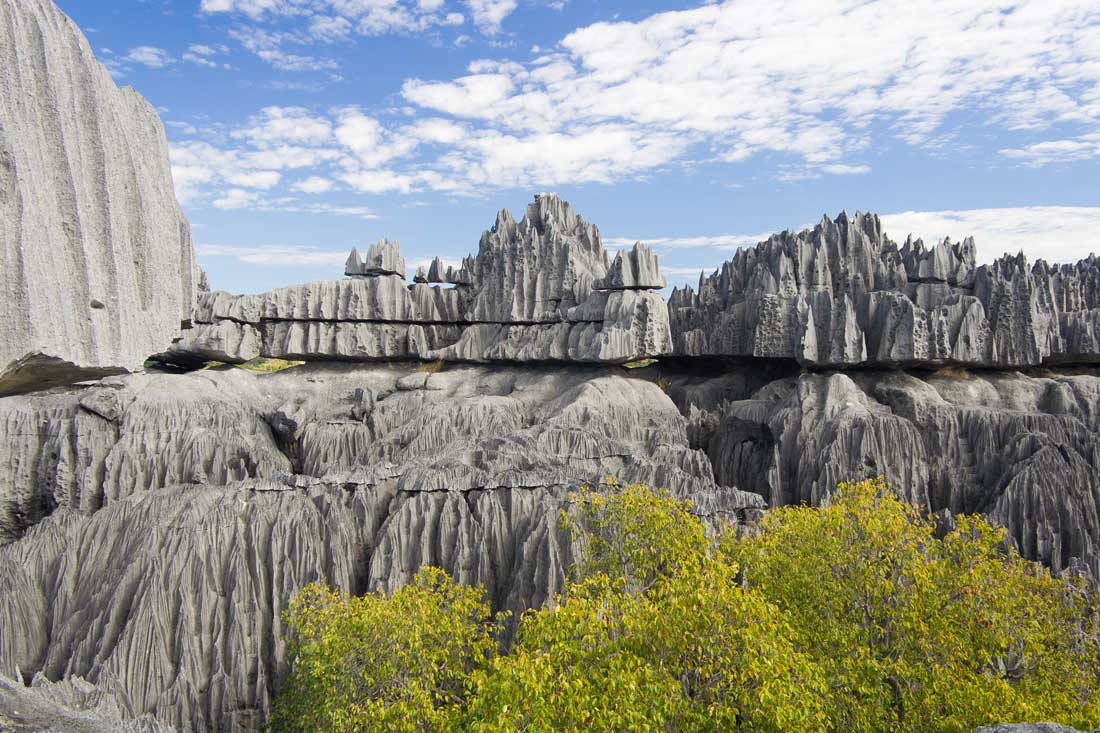 The island of Madagascar sits all alone in the Indian Ocean, separated from Mozambique by 250 miles of inky blue water.

It’s an interesting country, an evolutionary cul-de-sac where nature has been allowed to evolve without interference for over 88 million years. When the continents shifted, Madagascar broke away from the Indian peninsula and drifted west, taking with it some indigenous plants and animals. Today, their ancestors make up 5% of all animals everywhere, and over 90% of the island’s wildlife is found nowhere else on the planet. Given that level of biodiversity, it’s strange Madagascar doesn’t draw the crowds of nearby safari destinations like Kenya and Tanzania. There are still national parks around the Tsaranoro Valley that get only a few hundred visitors each year (to put that in perspective, over 90,000 tourists travelled through the Serengeti in 2015). Hiking the back trails of the Isalo NP, you’re more likely to spot ring-tailed lemurs and dancing white sifakas than other people. 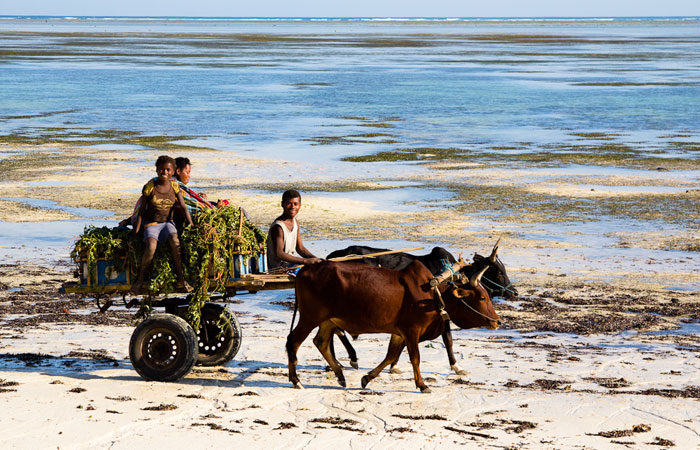 Basically Madagascar is what every traveller is searching for: the next big thing. A destination with a lot to offer that nevertheless hasn’t been ‘discovered’ by selfie-stick waving tourists and big bus convoys. In fact Madagascan tourism is still in its infancy. The roads are often unsealed, bumpy and remote. Flight routes into Antananarivo are pretty limited. There’s very little modern infrastructure once you step outside the cities, and village life in places like Zafimaniry hasn’t changed much in centuries. For anyone who’s done the ‘classic safari’ it’s a chance to see a different side of Africa. Something unspoiled, wild and totally unique.

Here’s why Madagascar deserves a spot on your 2017 Bucket List. 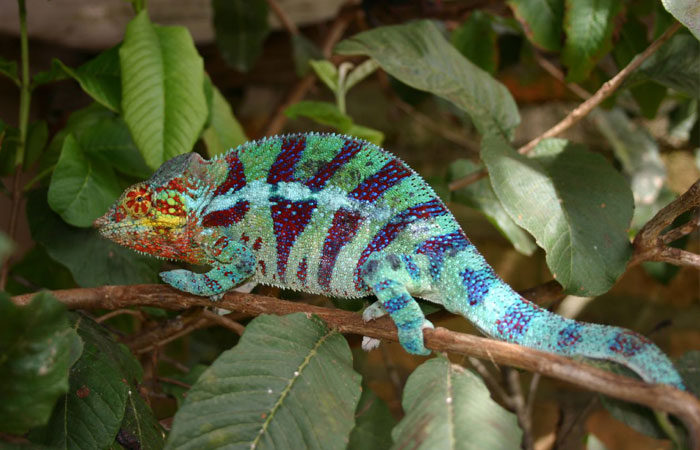 Start with the obvious, right? Madagascar, a little like the Galapagos Islands, the Amazon and the Great Barrier Reef, is one of the world’s most important and unspoiled zoological ecosystems. Nearly every animal you’ll see on your trip is endemic to the island. Found nowhere else on earth. There are over 103 species of lemur alone (Isalo NP, Anja Reserve and Ranomafana are some of our favourite lemur-spotting destinations). There’s the legendary fossas, the island’s only carnivorous mammal, 300 types of birds, 260 species of lizard, plus chameleons, frogs, rays, turtles and even Humpback whales in the winter months. Madagascar’s ecosystems are under threat from deforestation, development and charcoal burning, but conservation efforts from organisations like WWF are beginning to make a difference. Tourism will hopefully play a big part in that conservation. Walking tours are the best way to see the island’s wildlife – Madagascar has no serious predators, at least not of the man-eating variety, so the safari jeeps are unnecessary.

The class Madagascar route runs from and capital of Antananarivo down to the south west coast at Tulear. Along this route there are dozens of opportunities for hiking, trekking and nature walks, depending on your level of fitness. Hard-core mountaineers will want to head to Andringitra, the island’s central mountain range, for an attempt at the summit of Peak Boby, Madagascar’s highest ascendable peak. For our tour though, we prefer something a little more sedate: maybe a 6-kilometre hike to Piscine Naturelle in Isalo National Park, a crystal clear natural swimming hole, fed by a waterfall and surrounded by shady trees. Or a hike through the forests of Anja, a small community-based reserve that’s trying to fight back against local deforestation (it’s also home to over 300 ring-tailed lemurs). Madagascar’s biggest advantage over more traditional trekking destinations is the crowds – there simply aren’t any. 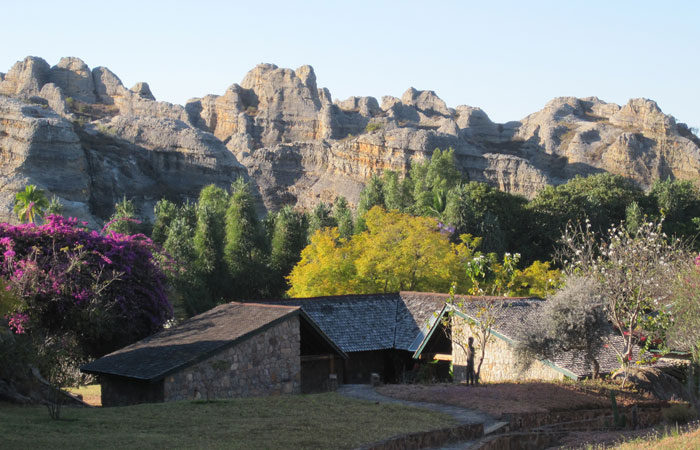 One of the perks of visiting somewhere a little unusual is staying in unusual places, and meeting unusual people. Our Magic of Madagascar tour includes a couple of ‘feature stays’ en route – places that go way beyond a comfy night’s sleep. They’re a sign of what tourism in the country could become: local, sustainable, culturally immersive (and a lot of fun too). The first is Relais De La Reine, right in the middle of Isalo National Park. Set on a 40-hectare block, on the banks of a small river, the buildings are cut in and around the scattered boulders of the Isalo massif. It’s a tranquil spot that’s been running as an upmarket hotel since 1993. Our other ‘feature stay’ is Tsara Camp in the Tsaranoro Valley, a tented camp in the South African style, set beneath the sheer rock faces of Chameleon Mountain, Tsaranoro Mountain and the high peaks of Andringitra NP. It’s a taste of local Malagasy culture, in some of the most beautiful surrounds you’ll ever see. 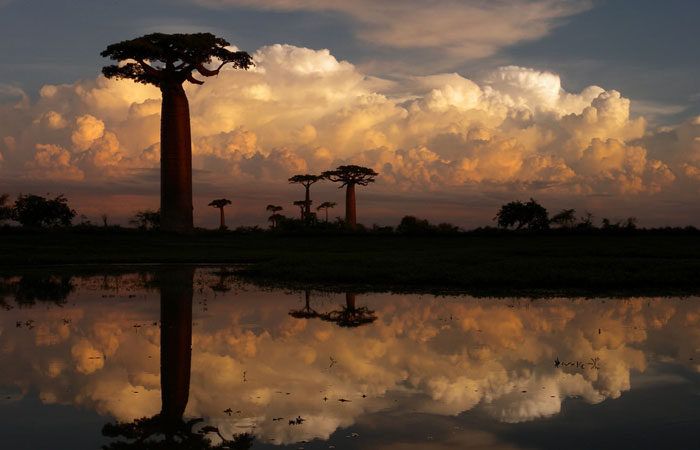 Madagascar is home to seven of the nine existing species of baobab trees, six of which are endemic to the island. They make up an important part of the country’s dry deciduous forests and can grow up to 30m tall. Baobabs are well suited to the dry conditions on the island, and can store up to 100,000 litres of water in their trunk. The most famous examples in Madagascar are the Avenue of Baobabs between Morondava and Belon’i Tsiribihina in the Menabe region, but we know somewhere even better. On the second day of our Madagascar tour, in Ifaty, we wait until twilight then set off on a 20-minute walk along a sandy track, at the end of which is a private candlelit dinner at Reniala Park, beneath the spreading branches of ancient baobab trees. Not a bad way to spend and evening.

Want to explore Madagascar for yourself? Have a look at our Magic of Madagascar small group tour.