Travelling the Silk Road in Uzbekistan

Merely a mention of ‘The Silk Road’ conjures up images of a bygone world, a world of ruined cities and crumbling caravanserai, remote trading outposts and unforgiving terrain.

The Silk Road was far more than a singular trade route between the ancient imperial Chinese capital of Xian, and a myriad of European and Middle Eastern cities. Its labyrinthine trails followed rivers, traversed deserts and crested mountain passes, shipping precious silk and other goods through the heart of Central Asia.

A few years ago I fulfilled a long-held dream of taking the ‘Golden Journey to Samarkand’, undertaking a Peregrine Adventures itinerary through Uzbekistan. More than any other country, Uzbekistan’s icons embody the spirit and legacy of the ancient Silk Road. Despite the cultural ravages of the 19th century Russian annexation and the Soviet Union, Uzbekistan today has much to show for its rich history. 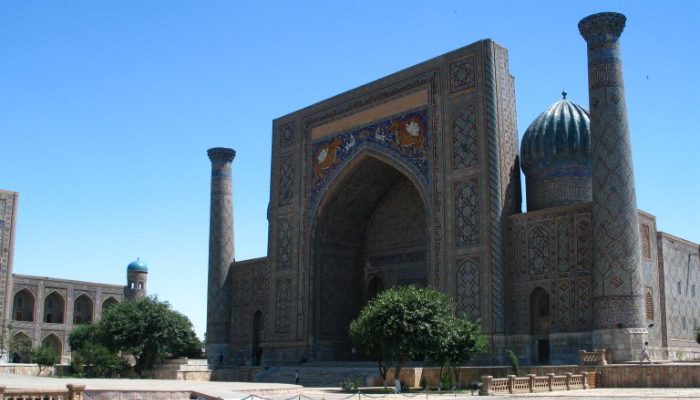 First stop down the road was Samarkand and the famed Registan, one of the Islamic world’s most breathtaking examples of Persian-inspired architecture. The cool-blue tiles of its domes and intricate mosaics of its edifices exude the confidence of Tamerlane and subsequent rulers.

Nearby was a vegetable market, where the friendly Uzbek vendors were happy to pose for photos in their distinctive skull caps. One elderly gentleman carried himself like the local mayor. The girls had eyebrows joined together by eyeliner, their smiles exposing silver-capped teeth. The local speciality is melon of all varieties; the colours and flavours have to be experienced to be believed.

I knew what to expect of Samarkand, but was blown away by the old city of Bukhara. Whereas Samarkand is spread out, Bukhara’s UNESCO World Heritage-listed centre is compact and appears not to have changed in centuries. You could almost smell the camels and mules that rested here long ago, hear the cracking whips of traders as they got their caravans back onto the road. 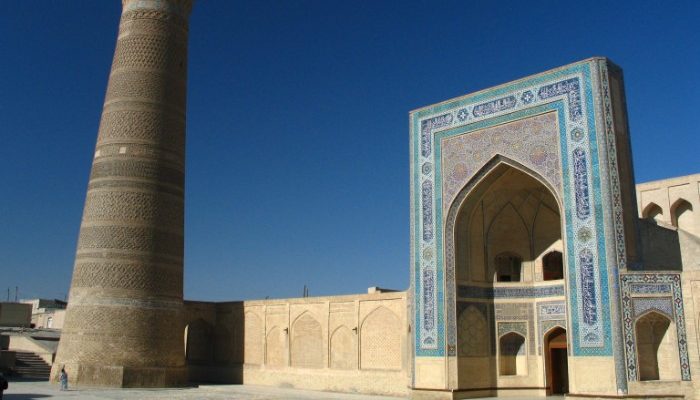 The spectacular Ark Fortress appeared unchanged since British spies Stoddart and Conolly were beheaded in 1842. From atop the 12th-century Kulan Minaret – so astounding that the invading Genghiz Khan ordered it be spared – local khans had criminals and adulterous wives thrown to their deaths.

Seeking something a little less grim, I found serenity in the Lyabi-Hauz, a plaza surrounding a pool and shaded by mulberry trees under which old men drank tea and played chess. Local youths jumped ten metres from an ancient tree into the water. It took me back to the summers of my childhood at Balwyn pool.

Our hotel here was a 19th-century merchant house, restored with all the amenities and comforts of a boutique guesthouse – oozing with period charm and located right on the edge of the Old City. We spent a couple of magical evenings on the rooftop terrace with an after-dinner drink, looking out across the rooftops and up at the stars. 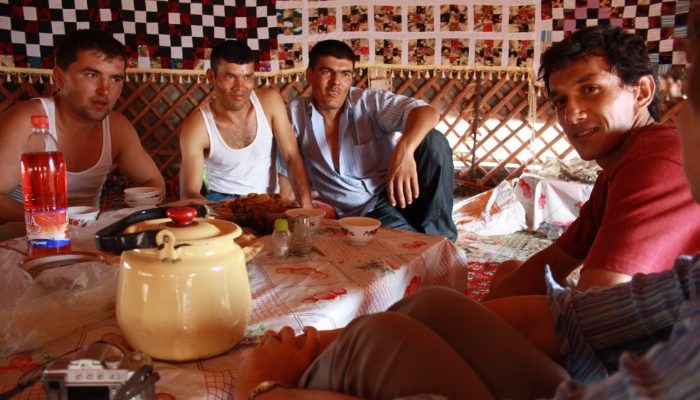 On the road to Khiva our tour leader Oleg (Ollie to us) spied a nomad family camped near a lake; we pulled over to say hello. The proud patriarch invited us in for tea and to show off his latest grandson. Our group was enthralled. According to Ollie, true nomads are a dying breed, which is why he took the opportunity to offer us a glimpse into an ancient lifestyle.

Ollie was a great character, purportedly Muslim (‘on the outside’, he said), and yet a connoisseur of Russian beer, which we appreciated most nights with dinner. He had been in the Soviet army but was not complimentary of Soviet rule. He was proud of Uzbek culture and its rich history, and his passion and humour was infectious.

Khiva provides a picture-postcard view of Silk Road history. Even more evocative, however, were the  mud-brick fortresses, mosques and outposts we passed on the road through the arid Kyzyl-Kum desert, telling of hardship and folly through the ages. The highlight of Khiva was a visit to a local family’s house, where we enjoyed a home-cooked feast of kebabs, roast lamb, pilov and salad. Our hosts were truly gracious – albeit slightly bemused – in the face of our group’s thank-you rendition of the Richmond theme song.

Travelling in comfort with a small group of like-minded individuals and with an affable local to guide you is definitely the best way to unlock the secrets of a culture and engage with the local people. As well as having had a wonderful holiday, I left Uzbekistan feeling enriched. Not only had I walked in the footsteps of the ghosts of the Silk Road, but had ticked off a series of long-held ambitions and not been in the least bit disappointed by their 21st-century reality. I had experienced the very palpable ambience of the Silk Road, and the warmth and hospitality of its modern-day people.

Explore the historic Silk Road of Uzbekistan on a premium small group adventure with Peregrine.

I've spent several years joining up the dots on the map between Beijing and Morocco, my favourite part of the world. I like the food and the people, mosques and ancient ruins, and in my spare time I collect cowrie shells and take photos of cats.