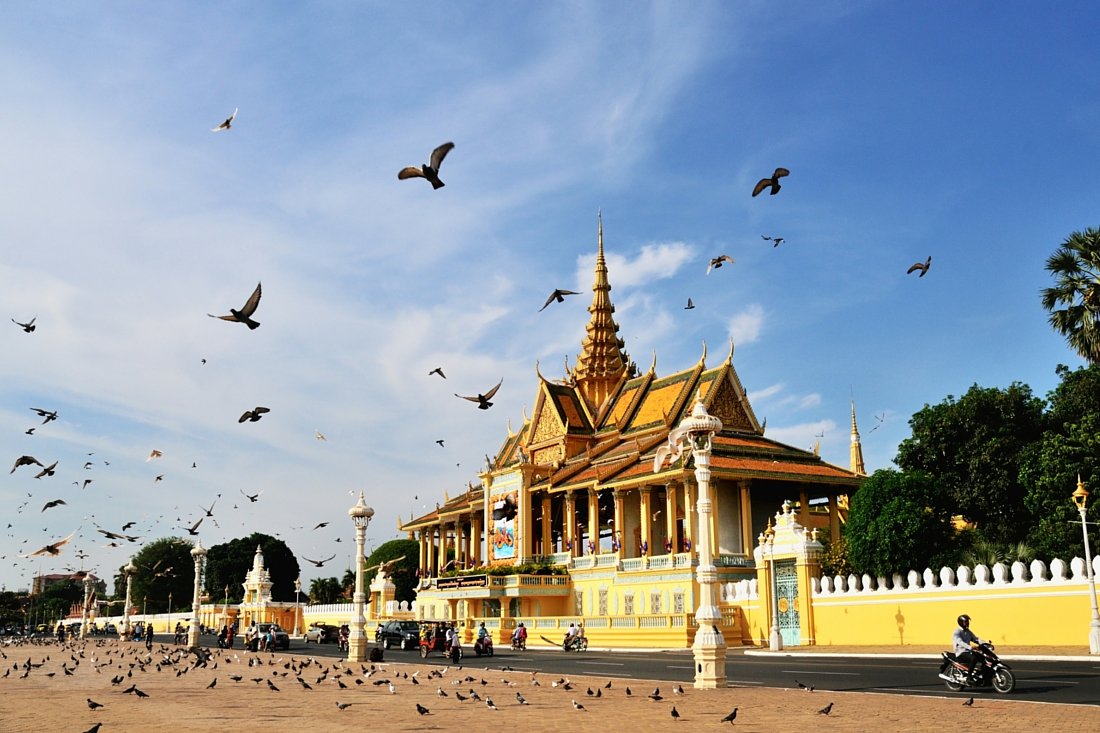 It reads like a quiz question: “What capital city has streets named after Charles De Gaulle, Mao Tse Tung, Tito, Pasteur, and Jawaharlal Nehru?”. In case the headline didn’t give it away, it’s Phnom Penh.

In this city, which walks in the present while shrouded in shadows of its past, you’ll find enough history to keep you exploring for days. But if you’re only here for 24 hours, here’s how to make the most of your stay. 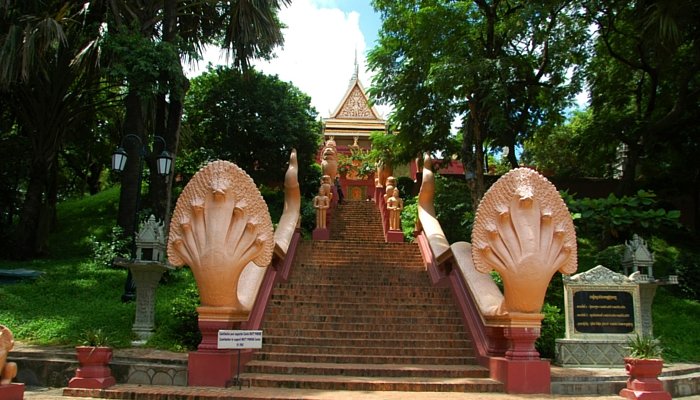 Start your morning before the traffic gets too heavy with a cyclo ride, taking in the stately colonial buildings that are relics of Phnom Penh’s former glory. Invented by French engineer Maurice Coupeaud in 1937, the cyclo-pousse (a bicycle-powered tuk-tuk) became popular after he rode one from Phnom Penh to Saigon in around 17 hours – not bad, considering the journey in a motor vehicle takes about six hours!

Pedal down Phnom Penh’s wide avenues to the Independence Monument. Renowned Cambodian architect Vann Molyvann designed the structure to commemorate Cambodia’s independence after almost a century of French colonisation. Nearby, a statue of King Norodom Sihanouk, who led the crusade for independence from the French, has recently been constructed in his memory.

A short distance away, down Norodom Boulevard, you’ll pass stately French Colonial mansions and Sisowath High School, the first secondary educational institution in Cambodia. A number of senior Khmer Rouge leaders were schooled here, including Pol Pot. As you continue, look our for Wat Phnom, a temple on a small hill, and Hotel Le Royal, which is packed with interesting history and has seen guests such as Charlie Chaplin and Somerset Maugham. 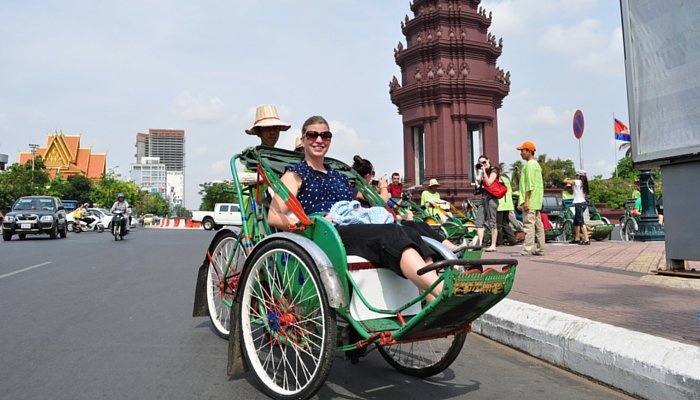 A cyclo ride past the Independence Monument

After all that cycling, you’re probably a little hungry, so stop for a late breakfast at the Phsar Thmei or Central Market. A good Cambodian breakfast to try is noodle soup (kyteow) — thin, white rice noodles cooked in a soup with meat or seafood, bean sprouts, and lime. Bobor (rice porridge) is another favourite, served with either fish, chicken or salted egg, as well as thinly sliced ginger, bean sprouts, and lime. Or dig into fried chicken or pork on rice, both regular Cambodian staples.

At the Central Market, keep your eye out for cotton krama, a traditional scarf favoured by farmers that has become a symbol of Cambodia. This is also a great spot to pick up some of Cambodia’s famous Kampot pepper, which is considered one of the best peppers in the world. It was once said that there was not a fine restaurant in Paris that did not have Kampot pepper on the table.

If you haven’t made it to Angkor Wat, head back to the riverfront area and check out some of the amazing Angkorian artefacts at the National Museum of Cambodia, not far from the Royal Palace. The inviting courtyard garden here is welcome escape from the hustle and bustle of Phnom Penh’s streets. 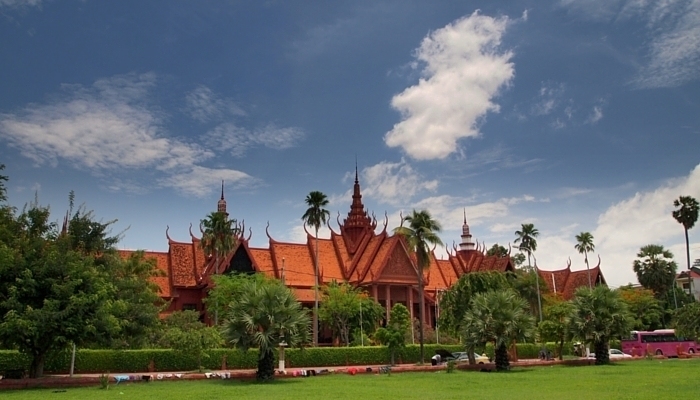 Continue exploring just around the corner on Street 178. The Reyum Institute of Arts and Culture is a non-profit organisation dedicated to Cambodian art and culture, and is opposite the Royal University of Fine Arts. The entire street is lined with shops selling paintings of Cambodia’s countryside and Angkor-inspired artwork.

Stop for a delicious lunch and support a great cause. Friends the Restaurant is one of Mith Samlanh’s training restaurants, dedicated to helping former street kids and marginalised youth learn about and gain employment in the hospitality industry. Next door, Friends ‘N’ Stuff sells interesting knickknacks, clothes, and artwork that provides income for local communities.

Wander along the riverfront boulevard, which has been restored to its French colonial splendour thanks to a massive aid project. The early evening is a great time for people-watching as locals, expats, and visitors take in the riverside breeze and a spot of exercise. Watch the Khmer aerobics or pop into the Foreign Correspondents Club or The Quay for a refreshing pre-dinner drink. Both have balconies with great views of sunset over the river. But you’ll need to get there early if you want to snap up a riverside seat — they disappear quickly!

Evening and night: 5pm until late

If you’re in the mood for some up-market Cambodian food in a chic setting for dinner, Malis Restuarant is the place to be. Run by well-known Cambodian chef Luu Meng, the surroundings are delightful, the menu extensive, and the food fresh, modern, and delicious.

Alternatively, order your food with a side of history at Tepui at Chinese House. Located on the Sisawath Quay just away from the main tourist area, the building was constructed in 1904 by a merchant and member of the Phnom Penh Chinese community. The atmospheric restaurant and bar serve up an interesting combination of South American cuisine and Asian-inspired cocktails.

After some traditional Khmer street food instead? Try one of the barbecue restaurants serving inexpensive seafood, beef, and other barbecue dishes around Phnom Penh – they’re everywhere! Businesses here go in and out of popularity quickly, so our best advice is to look for stalls that are crowded with locals. Street food is best enjoyed with an ice-cold beer, served in chilled beer towers or by the can.