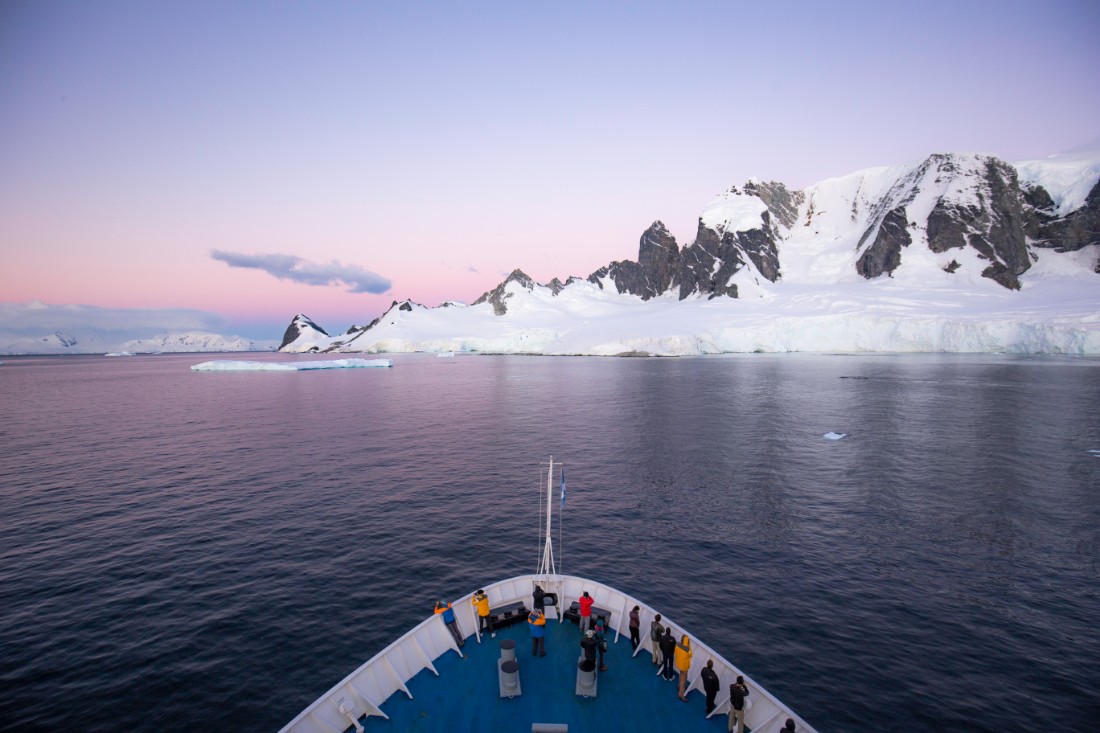 On my recent Antarctica expedition with Peregrine Adventures, there was the big question. What would we find on The Drake Passage?

It was the question we discussed as we explored the streets of the tiny Argentinian harbour-town of Ushuaia. The sun was out, and the view over the Beagle Channel promised a sedate and picturesque start to our journey. We had arrived in Ushuaia via a flight from Buenos Aries that morning – a flight that culminated in an approach over the snow-capped peaks of Patagonia and the southerly archipelago of Tierra Del Fuego.

From an old viewing platform overlooking the harbour, we could see our home for the next eleven days – the “Ocean Endeavour” – riding calmly at anchor, waiting for us to board in a couple of hours once she was ready.

Pulling out of the harbour in the late afternoon, the sky was still clear and blue and the sea a hypnotising and sparkling girdle for the islands of the archipelago, with all their sharp peaks and steep valleys.

By the time the sun went done, passengers were beginning to mingle more comfortably. We’d sat together through the introductions of key personnel, led by the inimitable Expedition Leader, Chelli. We’d memorised the emergency evacuation points, noted carefully the drill for launching the lifeboats, familiarised ourselves with our cabins and, importantly, discovered the delights of the shipboard cuisine. Most of us stood on one of the open decks to watch the sun set behind few high clouds over the Beagle Channel. 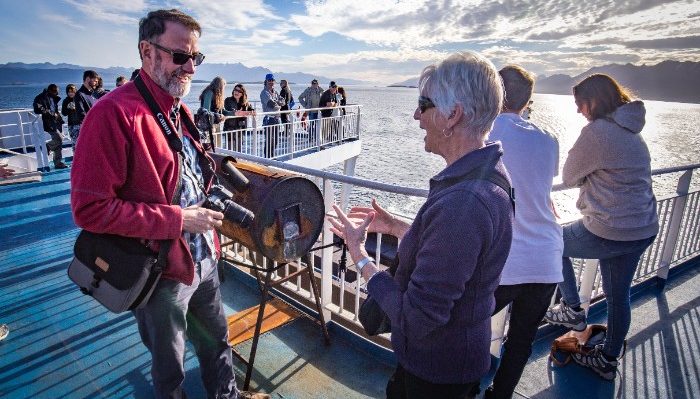 The following morning, when we woke for breakfast, we were well into the Drake Passage. The sky was still blue, the sea had a gentle swell going, and the Ocean Endeavour was leaving a clear wake for the few sea birds scavenging behind us. Later in the day, the opportunistic albatrosses were swooping and diving, gliding and soaring behind us, across the wake and alongside the stern of the ship. They heralded the gradual darkening of the sky over the next few hours; the ship’s roll became more noticeable.

“Remember, everyone – in this weather, one hand for you, one hand for the ship!” Chelli reminded us (the first time of many over the next 24 hours). By dinner that night, walking into and out of the dining room required great care, and venturing onto the outside decks became an adventure. Still the albatrosses careened across our stern. 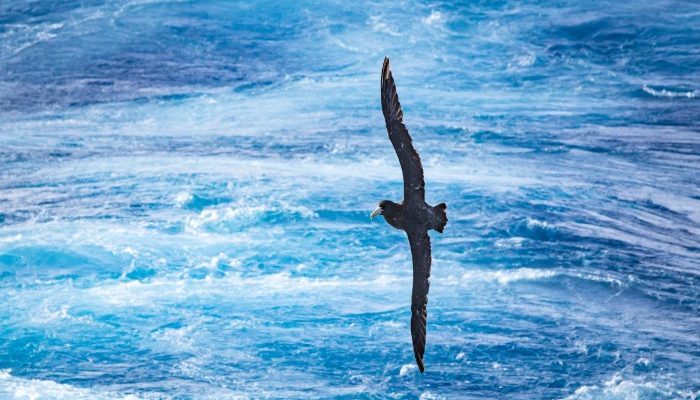 A southern giant petrel swoops above the water.

Overnight, the roll of the ship became constant that everyone managed in their own way. My cabin companion woke at one stage, wondering why he was lying on the steel wall of the cabin rather than on his bed, which for some inexplicable reason was rising on his right side – then the boat rolled in the other direction and suddenly he was back on his mattress again. In the morning at breakfast, there were tales of passengers who had rolled completely out of their beds.

For the rest of the day, there was the constant reminder ‘Remember, one hand for you…”. The forward decks were closed over the next few hours as we pitched and rolled our way across Drake’s Passage. Snow started falling, the wind picked up ferociously and waves were crashing over the windows on the fifth deck with each roll and pitch. Passengers ventured onto the rear deck – the only one that remained open – with the greatest of care. 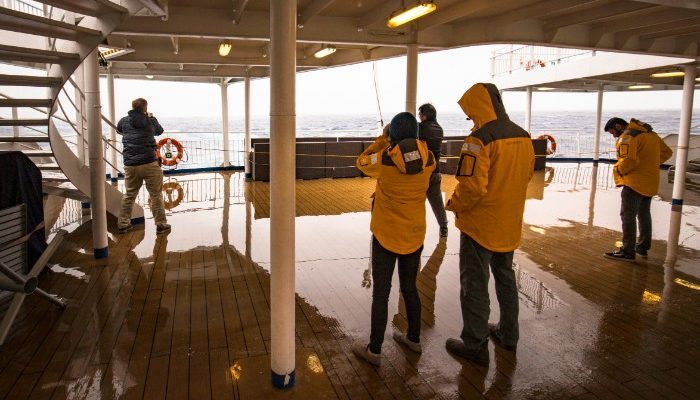 Checking out the wild weather on the back deck.

“Seas have reached 11 metres and the wind has peaked at 50 knots” came the announcement in the early afternoon.

“Okay,” we thought, “This is rough. We are earning our right to cross the Passage!”

Finally, it got too much for some. My cabin-mate and I decided to go and lie down in the mid-afternoon, and let the mattress cushion our bodies as the ship negotiated the worst swell of the season. Somehow, we both fell asleep, until…

“For those who haven’t noticed it yet,” came Chelli’s voice over the PA, “We have entered the calm waters of the Palmer Archipelago – come up on deck and catch your first glimpse of Antarctica!”

Somewhat startled and excited beyond our control, we both jumped off our respective beds and scrambled for the porthole.

“Hey – we’re not rolling around any more!” I said. (Talk about a talent for stating the bleeding obvious.)

We had done it. We had crossed the Drake Passage and were, indeed, catching our first glimpse of Antarctica through the gently falling snow. The contrast in mood and weather was extreme. We had gone to bed in the mid-afternoon, while the ship was being tossed about like a cork in the ocean, and were getting slowly fed up with oceans in general. We awoke in calm waters with Antarctica dominating the view from the port holes and from the decks. All was forgiven – this is what we came for. 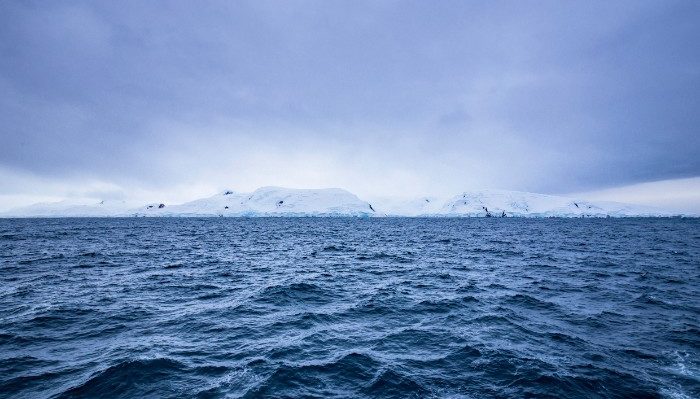 The first view of Antarctica is something you never forget.

The experience of Antarctica is a tale for another occasion – suffice to say it was magnificent in a way I could not have imagined.

Our return crossing of the Drake Passage, seven days later, was a complete non-event by comparison. The swell got no higher than two metres at any stage – not that it would have mattered. We all spent that time on the return journey reliving the many memorable moments and processing our experiences on what must be one of the most remarkable trips available on the planet.

All photos by Liam Neal.

Embrace your spirit of adventure on a Peregrine voyage to Antarctica.

Trekking, hiking, walking & wilderness enthusiast. Prolific amateur photographer. Father. Grandfather. Camino and Antarctica are highlights of my recent adventures. When I’m not out experiencing the wild diversity of the world, or playing my part as an education leader, I’m happily trolling travel blogs - Monty Python and Game of Thrones references anyone? Forgive me, but Moody Blues songs are the soundtrack to my life.