Dark tourism: is it ever okay? 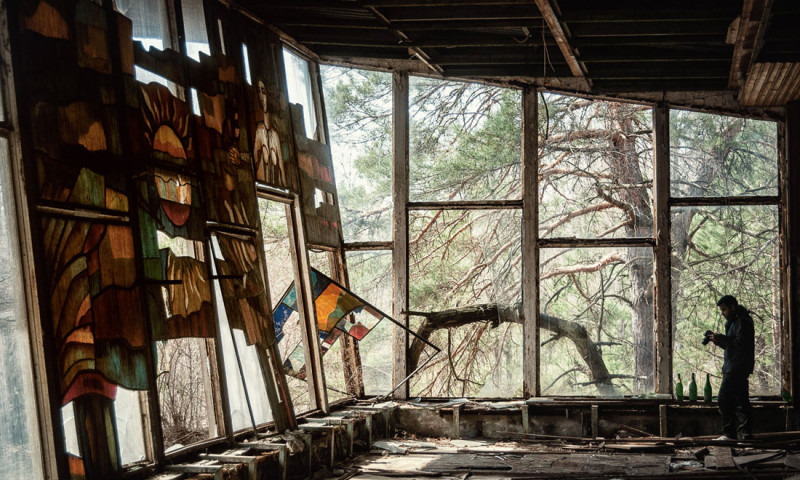 It was on a recent visit to Chernobyl in the Ukraine that I started to question the motives behind so-called ‘dark tourism’. There we were, standing in front of the reactor that caused the deadliest nuclear accident in history, and members of my group were taking selfies.

Initially this made me uncomfortable. I felt it wasn’t really appropriate behaviour for such a place. But then I started to question whether visiting at all was appropriate. Why were we there? Were our motivations purely voyeuristic, like rubbernecking drivers crawling past a car crash, or is there something else at play?

The Chernobyl disaster happened in April 1986. It began with an explosion in one of the reactors at the nuclear power plant. The people in the nearby towns weren’t immediately told that there was a problem, so went about their normal business for a couple of days, although many reported feeling ill during that time. The Soviet government finally admitted to the accident only after the radiation cloud reached Sweden and triggered alerts there. At that time the towns around Chernobyl started to be evacuated, with people being told to take enough possessions to last for 3 days, after which time it would be OK for them to return home. Of course, they were never allowed to return home and many of their personal possessions still remain in the ghost towns around the site. 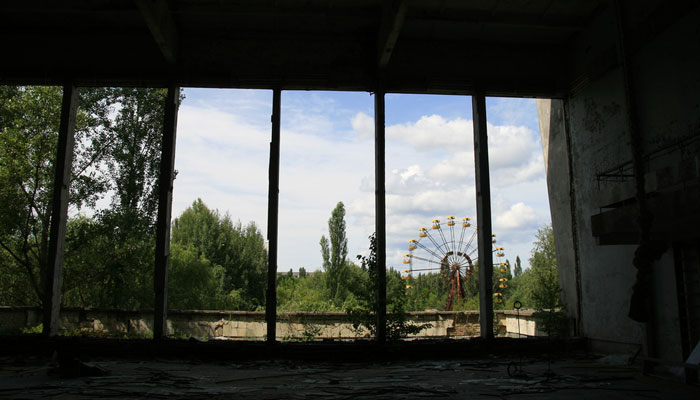 The accident resulted in many deaths and illnesses, predominantly among the emergency service workers who rushed in to contain the fire and prevent the spread of radiation. But there has also been a high incidence of cancer and also congenital defects in children born to survivors of the accident.

These days the site really is a ghost town. There are buildings falling down, cracked and peeling paint work, posters still on the walls of schools, shopping trolleys in the otherwise empty supermarket, and the remains of a funfair that was built for Labour Day celebrations and never used. Walking through the kindergarten was especially harrowing, with children’s toys and shoes still scattered throughout. I was 5 years old at the time of the disaster, and to think that these children would have been about my age, and are now starting to have children of their own, without any idea if they will be affected or not, is tragic.

Our visit was strictly controlled. Our guide carried a Geiger counter and there were certain parts of the site where we were only allowed to spend limited time as radiation counts were still quite high. We also had to undergo a body scan on the way out to make sure we hadn’t been contaminated. 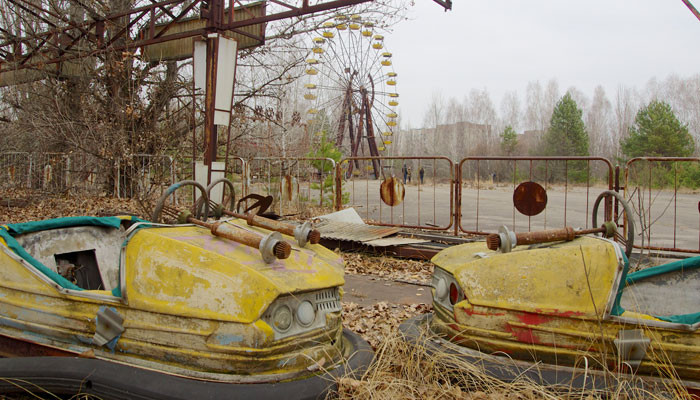 Chernobyl was of particular interest to me as, although I was really young, I do remember it happening and remember watching about it on TV and learning about it in school. But in general, I’ve always had a deep interest in history (and in fact majored in it at university) so when I travel I enjoy seeing places where major historical events happened. Not all of these are dark (I’ve stood on the steps of Rathaus Schoneberg where JFK made his famous ‘Ich bin ein Berliner’ speech, and seen the spot where Lewis and Clark completed their crossing of the USA), but as history is often shaped by tragedy, many of these kinds of places are macabre, such as Auschwitz, Cambodia’s Killing Fields, or the World Trade Centre site. On the other hand, I drew the line at doing a tour of the area most affected by Hurricane Katrina in New Orleans. I’m not sure why I felt differently about that particular experience. Perhaps because people are still living there and trying to go about their normal lives. Tourism felt intrusive, voyeuristic. 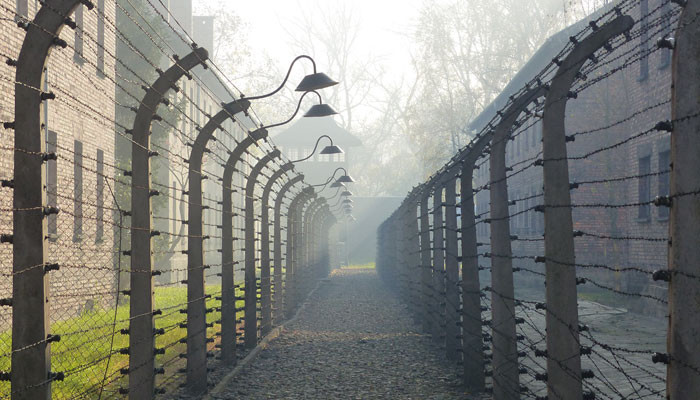 The fact that a lot of these sites are home to memorials or museums seems to suggest they want visitors to come, or at least that they felt a need to regulate the visits they were getting. So there is obviously a market for this kind of tourism. And a simple Google search suggests that it is a market that’s growing. So based on this, when is it appropriate to visit such a site? How soon is too soon? Earlier this year a company advertised ‘horror tours’ to Australia’s Belanglo State Forest which was the scene of one of Australia’s worst serial murders in the 1990s. This caused an outcry from the families of the victims and the tours were removed from sale. On the other hand, Auschwitz was the scene of one of the worst mass murders in all history, but many people travel to Poland specifically to visit the site. So what’s the difference between the two? Is it time? Or is it the intention behind the visit and the way the experience is structured?

How do local people who were forced to evacuate their Chernobyl homes and leave behind their belongings at short notice feel about tourists coming in for a look. Are they grateful that someone, somewhere, still remembers? And what is appropriate behaviour when you are at such a site? Are photos OK? What about selfies? Auschwitz has banned people from carrying flags to stop from turning it into a focus of nationalism, so why is dressing in green and gold and yelling ‘Aussie, Aussie, Aussie’ OK at Gallipoli?

What’s your experience of dark tourism? Why do you choose to visit or not? Where do you draw the line?

As a child, one of Claire’s favourite toys was the world globe in her family’s living room. This fascination with the world grew into a passion for travel. She also enjoys dancing, reading and dessert, especially when these can be done while travelling. Her favourite travel experiences are snorkelling alongside a turtle in the Galapagos Islands, gaining 5kg of baklava in Turkey, and stalking the Kennedy compound in Cape Cod.