The 5.30am wake-up doesn’t fill me with joy. When the undulating tones of a harp breaks the silence of my hotel room, I’m tempted to hit ‘snooze’, bury my phone under my pillow, roll over and go back to sleep.

But Bon, my leader on a 15-day small group adventure around Vietnam, was so excited about it at dinner last night that I couldn’t leave him – and the other early risers in my group – in the lurch. Besides, when would I get the opportunity to experience something like this again?

We meet in the hotel lobby just before 6am – me, Bon, and six other early birds – and head out onto the streets of Hanoi. There’s an ever-so-slight chill in the air; the city’s punishing humidity will make itself known in a few hours, causing hair to frizz and foreheads to glisten. Beating the heat is actually a great reason for such an early start.

It feels as though the city has been awake for hours. The streets are already filled with motorbikes, honking and weaving their way around men pushing carts, slowly ridden bicycles laden with fresh flowers, and shopkeepers sweeping the detritus of the night before into the gutter.

We’re on our way to Hoan Kiem Lake to start our day as the locals do: by exercising. 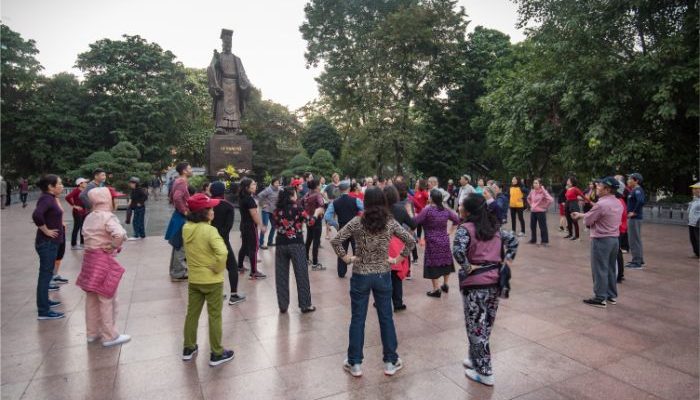 Starting the day with a stretch.

Even at this early hour, the lake is a hive of activity. Joggers and walkers dodge wayward dogs, out for a morning stroll. We pass a group of women dressed in lycra bike shorts and crop tops, dancing energetically to Latin beats sounding from a small stereo, which is hooked up to a massive Marshall speaker. Their instructor, a woman who looks to be in her fifties, shouts directions while pumping her arms in the air wildly and doing a jump-step-kick movement with her feet.

Further down the path, a small cluster of men mirror one another’s movements in a tranquil display of tai chi, a stark sight in comparison to the group of young men beside them pulling out the sort of breakdancing moves you’d expect to see on a New York subway.

Not far from them, ballroom dancers twirl across the path, skirts billowing out, nonchalant looks on their faces; one man practices the two-step on his own, an imaginary partner in his arms, while a woman in a red dress gazes at Bon, beckoning him with a wide smile to dance with her. He politely declines; we’ve got a yoga session to get to. 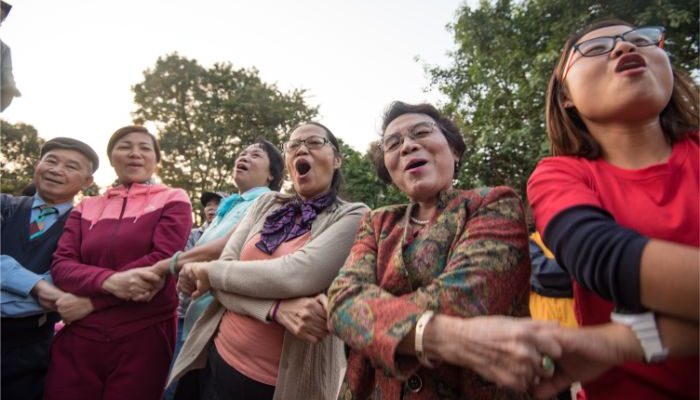 Noise is an essential element of this type of yoga.

But a yoga session at Hoan Kiem Lake isn’t what you might expect. There are no mats, no downward dogs, no tree poses, no cross-legged body twists. There’s also no tranquillity, no silence. Instead, participants laugh. Loudly. They throw their arms in the air, and yell ‘HA! HA! HA!’. They clap their hands together. They hoot and stamp their feet. This is laughing yoga, and it’s one of the best ways I’ve ever started my day.

When we arrive, we stand back, taking in the scene before us. I’ve never seen anything quite like it; this crowd of (mostly older) Vietnamese people, dressed in tracksuits, bright t-shirts, and garish jackets. Initially, it seems we’re just here to observe, but within minutes I’ve been grabbed by a silver-haired gent and pulled into the throng. A woman in a red tracksuit smiles at me, then pokes out her tongue and bellows a rising “ooooOOOHHHH HA HA HA”, clapping once with each HA. Everyone around us does the same; I join in too. 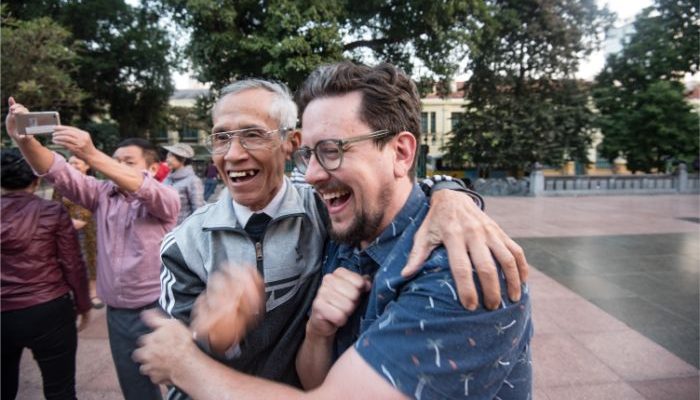 Laughing yoga has been running here for years, where sometimes hundreds of people come together for synchronized laughing sessions. The combination of yogic breathing, some simple stretches and laughter increases oxygen in the body, which releases feel-good endorphins, and then results in a pretty joyful way to start the day. Because the thing about saying ‘ha ha ha’ with a smile on your face is that it’s almost impossible not to start feeling genuinely happy.

The next exercise involves walking around and high-fiving as many people as we can while shrieking ‘hoo hoo HAHAHA, hoo hoo HAHAHA!’. The tracksuit-clad man I met earlier takes me by the hand, looks into my eyes, and – in broken English – asks me to marry him. Fortunately the crowd around us erupts into peals of laughter as I break away and return to Bon and the rest of my Peregrine group. 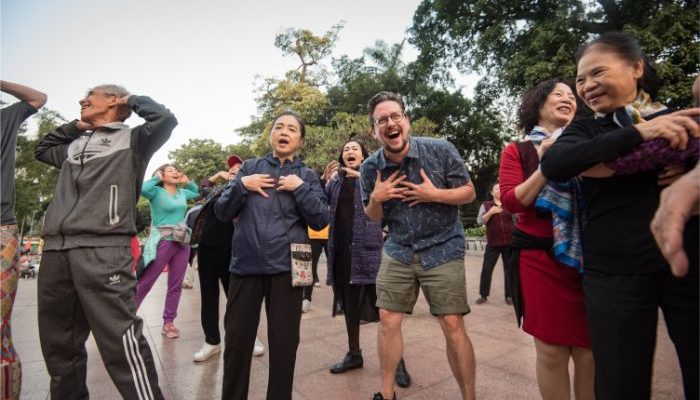 “That was hilarious!” I exclaim, unable to wipe the smile from my face. Maria, one of my travel companions, agrees, telling us “I felt a bit flat this morning but that was so energising. I feel really happy after that!”.

We slowly amble back to the hotel, where we meet the rest of our group for breakfast. “How was your walk around the lake?” one asks, yawning as he sits down with a cup of black coffee.

Explore Vietnam on a premium adventure with Peregrine. See our range of tours here.

All images by Patrick O’Neill.