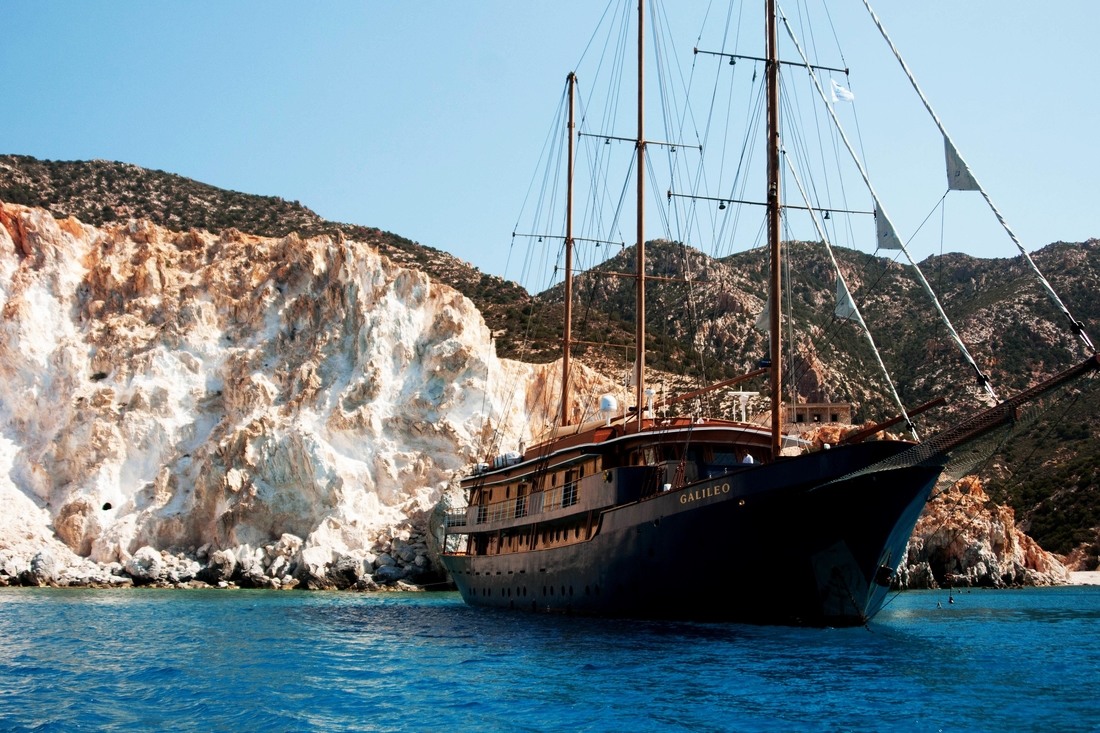 One thing I discovered before the trip even began: there is no phrase more guaranteed to induce jealousy in your loved ones than ‘I’m sailing the Greek Islands.’ Even dear friends and trusted colleagues will frost over with envy, especially when you insist on showing them pictures of your ship at every possible opportunity and saying things like ‘That’ll be me next week. Isn’t it marvellous?’ And especially when your ship looks like the Galileo, a 40-metre triple-masted yacht that appears to have sailed straight out of Treasure Island.

When we pull up at Athens’ Piraeus marina, I spot it immediately: a classic gulet of polished wood and nautical blue surrounded by white superyachts and sleek fibreglass. You half expect to see a Jolly Roger fluttering in the wind.

“See that one,” our taxi driver says, pointing to some four-storey monstrosity moored in the harbour. “That belongs to the King of Jordan. He never even sails it. Just comes down here every once in a while and stays on the boat. They have to keep it ready for him all year.” A little thrill runs up my spine. This marina is a playground for the rich and famous; yachts worth millions all gathered in one place. And for the next eight days we get to sail on one of them, out into the wide blue expanse of the Mediterranean.

Our route is an anti-clockwise loop of the Cyclades (pronounced Si-clads), a windswept archipelago in the middle of the Aegean Sea. I’d seen shots of Santorini’s blue-domed roofs and marmalade sunsets on Mykonos, but the geology of the islands here takes me by surprise. I guess in my idle daydreams I’d pictured something vaguely tropical, maybe with lush forests and white sandy beaches. But Joseph, our leader and guide, teaches us that many of these islands are technically deserts. They’re scoured by sun and salt, kept alive by underwater springs and aquifers that flow down all the way from Scandinavia. “People can’t drill too deep here,” Joseph tells us on Syros, “Otherwise we might mess up a freshwater network that runs from Norway all the way to Jordan.”

Plants that survive on the Cyclades have to be tough. Olive trees mostly, along with whippy bamboo, gnarled cedars and huge water reeds that carpet the valley floors and act as windbreaks for local houses. At sunset you’ll spot the shadow of some distant island, a dozen tiny wind turbines turning endlessly on a ridge, and your mind drifts back through the ages to a time when people actually rowed these waters. When gods walked the land.

Life on the boat is the stuff of cubical daydreams. Mornings spent reading on the sundeck. Sitting on the back bar with a drink and watching the world flow by. Breakfast buffets of Greek yogurt, fresh fruit, eggs and bacon. Chatting with your fellow passengers over a game of Scrabble or Jenga (you haven’t Jenga’d until you’ve Jenga’d on a moving boat).

Today we’re cruising to Amorgos, a small, island slightly off the main Cycladic tourist trail, and I decide to wander up to the ship’s bridge. We’d all assumed this area was off limits, but Joseph told us last night that the Captain was feeling lonely and wondering why no-one had gone to visit him (a chorus of “awww”s ran around the room). I knock on the door and the Captain welcomes me with a big smile. His bridge is a bewildering console of dials, knobs, switches, gauges, screens and wheels; Starship Enterprise meets 18th century Spanish galleon. There’s a flutter behind me. In the corner is a cage filled with two real life parrots, shifting their weight on a perch. One of them ruffles his feathers and lets out a soft squawk.

“What else would you expect on a pirate ship?” The Captain says with a grin. 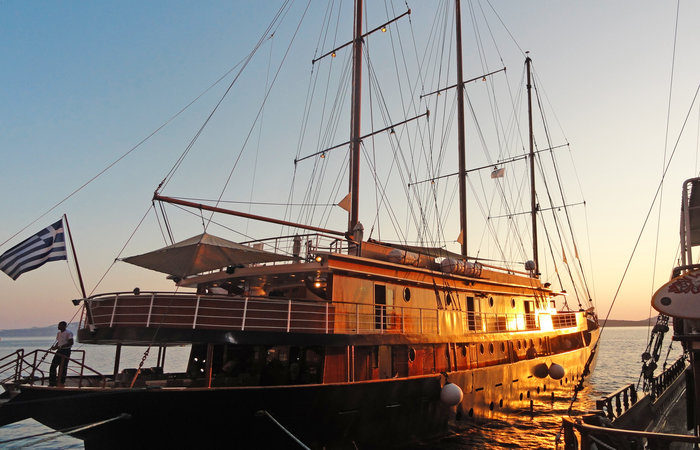 He spends a bit of time trying to teach me why the wind is measured in knots (short answer, because it’s easier) but soon we round the tip of the island, and he turns to focus on the sea. We sail serenely past the Monastery of Hozoviotissa, a rock hewn structure looking slightly out of place with neat, white washed walls jutting out from the massive cliff it was carved from.  There is a small procession of tourists making their pilgrimage up the stone steps to enter the cool of the chapel and I wonder at the tenacity and dedication of the monks who built the structure in 1017.  I look forward to our trip there later that day and hope that the view of the Aegean from the top balcony of the monastery is as spectacular as I think it will be.

Eventually, like Odysseus emerging from a fogbank, we drop anchor in a small bay on some remote island. The Cyclades are made up of about 220 islands forming a ring around the sacred isle of Delos, home to the god Apollo, but there are also thousands of ‘mini-islands’ dotted throughout the Aegean, little crags of rock, uninhabited spits and the tops of old volcanoes long extinguished. This is just one of them, a tiny bay surrounded by arid hills. I hear the crackle of the ship’s PA system, then Joseph’s friendly voice, “Hello, hello. We are stopping the boat here for an hour or so for some swimming. So if you would like to go for a swim, please change and meet us on the rear deck.”

Unlike the big cruise ships with their chlorinated pools and screaming toddlers, swimming on the Galileo takes place in the sea. It’s the tail end of summer, peak season has long past, and the air is a little brisk, but Joseph assures us the water is balmy and warm. A metal gangplank is lowered from the port deck, with steps leading down into the water, and the staff swarm around with fresh towels, sunscreen, inflatable noodles and kayaks. We ask Joseph if we’re allowed to jump in from up on the deck. Joseph laughs and says sure, “as long as you have good insurance.”

A few of our group are already in the water, splashing about and enjoying the warm morning sun. The sea looks like something out of a brochure, light dancing on the waves. “It’s lovely!” they shout. “Come on!” I climb up onto the rail, take a deep breath and dive in.

Want to sail the Cyclades? Cruise the Hidden Gems of Greece on our small ship Adventure Cruise.