Galapagos Islands: a day in the life aboard the Grand Queen Beatriz 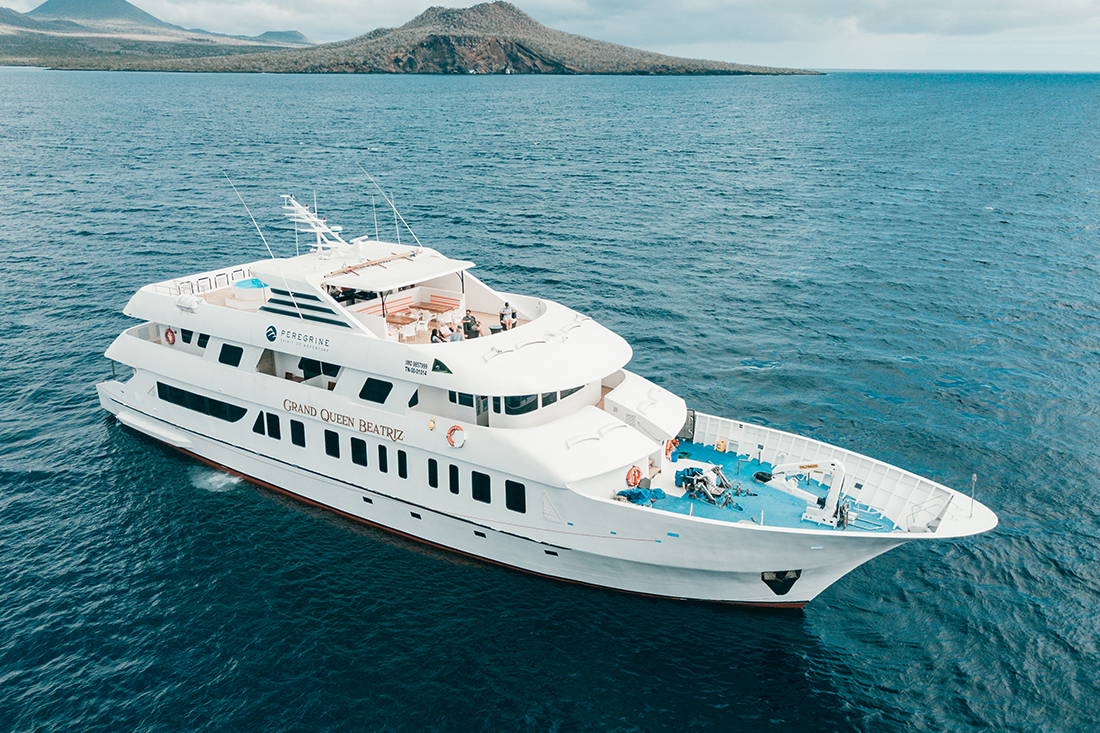 I’m not a boat person. Never have been.

I’m confessing this to my new Ecuadorian friends as they ferry me by Zodiac from the dock to the Grand Queen Beatriz, our home for the next five days in the Galapagos Islands. Don’t get me wrong, I’m saying. I can’t wait to see this boat.

‘It’s no ordinary boat, my friend,’ says Mosquito, who I later learn is the cheeky one in the crew. ‘This one is special.’ His expression recalls the Mexican street food vendor I met en route, who, when I asked for more chili, looked at me as if to say ‘just you wait’. Grand Queen Beatriz soon materialises, not so much outshining the other boats in the water as out-classing them. Her authority is quiet, her style subtle. It’s like in you see in the magazines, but not over the top.

READ MORE: RETURNING TO THE GALAPAGOS ISLANDS 20 YEARS ON

We climb aboard, leave our shoes at the entry and start our tour, starting with the dining room. The floorboards, which somebody says are teak, smell of fresh varnish. Box-fresh wine glasses jingle in their racks as the boat rocks. The bartender’s name is Jose. Someone makes a joke about him being the most important man to befriend, more important than the captain. 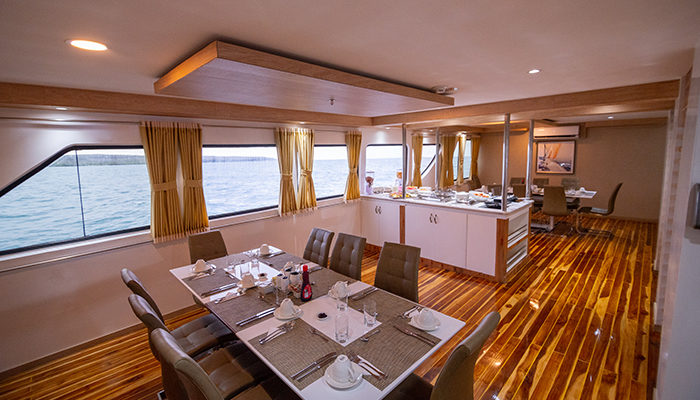 We’re assigned to our cabins, and in between exclamations of general novelty and adventure, I say to my roommate Ben that I’ve lived in freestanding houses with less bathroom space. After a moment contemplating the ocean from our cabin’s private balcony, Ben tells me to keep an eye on the horizon, just in case. Maybe he heard I wasn’t a boat person. One way or the other, his advice seems to work.

EXPLORE THE GALAPAGOS ISLANDS ON A SMALL-SHIP CRUISE WITH PEREGRINE

Mid-morning we’re back on land, exploring what we’ve come to see – the archipelago itself. In the outdoor maze of the Charles Darwin Research Station, we take staggered lectures from our resident expert, Alexis. He’s been at it for three decades, and he likes to talk. Right now, he’s discussing history, vegetation, and the baby tortoises that are training to re-enter the wild – the same ones poking their heads out at us from behind rocks in their manmade playgrounds. 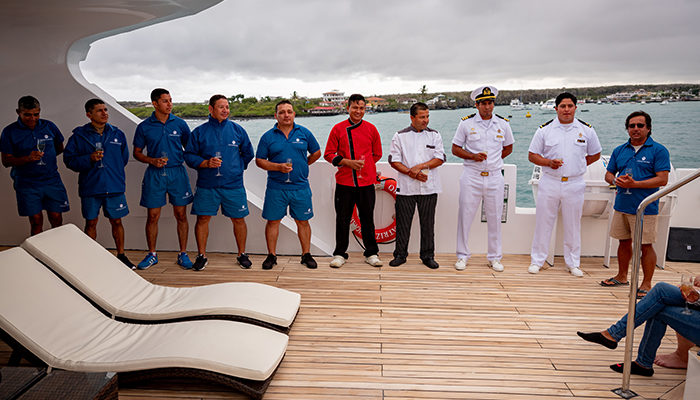 The captain and crew.

By midday we’re gathered on the top deck of the boat like guests of honour, champagne in hand, each crew member giving us a proper welcome. It’s the first time so far that I’ve seen everyone on the one floor, in the same place. Though we’re at full capacity, the amount of space to go around is surprising.

The jacuzzi beckons, but it’s time for lunch. With a feeling of only narrowly having earned it, our first repast unfolds with ceviche, white wine and elated chatter. The leisure to adventure ratio, at this early stage, is stacked toward the former, but the soft landing seems appreciated, even after a night in Quito’s plush Hotel le Parc. 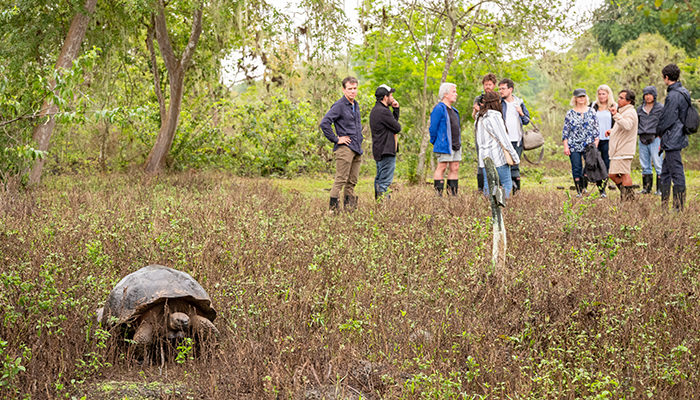 A giant tortoise in the Santa Cruz highlands.

Early afternoon we’re off again, walking the highlands of Isla Santa Cruz, land of the giant tortoises. I’m ready for a needle-in-a-haystack situation, the kind of thing you need expert local trackers for; I’m thinking of mountain gorillas in Rwanda, rhinos in Uganda. But the tortoises are everywhere. Debriefing over empanadas at the local bar, we exchange smiles and awkward Spanish with the ladies who serve them, still within tortoise-viewing distance. Dusk falls and we hit the road, back to the boat. 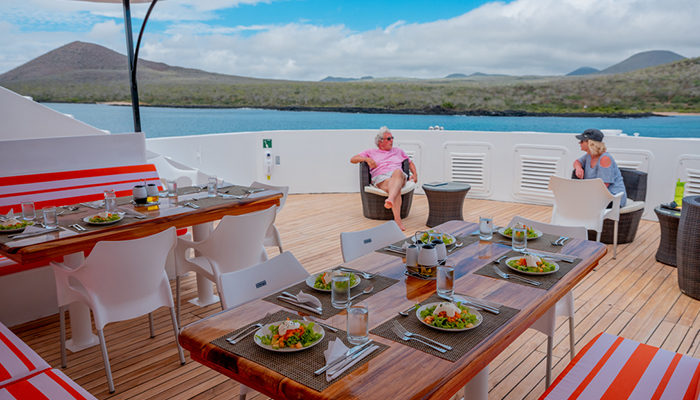 With hints of dinner (baked potatoes, fresh shrimp, mixed vegetables, seared tuna in sesame and soy) wafting to us on the first floor, we sit for an onboard briefing on the following day’s action. There will be snorkelling at Las Tintoreras, a must-see spot on Isla Isabela. We should expect some marine iguanas, sea lions, lava herons, perhaps some Galapagos sharks.

READ MORE: THE PERKS OF HAVING AN ONBOARD NATURALIST IN THE GALAPAGOS

Wine bottles are drained and the group disperses, some to bed, some to the top deck. I follow the latter. The weather’s still fit for t-shirts and shorts, so we retire to sun lounges under the stars. Jose saves me a trip downstairs by hand-delivering a second glass of Gran Duque de Alba, a Spanish brandy my former (and altogether more dull land-bound) self would never order. 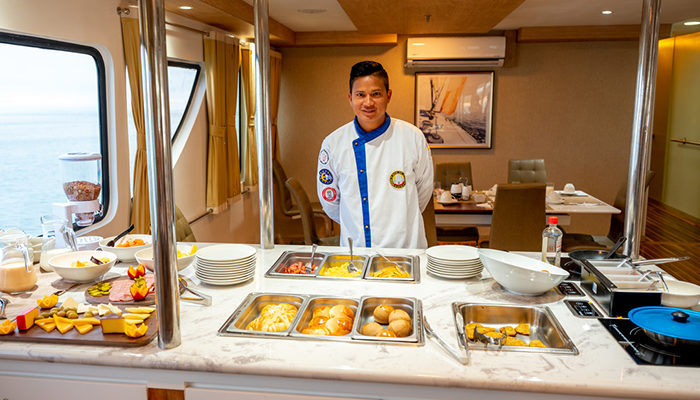 In the morning I’m the last one up, joining the others at the table. There are pastries, hash browns, orange juice, strong black coffee and eggs cooked to order. The pitch of conversation is a little faster and a little higher; yesterday’s small talk has become a colourful travel chronicle with many contributors, the ice well and truly broken.

EMBARK ON THE ULTIMATE GALAPAGOS JOURNEY WITH PEREGRINE

David, from New York, knows boats. He says what Mosquito says – that this is no ordinary boat. One of the crew, pointing out the window, comments on the difference between this boat and that boat over there. Namely that that one is merely a ‘floating box… a box with an engine.’ We all laugh. Only later will I will learn the extent of the crew’s pride in helping build, in scarcely eighteen months, the best boat of its kind in the Galapagos. Alexis tells me these guys are ‘the stars right now’. 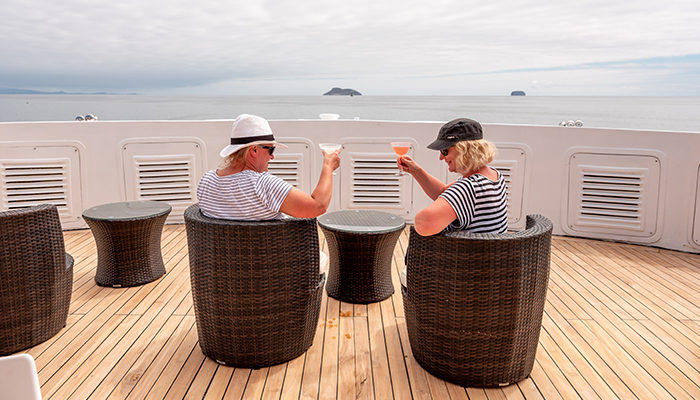 Our first snorkelling trip is a good one: a school of sharks, a few turtles, a ray or two, and a dancing sea lion caught for minutes on an underwater camera. We deploy in twos and threes, dodging coral reefs and alien fishes, returning with stories of sightings and adventures, dripping water and excitement into the speedboat. The giant tortoises we saw yesterday seem like they happened last week.

Back on board, we know the drill, or thought we did. Shoes and life jackets come off, excitement for hot showers escalates, and bang – Jose intercepts with margarita pizzas. For a moment it looks like David might kiss him. The hot mozzarella is a revelation – there’s nothing like a long swim to stoke the appetite. I may not be a boat person yet, but after four more days of this I could probably get the hang of it.

If your time has come to explore the archipelago, browse Peregrine’s boutique small-ship Galapagos cruises here.