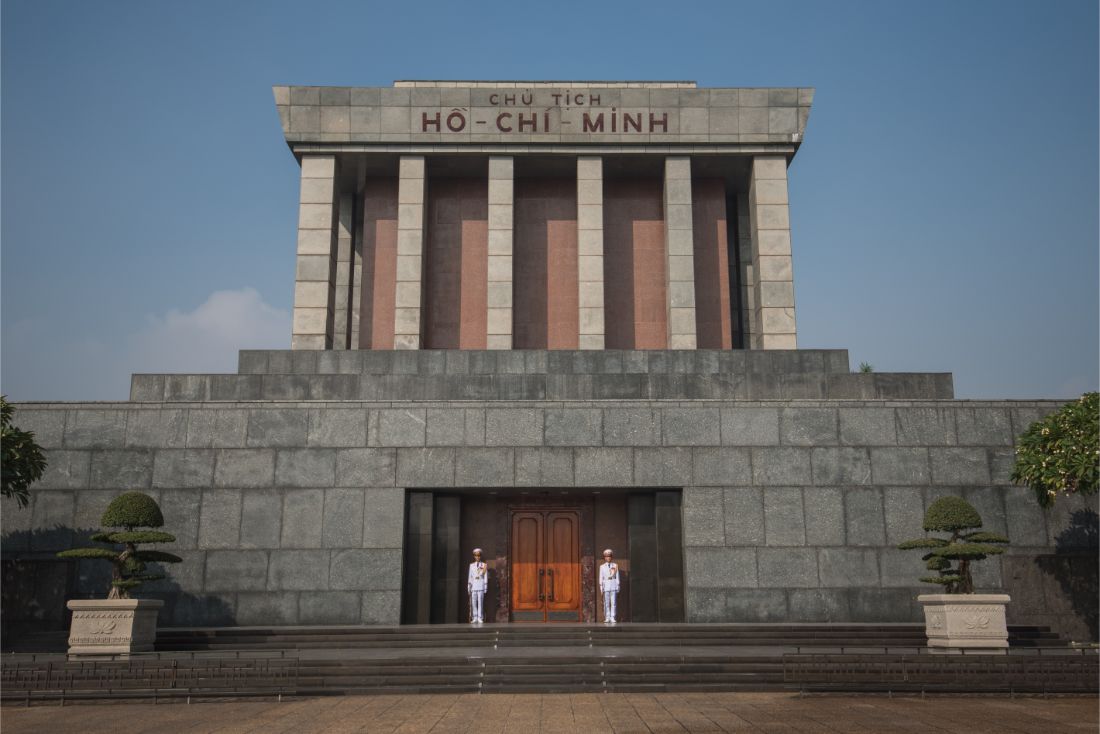 It’s hard to ignore the reminders of Vietnam’s troubled past, despite its reputation today as one of the friendliest countries in the world.

Forty years on, the American War (or Vietnam War) has left deep wounds across the country – and across borders and seas – and on the Vietnamese people yearning for lasting peace. A visit to one of the country’s many war memorials or historical sites is essential for any traveller looking to understand Vietnam’s modern identity.

Here are some of the most important places in Vietnam to learn about the conflict. 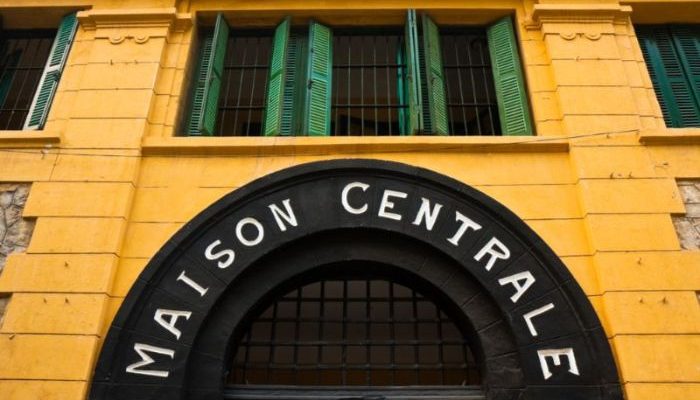 The entrance to the Hoa La Prison. Photo by Nickolay Stanev.

Hoa Lo Prison, which translates as “Hell’s hole” and dubbed the Hanoi Hilton by American pilots, was originally used by French colonists to hold Vietnamese prisoners campaigning for independence.  After 1954, a new wing was added to the prison – nicknamed Little Vegas – and was used to hold incoming American POWs (including US Senator John McCain). The prison was demolished in the 1990s, however the gatehouse has now been converted into a museum. Displays include recreations of interrogation rooms and sleeping quarters, photographs, and a guillotine.

EXPLORE OUR RANGE OF SMALL GROUP ADVENTURES IN VIETNAM NOW 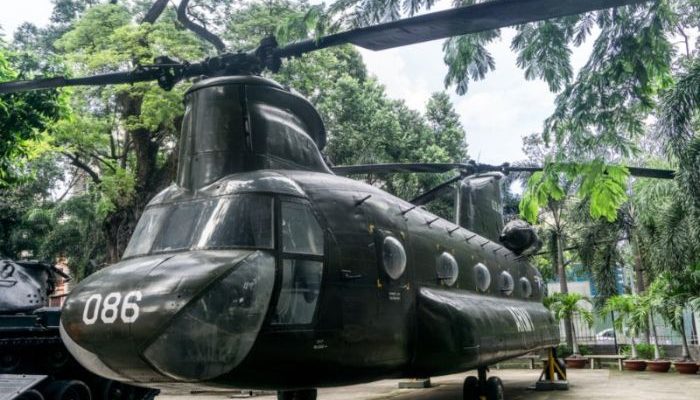 A chopper in the War Remnants Museum forecourt. Photo by Scott Biales DitchTheMap.

Located in Ho Chi Minh City, the War Remnants Museum holds a fascinating, and gut-wrenching, collection of relics from the war. The museum’s forecourt – containing a helicopter, two attack bomber planes, a tank, and a Daisy Cutter bomb – sets a sombre introduction for what’s to come; a series of themed rooms, filled with graphic photography, historical artefacts, and macabre dioramas. Visitors can see the cages in which the government held political prisoners, as well as a guillotine, which was used for executions. The photography exhibits are particularly confronting, particularly the series depicting the long-lasting impact Agent Orange, a herbicide weaponised by the USA during the war, has had on generations of Vietnamese.

RELATED: HOW TO SAFELY CROSS THE ROAD IN VIETNAM 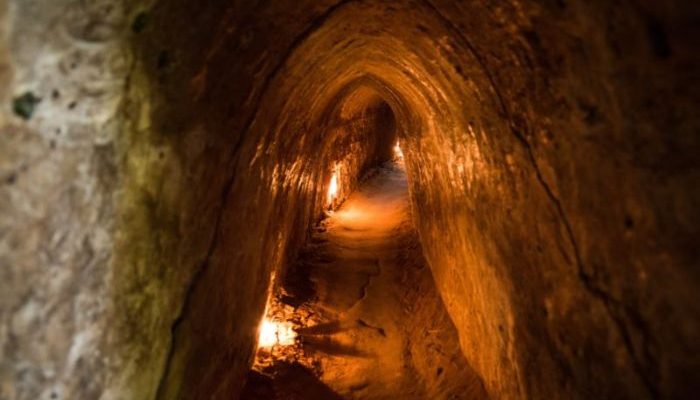 The claustrophobic tunnels at Cu Chi. Photo by daphnusia.

Found just outside Ho Chi Minh City, the Cu Chi Tunnels are definitely not recommended for anyone with claustrophobia. This sprawling network of tunnels – which connect to a larger web of underground paths stretching across much of Vietnam – was primarily used by Viet Cong soldiers, and was a base for the Tet Offensive in 1968. The tunnels are now a popular tourist destination, where visitors can crawl around parts of the system, and see how booby traps were cleverly planted in the jungle. Many of these tunnels have been widened to accommodate tourists but are still alarmingly narrow. Most visitors need to stoop down low, which only highlights just how confined Viet Cong soldiers were during the height of the war.

RELATED: WHAT TO EXPECT ON A HALONG BAY CRUISE

A visit to the Ho Chi Minh museum is a must while you’re in Hanoi. Ho Chi Minh is the face of independence in modern-day Vietnam, leading the country out from under French rule and forming a democratic republic. When the war ended, the city of Saigon was renamed after him. The museum is a great place to learn more about his life, travels through France, England and America, writing – including poetry he wrote while imprisoned by the Chinese government – and Soviet-era art. The charismatic leader died in 1969 but his body was embalmed and is now held in the imposing Ho Chi Minh mausoleum, just near the museum. You’ll need to make sure you have your shoulders and knees covered to enter. 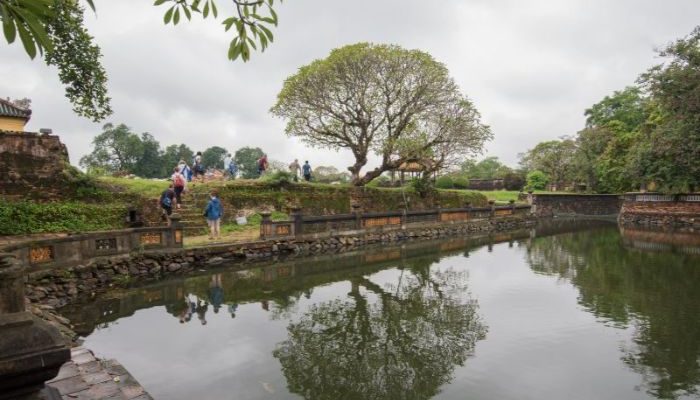 One of the tranquil pools at Hue’s Imperial City. Photo by Pat O’Neill.

With its sprawling courtyards, deep moats and intricate temples, Hue’s Imperial City is an easy place to spend hours exploring. But the former home to the Nyugen dynasty has had a tumultuous past. Hue was the capital of Vietnam until 1945, and in 1947, the Viet Minh – a national independence coalition led by Ho Chi Minh – took control of the citadel. The French moved in and a six-week battle took place, which saw the centre of the city, including the Imperial Palace, almost entirely destroyed. The city came under attack again in 1968, when Viet Cong soldiers and the People’s Army of Vietnam launched a coordinated strike, again taking control. Visitors to the citadel will see how extensive the damage has been, however the tombs, palaces and temples are slowly being restored to their (almost) former glory.

RELATED: WHY YOU SHOULD JOIN A LAUGHING YOGA SESSION IN HANOI

When you’re visiting war memorials and museums in Vietnam, remember to show sensitivity. Many lives were lost throughout the conflict, and while the younger generations tend not to talk much about it, you may meet soldiers (or their families) at some sites, particularly at the War Remnants Museum. It’s also important to dress appropriately.  Shoulders and knees must be covered, so avoid wearing singlets or shorts.

Explore Vietnam on a small group adventure with Peregrine. View our range of tours now.

A guide to portrait photography on the road, as told by an amateur with the skills of an expert