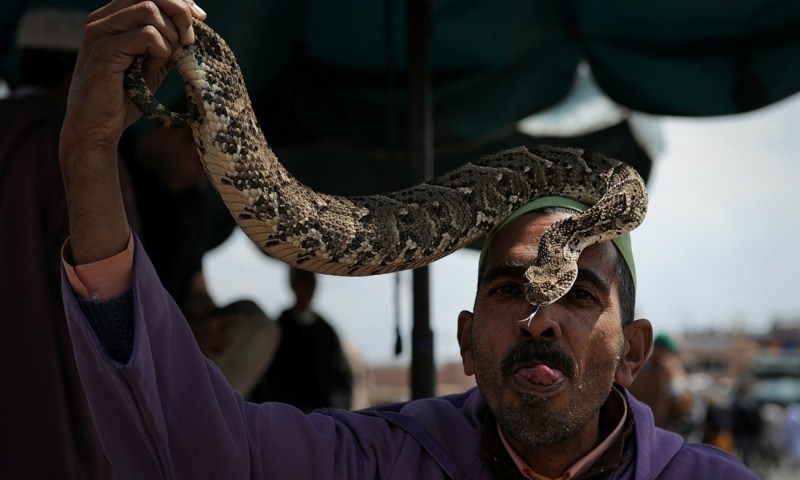 After almost a week in Morocco, I still hadn’t seen a snake in a basket. Along with mint tea, souks and tagines, snake charming was, to me, quintessentially Moroccan, and I was desperate to see a ‘performance’.

Let me preface this by saying that I am terrified of snakes. Why I wanted to see a venomous asp sway in time to an out-of-tune flute is something I will never know. I suppose it is something akin to leaping from aeroplanes when you’re afraid of heights or rubbernecking at accidents on the freeway – a morbid fascination. 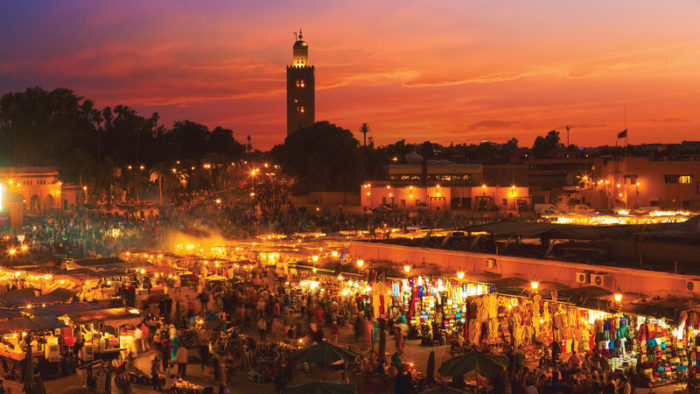 With origins in Ancient Egypt and India, snake charmers were once magicians or healers; they needed to know how to handle snakes correctly – possibly to remove them from the homes of frightened villagers – and how to cure a snake bite. Quite convenient, when you consider that most of them were on the receiving end of a bite or two – knowing how to stop the swift flow of venom through the body is a pretty good skill, really. Snake charming is the practice of ‘hypnotising’ the creature, luring them up into an erect pose, to the sound of music.

So off we went into Djemaa el-Fna, Marrakech’s humming central market. We strolled along the labyrinthine alleys, stalls stocked high with coloured tea glasses, leather goods and bells. No snakes. We ambled across the market square, past spice traders selling dune-like mounds of dried ginger, paprika, turmeric and cinnamon, and carts piled with dried apricots and prunes. No snakes.

Further along we tried to resist the advances of a henna-wielding ‘artist’, and failed miserably – despite my aversion to henna tattoos, somehow I ended up with curly drawings over my hands, feet and up the sides of my legs. As the amorous tattooist continued to doodle on whatever flesh she could get her brush on, still, I spied no snakes. Things were beginning to look dire. 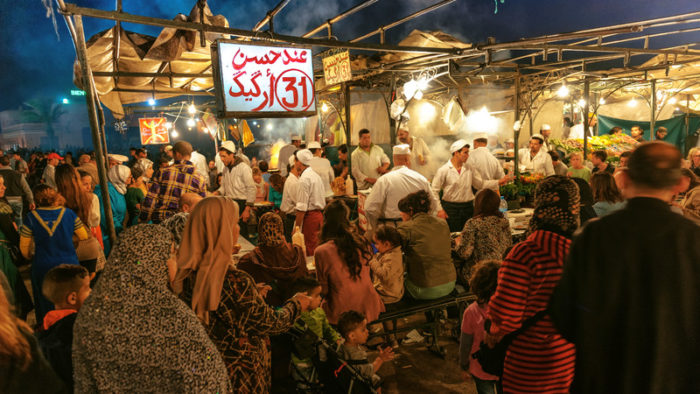 Until. Across the square came the tinny sounds of a flute. Following the tunes, with a sudden reluctance in my step, we found them. I scrambled for my camera, keeping what I thought was a safe distance from the four men sitting on a carpet, surrounded by oily-looking rags and a languid hooded cobra. A black one. Just lying there, less then two metres from where I stood. I had expected all the snakes to be contained in baskets, standing up only when they heard their favourite melodies.

Modern-day snake charmers are canny businessmen. As soon as they saw me pull my camera from my bag, two men rushed towards me, with not one, not two, but four slender serpents in their hands, holding them out as though they were feather boas, ready to drape around my neck. And drape them they did, despite my terrified cries of “No, no, I just want to take a picture”. It’s obvious in hindsight: you can’t stand at a safe distance and take a few happy snaps of a spectacle like this. You are expected to be part of it. It’s all part of the show.

One ‘charmer’ took my camera and snapped a couple of pictures while I held the snake-scarves as far away from my face as possible. Afterwards, the men pressed the head of one snake against my forehead, and made me kiss it ‘for luck’. Armed with photos and enough terrifying memories to last a lifetime, we left, ticking “see snake charmers in a Moroccan marketplace” off our list. 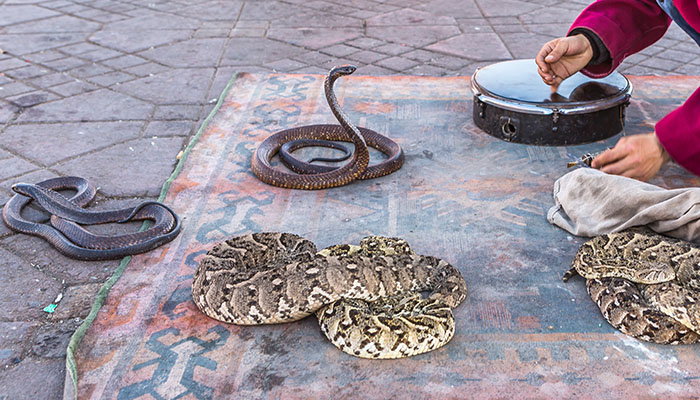 I wish I’d done more research into the practice of snake charming before we embarked on this particular trip. Magical origins aside, the act is a cruel, money-making spin. When the snakes rise up to the tune of a flute, it has nothing to do with ‘being charmed’; their owners starve the creatures, feeding them only when they emerge from the basket, so that they associate the noodly music with food. The snakes stand upright before their ‘charmer’ because they’re actually feeling threatened, and are poised to attack. Most snake charmers needn’t worry about being bitten though; the majority of snakes you see in Morocco (and India and Sri Lanka) have had their fangs removed and, in some cases, their mouths sewn shut. A small gap is left for their forked tongue to flick out and to allow for small amounts of liquid to be imbibed, but the snake will only survive like this for a few weeks.

To date, there doesn’t appear to be a peak body within Morocco to ban the practice. Snake charming was banned in India in the 1970s, however it’s still prevalent in rural communities. The ban has stripped many Indians – mostly from Bengal’s Bedia community – of their income, with many forming a union in revolt (of all the industries to form a rebellion, surely a revolt of snake charmers is the most terrifying). To avoid encouraging the practice, steer well clear of them, and never hand over money.

At the time, I thought it was a good story to bring home – “… and then I screamed and he put a snake around my neck and made me kiss its head, but then I realised that they’re actually just beautiful misunderstood creatures…” – along with some pretty funny photographs. But really? Snakes have no place in ‘entertainment’. They belong nestled under a log, camouflaged in a pile of leaves or stretched out on a rock in the sun; not in a bustling marketplace, being thrust upon anyone with a camera.

For a taste of real Morocco, check out Peregrine’s small group adventures here.