Traveller stories: Face to face with a polar bear 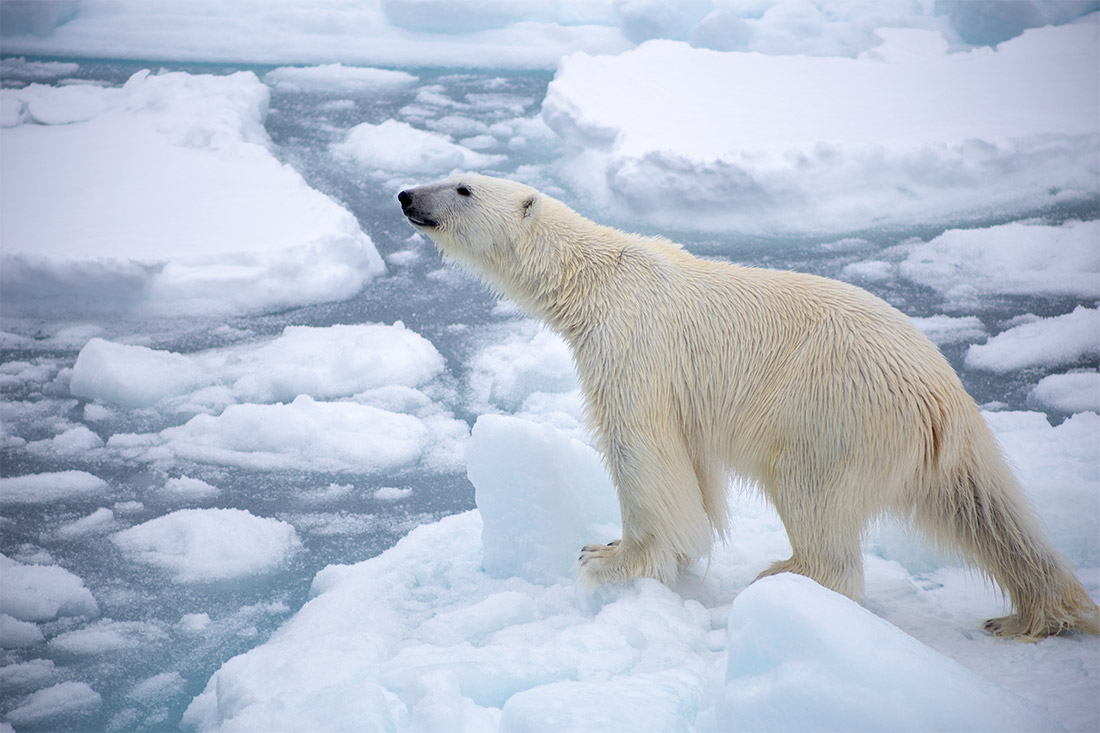 It takes a moment before I can make sense of the sprawling shapes of red projected in front of me. The mottled mess of blue, red and purple colours seem to shift in my head and then it clicks – I’m looking at a giant ice map of Svalbard, the frozen archipelago off the northern coast of Norway.

Our expedition leader, Michael ‘Woodsy’ Woods, strides across the screen with the commanding stage presence you’d expect from a former attorney turned Arctic expedition leader. Fresh from his watch above deck, the cold makes his round face as red as the screen behind him.

‘This chart here shows us where we can find sea ice,’ Woodsy explained. ‘With the brighter red areas indicating lots of sea ice, fading down from purple to blue where there is very little or no sea ice. Of course, where we find sea ice, we also find bears.’

To our expedition team huddled in the lounge room, steaming cups of tea in hand, our course for the next few days became clear. We needed to cut a path north-west through the Arctic Ocean towards Greenland, where a thick red belt of ice protruded south from the North Pole.

It was now the second day of our Introduction to Spitsbergen adventure and, while we’d seen plenty of reindeer, Arctic foxes, puffins and even a seal, we were yet to encounter the apex predator of this icy world.

Unlike other land-based bears, polar bears live almost exclusively on the drifting sea ice and only return to land when it’s time to burrow dens for their cubs. Because their habitat is determined by ocean currents and the formation of sea ice, the movement patterns of polar bears is vast and unpredictable. Over the course of a year, a single polar bear could venture as far west as Nunavut in Arctic Canada to as far east as northern Russia. With a huge swathe of territory to cover, our best chance of finding one was to follow the ice. 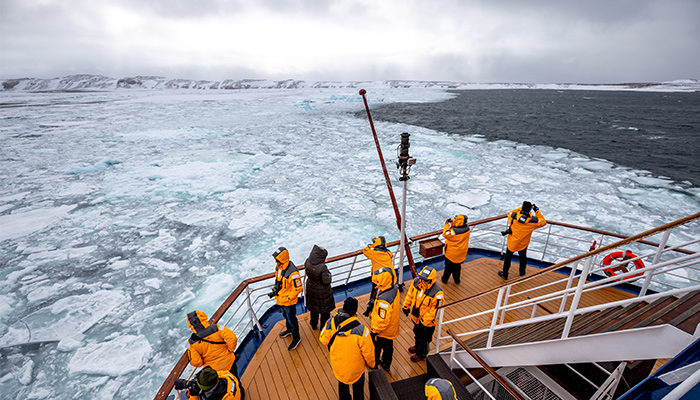 On the look out for wildlife from the rear of the ship. Photo by Justin Meneguzzi

The next morning I emerge, bleary eyed, onto the bridge holding a mug of watery coffee. The intense round-the-clock daylight of the Arctic summer means the golden hour between dawn and day didn’t exist. It was all bright, all the time. Where yesterday there was only endless black water, there was now a field of fractured sea ice stretching to the horizon. A team of spotters stood on watch with binoculars, intently looking for tell-tale signs of cream in a blue landscape.

The odds were looking good, but the mood onboard was tense. Slowly the morning hours slipped by, and we patiently waited while the ship trawled along the edge of the sea ice.

Like many things, when the moment finally arrived it was at the most inconvenient time. The voice of Anne, our onboard marine biologist, crackled across the PA system as we were all settling down for lunch: ‘We have a polar bear approaching the ship’. It took half a beat for the news to register, then all at once everyone rose from their seat in a flurry of whipping jackets to get a spot on the bow.

Pounding heart in my throat, I raced up the stairs two at a time with my camera clutched to my chest, and burst onto the deck to find every soul onboard (even the chefs) braced against the railing. At first I thought it was a joke. There was nothing. But those with high-grade telescopic lenses could see the bear, and he was moving. I don’t know whether he was just very inquisitive, or perhaps lured by the lunches that sat uneaten below deck, but he was making a quick dash in our direction. 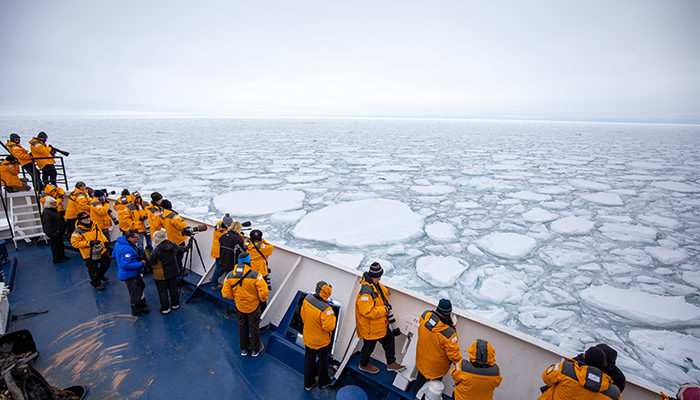 Hundreds of lenses were trained on the creature as he arrived. The silence was almost reverent, broken only by the occasional click of a shutter. Nobody wanted to make a noise for fear of scaring off the bear, causing him to run the other way or dive beneath the ice. Someone dropped their tripod, creating a deep echoing clang. The bear looked up to identify the sound, followed by the cicada of a hundred shutters clicking in unison.

Quickly the bear darted beneath the bow of the ship, out of view of those higher on the bridge, but directly under my perch on the starboard side. Stooping to one knee, I watched through a porthole as he poked at the base ship, a mere few feet from me. Suddenly, he looked up. In that moment, face to face with the largest marine mammal in the world, it felt like there was a thread between us. I could see the white of his great brown eyes and I saw in them a childlike curiosity a world away from the ferociousness I had expected from Attenborough documentaries. I only wonder what he saw looking back. We must have been an odd thing to him, a collection of strange smells and sounds he’d never seen before.

“I took this shot the moment our eyes connected through the lens.” – Justin Meneguzzi.

The moment was broken when a barrel-chested man with a broad East Coast accent went to make a wisecrack – ‘Any closer and he may as well come…’ – but was met with a sharp chorus of shushes reminding him to be silent.

On the move again, the bear traced a path down the port side of the boat with a parade of photographers following from above as he sniffed and padded his way to the stern. He continued moving south, into the distance, and once again out of range of our cameras. As respectful observers in this white wilderness we did not pursue the animal, but by now we’d spent almost two hours standing in the freezing cold. Despite the chill we were all riding a euphoric high. Later in the lounge while drinking wine and eating canapés, everyone is huddled in groups comparing their favourite shots like school children swapping baseball cards,

The best bit is that everyone, whether it was on a phone or a professional grade camera, got a great photo. But for me, making a connection with this creature in his natural surrounds without glass or bars between us, is something I’ll take with me forever.

Discover your own wildlife encounter on one of our polar expeditions.