The beauty of travelling to Uzbekistan, even though I knew nothing about it

This article first appeared on The Journal and has been republished with permission.

It was raining lightly as we taxied along the runway at Tashkent airport. It was early evening; the sky was grey and drizzly and the buildings lining the tarmac were large and imposing. ‘Aha,’ I thought. ‘This is exactly what I thought Uzbekistan would be like. Bleak and grey.’

It’s ironic really, because aside from the fact Uzbekistan used to be part of the Soviet Union and neighbours Kazakhstan (the home of a certain infamous fictional television reporter), I knew nothing about the country before arriving. I shouldn’t have formulated any ideas or expectations about exactly what Uzbekistan would be like, because I had nothing to base it on.

Perhaps it was the Soviet history that conjured up images of austere buildings, bleak landscapes and a closed-off culture – honestly, I’m not sure. But I can tell you that after spending over a week exploring this Central Asian country, I couldn’t have been more wrong.

We spent time exploring Bukhara, a UNESCO-listed city that served as the capital of Uzbekistan back during the 16th century. A major trading point for silks and crafts along the Silk Road, I pictured a small town of old brick marketplaces, no longer in use. But, the wealth the Silk Road generated all those centuries ago means the city is a maze of colourful classical buildings, including spectacular madrasas and mosques adorned with intricately decorated domes and archways. 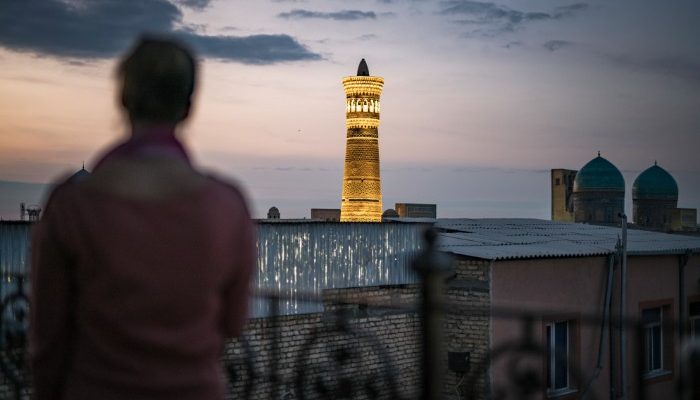 The Kalon Minaret in Bukhara

As we wandered toward the 15th century Kalon Mosque and Minaret, the sun broke through the clouds, casting the elegant, turquoise domes into a haze of glitter. Only moments ago, the sky was overcast, so the brilliant blue and setting sun provided a truly stunning backdrop for this beautifully decorated masterpiece. I remember thinking I had rarely seen a building as striking as this. Imposing due to its size, yes, but you felt drawn to it, humbled to stand in front of it, rather than dwarfed by it. My expectations about the way Uzbekistan would look were well and truly proven wrong.

READ MORE: 4 REASONS WHY NOW’S THE TIME TO VISIT UZBEKISTAN

As we journeyed through the mostly flat Uzbek landscape, passing through small villages of textiles workshops, farms and local restaurants I started to learn more about the complex history of Uzbekistan from our local leader, Zafar.

“My very good friend, said Zafar earnestly as we drove through the countryside towards Gidjuvan, “Uzbekistan has a very complicated history with a mix of many, many different cultures and religions. There are cultural Uzbeks, cultural Kazakhs, cultural Tajiks and Russians, we have Muslims, Christians and Jews and some people who are not religious. That’s why you could meet Kazakh or Tajik people across the country, even though we are in Uzbekistan.”

Some local potters in Gidjuvan.

The mix of ethnicities is because this land, now known as Uzbekistan, has been invaded so many times over the centuries due to its strategic location as part of the Silk Road trade route between the East and West. The introduction of Islam in the 8th century saw many Arabic groups immigrate into the area, before Genghis Khan and his Mongol army arrived in the 13th century. Over the next few centuries there were numerous smaller invasions, until the significant Russian takeover in the late 19th century. All of these events have led to the culturally and ethnically diverse population of modern-day Uzbekistan.

Coming from a western country, where the media is currently peppered with stories about “violent, refugee gangs” who are overtaking our suburbs, or walls being built between countries to keep immigrants out, I struggled to understand how such a diverse group of people could live together so comfortably. With a population of nearly 33 million people all living in a country 17 times smaller than Australia, it was a heart-warming but somewhat overwhelming concept.

”How does that work, Zafar?“ I asked. ”It seems so peaceful here, but how does everyone get along when they have such different cultures and beliefs?”

Zafar answered me seriously, without hesitation. “In Uzbekistan, as long as you’re a good person, with a good heart, you are welcome in this country.”

The idea that everyone is welcome in Uzbekistan was proven time and time again throughout the rest of our trip. 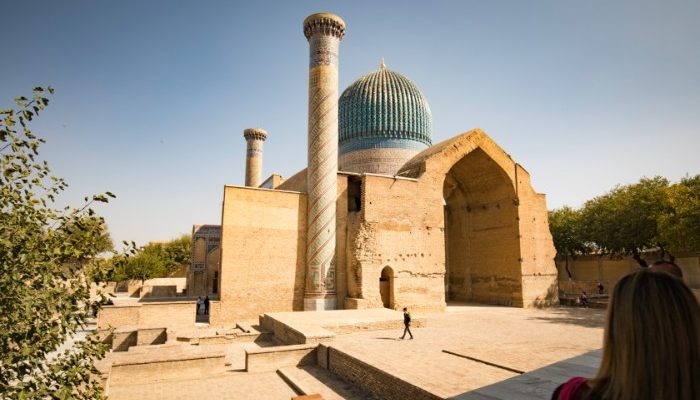 In Samarkand, a touristy city by Uzbekistan’s standards, you won’t find yourself being hassled incessantly by vendors as you walk the charming stone streets or wander through the teeming bazaars. I found it to be a friendly, relaxed and welcoming country – the people are curious and kind, generous with both their time and their smiles.

These were just a few of the things I learned about Uzbekistan. I knew basically no one who had travelled there before me and had subconsciously fallen victim to the idea that all the ‘Stans’ were the same – possibly dangerous, former-Soviet territories. This country I previously knew so little about, taught me so much about the assumptions I form about places I have never seen.

Having squinted through the sunshine at the turquoise domes in Registan Square, gazed up at the glowing minaret in Bukhara, or passed through the elaborately decorated metro stations in Tashkent, I can confirm that Uzbekistan is anything but bleak and grey. It’s mesmerising.

Visit Uzbekistan on a small group tour with Peregrine and you’ll see all the highlights (as well as some jewels you’d never find on your own).

All images by Liam Neal.