The spirit of adventure: how travel has changed for the Baby Boomer generation

We’re old enough to have made a boatload of wacky decisions in our lives. Happily, two of those involved stepping away from our daily routines into the wide world of travel.

We were in our 20s in the late 1970s and enjoying our September honeymoon on the north shore of Lake Superior. Under brilliant yellow leaves, we decided to quit our jobs and leave the country. That led to a three-month stint in London, and over a year living in Spain. Fast forward to 2010. After raising two kids and running a business for three decades, we decided to sell our house and most everything in it, pack our bags, and leave for an indefinite period. That was six years and 59 countries ago. 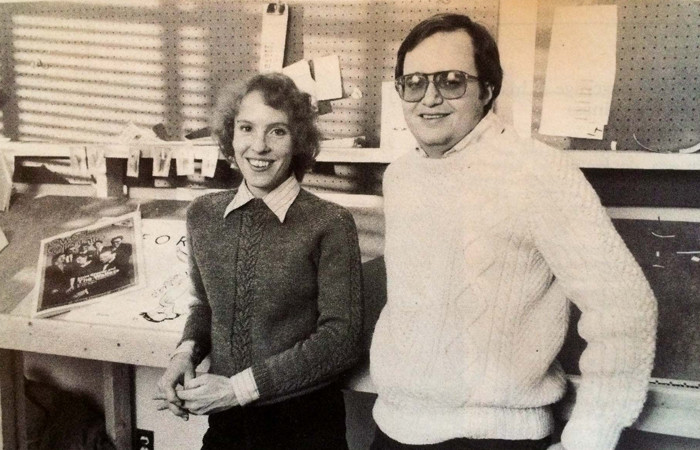 So, what’s the difference in travel then and now? As recently as the 1970s, cigarette smokers puffed away on airplanes, an international phone call from Spain required walking to the telephone company building, and cars were not yet subject to safety regulations. (Think of the French Citroën 2CV, or “Deux Chevaux” model, barely more than a souped up tin can.)

Sure, these days sites are crowded with tourists, and selfie sticks must be endured. But travel, for the most part, just keeps getting easier.

The world is much more accessible now than it was in the 70s. With the exception of a few war-torn countries and politically unfriendly places, we’re not only able to go where we want, but we’re likely to find a tourist office prepared to help us. In the 70s, we watched the U.S. retreat from Vietnam on television. Now we take cooking classes in Hoi An. Under the Soviet Union, Eastern Europe was devoid of tourism. Now Estonia, Latvia, Lithuania, and Romania are wide open and lovely to visit.

Kris and Tom in Spain’s Basque Country in 1978.

How we get around

When we were younger and poorer, we hitchhiked around Europe. We don’t need to do that anymore. No longer do we need to endure the 24-hour train ride on hard wooden seats from Barcelona to Sevilla. We don’t have to retreat to the corridor while gypsies clapped incessant rhythms and mothers dozed on bags of fresh-picked onions. Today’s AVE high speed train from Barcelona to Seville (via Madrid) takes just over five hours. We love Eurail passes more than ever, and for the same reasons as when we were young: the convenience of arriving in city centres, frequent departures, and the fun of it.

We’re huge fans of public transit–not the touristy Big Red Bus city tour, but the regular bus routes, trams, and subways that locals use. That’s the way to see a place, just as it always has been. And we’re old enough (by far) to rent a car. We’ve driven in dozens of countries.

No more hefty guidebooks and duo language dictionaries. Now we carry our smart phones loaded with apps. No more film. We carry digital cameras and make hundreds of exposures a day. No more giant suitcases or backpacks. Lightweight clothing and featherweight luggage help us stay mobile. No more travellers’ checks and trips to American Express offices. ATMs are everywhere. No more visits to the post office with our smudged aerograms because we can just reach into our pocket and text with our kids instantly. These days, we don’t even stop to reload SIM cards for our phones. The whole world is on one plan with unlimited data. (Thanks T-Mobile!)

But perceptions remain that older travellers should stick to all-inclusive resorts, cruise ships, and well-planned tours with medical assistance nearby. Maybe that’s a good place to start for someone who’s never traveled and is afraid to begin now. For those of us who roamed around independently at a younger age, we’ll never enjoy standing in line to chow down at the buffet, nor take an interest in a two-hour ship leave to browse the trinkets in foreign-owned shops.

Fortunately, now that we’ve grown up, the travel industry has, too. Adventure travel is growing fast, and it’s not just built for reckless young ones. Our generation wants active travel, too. Even “soft adventure”–like hiking, biking, snorkelling, or kayaking–offers closer views, more intimate contact, and a healthier outcome than the old style walking tours. Most of our adventurous travel highlights–such as hiking Patagonia, Guatemala, Tasmania, and Spain’s Camino de Santiago, and even learning to   surf and scuba dive–have come about in the last decade. 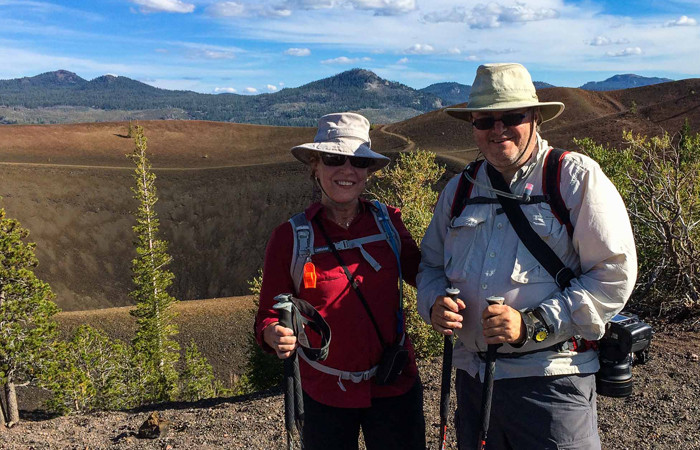 Hiking in Lassen Natl Park in 2015

Educational experiences are more personalised than they used to be. Although we’ve always been averse to group tours, we’ll happily invest in an expert docent to uncover Venice, or take the time to listen to the park ranger’s detailed story about the battle of Little Big Horn.

We splurge here and there compared to when we were young. We treat ourselves to a taxi if we’re worn out, or indulge in a special meal at a local restaurant. Wine? Yes, as long as it’s what the locals drink. Those student discounts we used to use? They’re now called senior discounts, and you won’t find us turning them down.

What may not be obvious is that this stage of our lives is pretty similar to life in our 20s. We aren’t in charge of anyone besides ourselves. We don’t have to tell anyone where we are, and we can start each day with no other plan than to see what we see. That’s a good way to travel, no matter what age.

Kristin Henning and her husband Tom Bartel are the former publishers of City Pages, Minnesota Parent Magazine and The Rake Magazine, all in Minneapolis/St.Paul. Since 2010, she and Tom have been on the road, traveling across five continents and blogging about their traveling life at Travel Past 50. Follow them on Facebook, Twitter, Instagram or Pinterest at @travelpast50.