Traveller stories: What it’s like to experience Cambodia on a small group tour 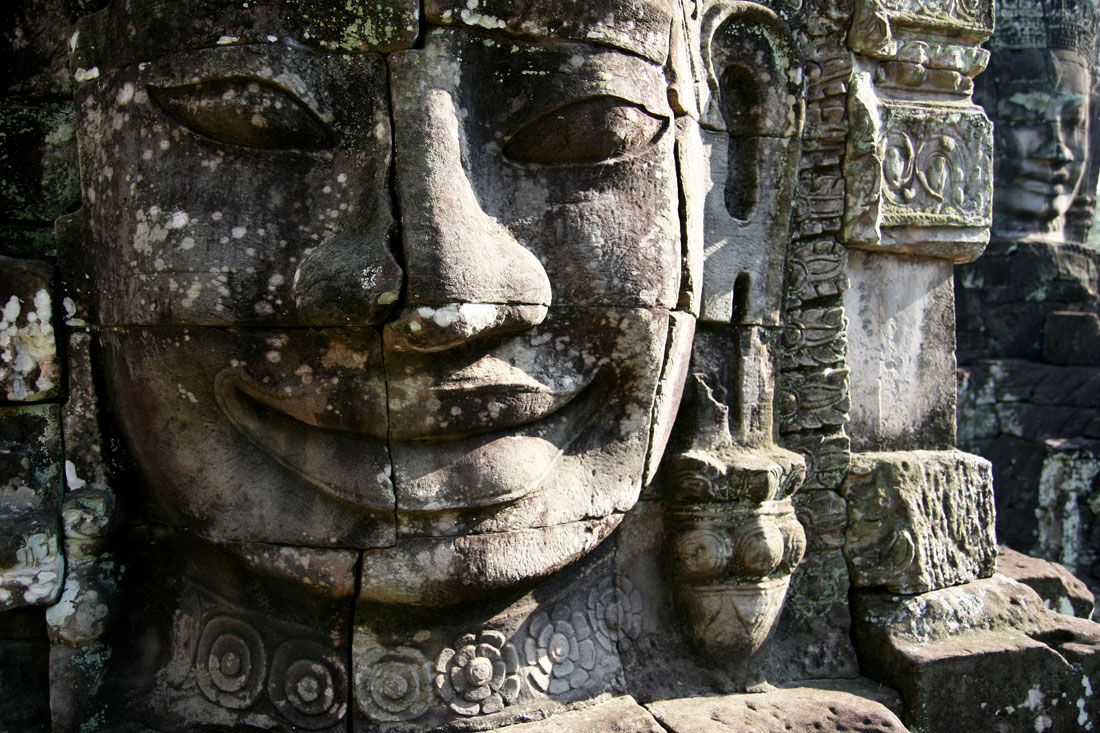 Cambodia may not have Vietnam’s foodie reputation or Thailand’s famous beaches, but visitors are often blown away by the country’s natural beauty and the warmth of its local people, despite the tragedy of their recent history. Outside of buzzy Phnom Penh and Siem Reap, life rolls by slowly. Children wave from wobbly bicycles and saffron-robed monks offer morning alms. For most travellers, it’s another world.

First-time visitor Filippos Venetopoulos talks us through his experience on Peregrine’s six-day Cambodia Discovery tour, which takes in everything from rural farming villages to the famous temples of Angkor and the infamous Killing Fields of Choeung Ek.

What were your first impressions of Cambodia?

This was my first time in Cambodia (and my first Peregrine experience), so I didn’t know what to expect. Flying into Phnom Penh, all I could see were bikes and motorcycles everywhere. I thought I was going to have to push my luggage around or something, but thankfully there was an air-conditioned car waiting for me when I arrived at the airport.

I got a feel for the city immediately. The weather was dry and hot. There were so many bikes and tuk tuks around, and no one paid attention to the traffic lights! I was amazed to see so many shops selling car equipment and tires, but the only cars I saw on the road were Range Rovers and upmarket brands.

The accommodation was amazing – a beautiful boutique hotel in the city centre with easy access to the local markets and shops. Our local guide welcomed us at 6pm and we had a briefing about safety and the trip itinerary, and met the rest of the group.

Tell us about your local guide.

Our local guide’s name was Eng Seckchanvantha, but the short version was Vantha. He was very energetic, engaging and knowledgeable about Cambodia – the history, the food – and he just really wanted us to have a good time. He understood the dynamics of the group so well! 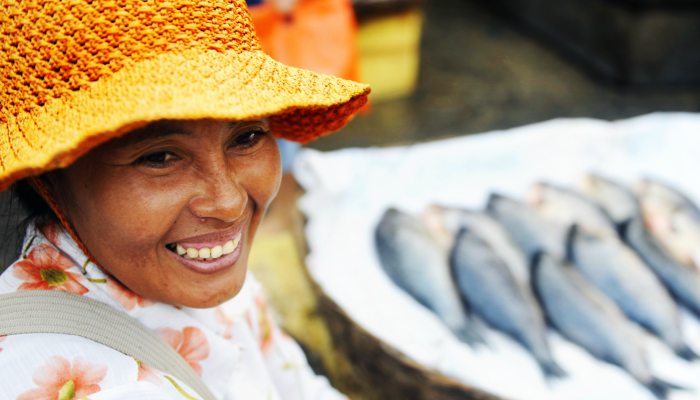 The food was excellent. Vantha showed us secluded restaurants you wouldn’t have known were there; he had very good taste. In Cambodia they eat a lot of rice, curry, fish and lemongrass. We tried lok lak [a traditional dish of beef stir fry with tomato, cucumber and onion]. Some of the food was a lot spicier than I had hoped!

The other great experience we had was when we went to visit a local family in Siem Reap. They cooked us a dish with peppers, dragonfruit and passionfruit – a salty, sweet mix of vegetables, fruit and chips. It was really different.

What did it feel like to visit the Killing Fields?

Thinking about it now, I get goosebumps. It was a very intense experience, but I think it’s good to understand the local history and to remind yourself what humans are capable of doing to other humans. 1.5 million people died under Pol Pot’s regime in the 1970s. Most Cambodian people you meet will have lost someone in their family during that time. It’s still very close to them.

Some members of our group couldn’t believe people could have done these things, but our guide turned to us and said, “In some part of the world, it’s still happening now.” He said if we wanted to stop at any stage, we could. But everyone in my group wanted to see, and we had some very constructive discussions about what we have to learn, where we stand today and how we can make tomorrow better.

Tell us about Angkor Wat and the temples of Siem Reap. 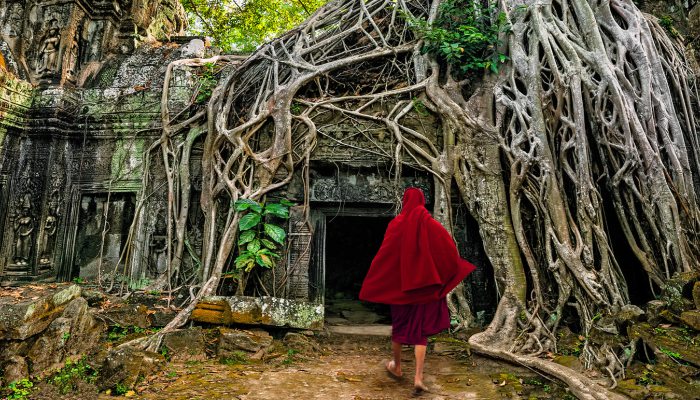 Angkor Wat was a huge highlight. You hear that it’s the biggest religious structure in the world, but until you see it with your own eyes, you just can’t understand the immense scale of it. What was particularly amazing about that day was that we started very early on, at 4.30am. We had some fantastic breakfast baskets at the hotel and were at Angkor Wat by around 5.15am, when it was still dark. We watched the sky behind the temples change from black to orange to pink to blue.

We spent the day with a local guide who was born and raised in Siem Reap, and saw three or four different temples. At the Ta Prohm temple, enormous trees grew through the building. It was spectacular. Imagine tree roots going through your kitchen and your house! The locals really want to preserve and keep that; they consider it a part of the growth of the world. There were also lots of monkeys running around, climbing all over the temples. If you’re holding a banana or sandwich – watch out! You may need to eat it fast.

We also met a local monk who put a ribbon around our hands and blessed us through prayer. We were able to ask him questions about his life (his English was good); in Cambodia, a man can choose to become a monk at nearly any stage in his life. Women are not allowed to touch skin with the monks, however; it is considered bad luck.

It was a combination of the educational and cultural parts of the trip, but mostly, it was meeting the local people. Despite their recent history, they are so friendly and open. Even if they don’t speak English, they’ll look at you and smile. You learn to communicate through body language.

Do you have any tips for people travelling to Cambodia? 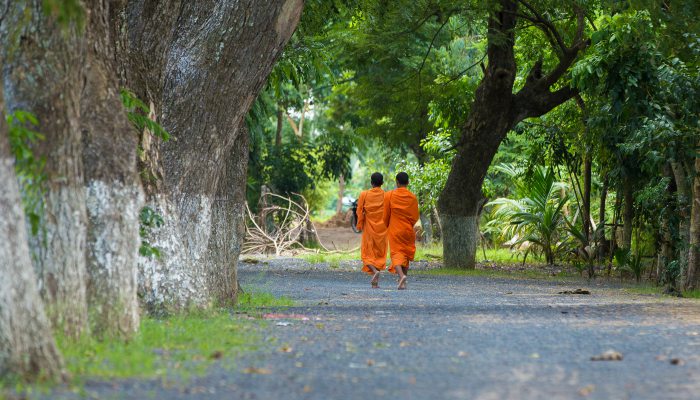 Definitely use mosquito repellent, sunscreen and a hat. Moneywise, tourists use US dollars; I didn’t even see the local currency. You don’t need much as it’s pretty cheap: around $2 for a tuk tuk, $6-7 to have a great meal, and a beer is just $1-2.

Also, I recommend a Khmer massage. They don’t use oil; they just use their strength. They stretch you and pull you in all sorts of directions, so it’s pretty strong, but once you’re done you feel completely relaxed. You can get a massage in your hotel or on the city streets for around US$15.

Experience the country for yourself on Peregrine’s 6-day Cambodia Discovery tour.