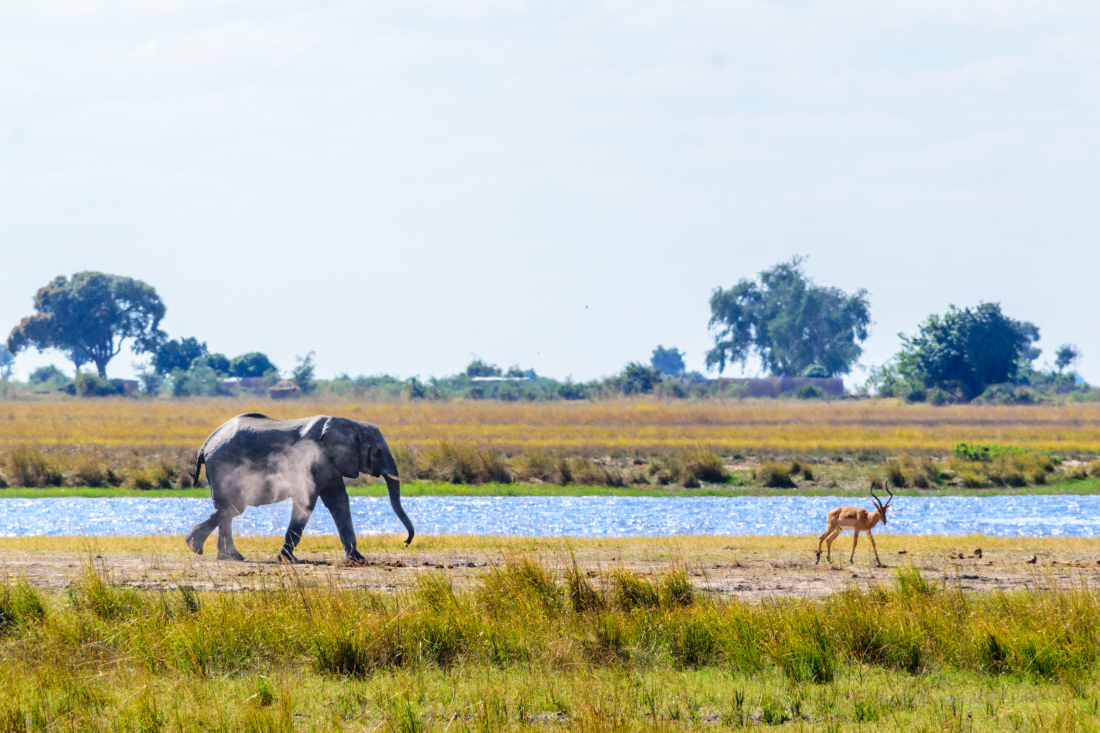 The Okavango Delta is a colossal wetland in Northern Botswana. The river here doesn’t flow into the ocean but instead floods the Kalahari Desert creating a vast sanctuary teeming with diverse wildlife. The delta’s ecosystem is unique and largely untouched by humans; a rare example of a still completely wild Africa.

The journey to our campsite was taken by mokoro, a dugout canoe traditionally made from sausage trees, or Kigelia, named after their sausage-shaped fruit. A team of expert polers were our guides, deftly navigating the delta’s intricate waterways on boats laden with camping equipment, food and litre upon litre of drinking water. The mokoros sink close to the surface; for a long time, all I saw were reeds and the placid river ahead, the 45-degree heat offset by a cool breeze and the proximity of the water below.

The three-hour trip was punctuated by pauses, when our guide stopped his mokoro to admire what would become our constant neighbours on the delta: elephants, using the canals to cool themselves in the sweltering temperatures.

When I call our camp a bush camp, I mean it was actually a series of connected shady clearings made by elephants underneath tight knots of trees; a series of branch-broken rooms and tunnels with space for a campfire and a path to the river and canoes. 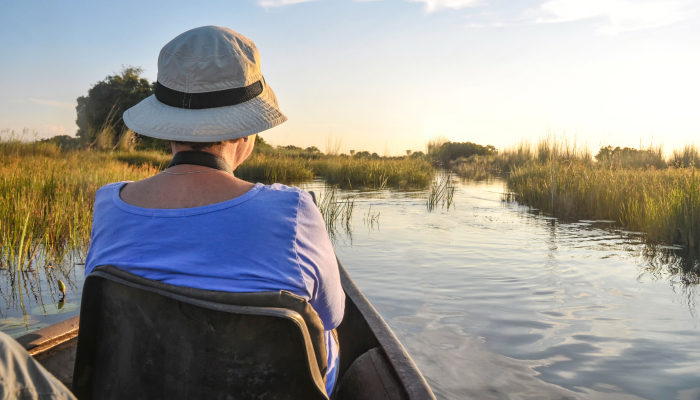 It was as I was sitting in a beached canoe and enjoying a rare cup of tea in the early cool of morning that the wildness of the Okavango Delta became very real. Branches cracked behind me and I turned to see the long grey trunk of a female elephant uncurling into the trees, expertly plucking the leaves away just metres from our little camp. The wilderness was no longer a spectacle observed from a distance, it was a domain I had intruded upon. I sat in peaceful silence, sipping my tea whilst the elephant enjoyed her own breakfast.

RELATED: WHAT TO EXPECT FROM A HOUSEBOAT TRIP ON THE OKAVANGO DELTA

The first night in the camp was unforgettable. My girlfriend and I both live in the city; we’re used to brick walls and the occasional police siren. We barely slept as a fierce wind howled through the tents and hyenas whooped eerily nearby. I’m ashamed to say that when a gust whipped open our tent door I couldn’t muster the courage to get up and fasten it properly, my mind full of imagined big cats prowling in the gloom. After all, we had been warned to go to the toilet in pairs and to watch out for the reflected glow of eyes in torchlight. Emerging in the next day I expected everyone else to have had a similarly sleepless night, but our mostly Australian campmates emerged bright-eyed and well rested.

Each day we departed on a meandering walk just after sunrise to catch sight of a varied cacophony of wildlife. We spent a few hours wandering before the scorching sun forced us into the refreshing waters. Our group had barely departed on that first day when the big cats I’d imagined the previous night turned out to be firmly grounded in reality: fresh lion prints sunken into the dirt not far from our camp.

SUBSCRIBE TO OUR NEWSLETTER FOR ALL THE LATEST NEWS, OFFERS AND GIVEAWAYS 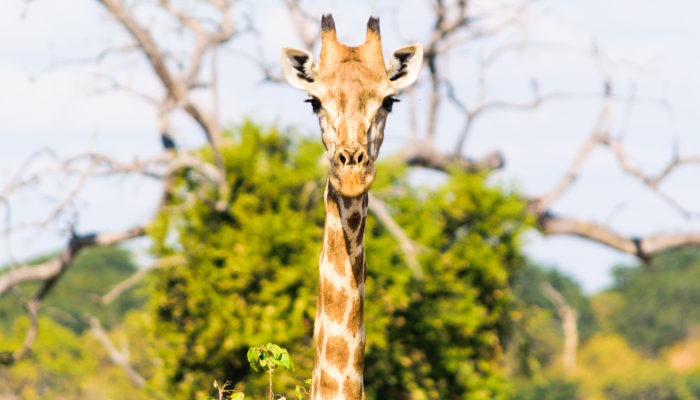 Boots met earth and dust caked our skin as we explored. Herds of zebra and wildebeest were common. The patched necks of giraffes swayed like wind-blown palm trees across the horizon. Elephants, in matriarch-led groups or as solitary bulls, marched across the grasslands to bathe. Hippos we would see later, stationed further upstream.

Our guide on these walks was a young Motswana who called himself Costa Rica. He wore a leather hat with a feather, a slayer t-shirt, tight jeans and ankle-high boots. Costa Rica was one of many strong characters amongst our group’s guides. Another earned the nickname Hippo when, after trying on goggles for the first time, discovered a proclivity for scaring us tourists by appearing suddenly from the water, erupting in a splash close to swimmers.

When the sun approached, temperatures soared to 45 degrees and swimming was the only option. Guides and tourists alike spent the hottest parts of the day alternating between playing catch with palm nuts in the water and drying out on the banks. We weren’t alone; a small herd of elephants had stopped to revive themselves too. From matriarch to calf, they strolled into the water and sank in, close enough for us hear their trumpeting as they doused themselves. Our trip wouldn’t have been possible without our guides: the mokoro polers who live in a village on the edge of the delta. Not just expert canoe handlers, they are locals with an intimate knowledge of the delta’s flora and fauna, with mental maps drawn of the plains and waterways. It was through our guides we learned how to navigate using the north-south lean of a termite mound, and where not to swim if we wanted to avoid hippos and crocodiles.

More than that, our guides knew how to make us feel welcome. They were there to play as well as work, and if they were having a good time it meant we would too. As the sun went down Hippo would tell riddles that veered between the erratically indecipherable and childishly easy. They taught us traditional dances around the campfire, including one that apparently meant our friend Bonnie was now married to a poler, and another that required some exuberant frog-like hopping. I fell backwards into the dirt, the Batswana clearly have better calf muscles than me.

On our final night, we gathered round with our bottles of beer and plates stewed vegetables. The guides had prepared a special show for us, singing traditional Botswanan songs, as well as a couple they had written themselves. I’m sure they do this for every group, but it wasn’t something we asked for; it was a performance put on for the joy of singing and pride in their country and the Okavango Delta. As I drained the last dregs from my bottle, the air alive with the sounds of insects and crackling fire, I understood their pride. It’s a truly beautiful, wild and intense place.

Discover the magic of the Okavango Delta, Chobe National Park and beyond on Peregrine’s Delta, Dunes & Falls tour.

Jay’s home is in London but his heart is in the British Lake District. He’s obsessed with rainy wilderness and tall trees, so you might find him hiking around Canada in his spare time. When he’s not doing that, Jay makes radio programmes for the BBC.