I’ll never forget the sound of their medals – clinking softly as we walked through the deep cutting – the rock walls either side of us glowing gold with candlelight.

We were a bunch of strangers who’d come together at dawn on Anzac Day in a place once likened to the pits of hell. But as we moved slowly through Hellfire Pass in the humid air there was an overwhelming sense of peace and unity.

After the ceremony I had the opportunity to chat with one of the diggers. He’d flown to Thailand from Melbourne a few days earlier to make the pilgrimage to Hellfire Pass in Kanchanaburi.

He showed me his medals with pride, pinned to his navy jacket. He didn’t want to talk about the horrors of the prisoner of war camps; he just wanted to tell me about his mates.

“It feels nice being back here because it reminds me of all my friends. The war took many things from us but it also gave us the gift of mateship… a gift that I’ll treasure until the day I die,” he told me.

That was 15 years ago when only a handful of Australians made the trek to Thailand to be part of the dawn service. These days thousands flock to Hellfire Pass to take part in this special moment of remembrance.

In 1943 Japan decided to build a railway to connect Thailand and Burma in order to strengthen its campaign against the Allies. To achieve this, they used 60,000 Allied prisoners and 200,000 Asian labourers (known as romusha).

The men worked with basic tools and bare hands to cut through thick jungle and solid rock to lay down the track. The longest and deepest section was a cutting known as Hellfire Pass, which was given its name because of the way it looked at night.

“Like a scene out of Dante’s inferno… If you stood on top of the cutting you could see the burning fires at intervals of about 20 feet; you’d see the shadows of the Japanese… moving round with their sticks belting men.” – Bombardier Hugh Clarke, 2/10th Field Regiment.

By the time the so-called ‘Death Railway’ was completed in October, at least 2,815 Australians, over 11,000 other Allied prisoners, and an estimated 75,000 romusha were dead from starvation, sickness and maltreatment. 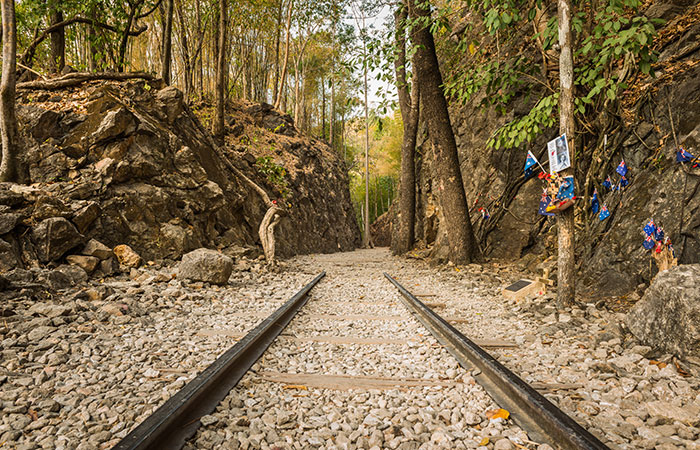 These harrowing facts and figures are brought to life inside the Hellfire Pass Memorial Museum in Kanchanaburi. It’s run by the Australian government and offers visitors the chance to see examples of tools that were used by the troops to cut through the rock, read old letters and diaries and walk a trail following the route of the Death Railway through Hellfire Pass.

The dark room, where black-and-white war photos are flashed up on a large screen, is particularly moving. There’s also a free audio tour, which allows you to hear the voices of diggers and doctors telling their personal stories as you walk through the museum and down to Hellfire Pass.

The Death Railway was a dark chapter in our history but it was not without moments of light. One story I discovered when visiting Kanchanaburi was that of Thai Trader Boonpong Sirivejjabhandu, affectionately known as Boon Pong, who risked his life to deliver much-needed food and medicine to Allied troops. His compassion saved many men.

Boon Pong owned a pharmacy and a general store in Kanchanaburi. From 1942 to 1945 he was the local Mayor and this role allowed him to do a deal with the Japanese to manage a canteen for prisoners at Hellfire Pass.

The arrangement gave him unrestricted access and he soon began smuggling medical supplies, provisions and radio batteries to prisoners. The impact his actions had on their morale was immeasurable.

In 1985, Sir ‘Weary’ Dunlop, who worked as a surgeon on the Death Railway and received supplies on many occasions from Boon Pong, gave an address at the Anzac Day ceremony in Kanchanaburi, in which he paid tribute to the Thais who helped Allied troops during the war. Quoting Shakespeare’s King Henry VI, Dunlop said of Boon Pong: “In thy face I see the map of honour, truth and loyalty.”

Boon Pong passed away in January 1982 at the age of 76. His remarkable bravery and the lifelong friendship he shared with Dunlop resulted in the establishment of The Weary Dunlop Boon Pong Exchange Fellowship, a collaboration between the Royal Australasian College of Surgeons and the Royal College of Surgeons of Thailand.

More than 90 Thai doctors have received scholarships to further their studies in Australia.

I recently returned to Hellfire Pass. Much has changed since I was there all those years ago. It might seem strange to be overcome by feelings of togetherness and tranquility given the history of the site, but many people who visit Kanchanaburi talk about experiencing similar emotions. And that was one thing that hadn’t changed for me.

Ange Takats has been chased by a tiger in a Buddhist monastery and run from falling rockets at a rainmaking festival. Her travel memoir - Buffalo Funeral - traces her journey from foreign correspondent to folk singer in the Land of Smiles. She's currently based in Bangkok. angetakats.com.au