A day in the life of an adventure cruise 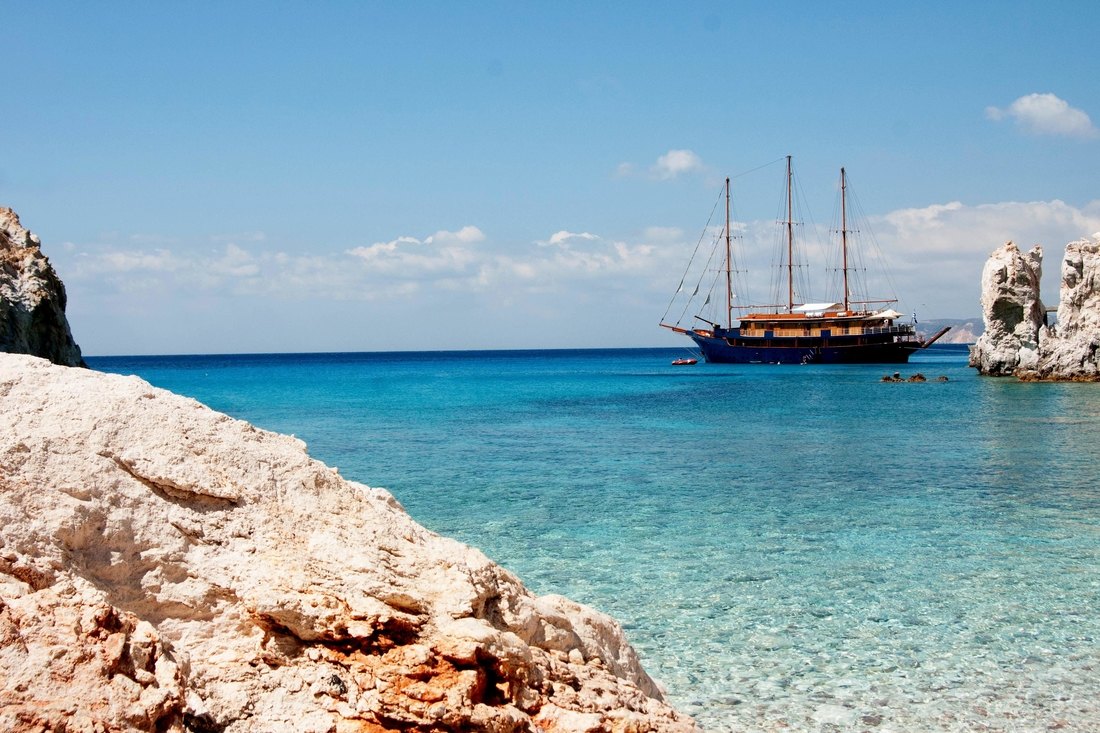 The daily itinerary on a big cruise ship, while fun (in a kid-in-a-candy-store kind of way) is pretty monotonous. Breakfast buffet, lie down, have a snack, fight for a deck chair by the pool, lie down, lunch, a matinee performance at the on-ship cinema, snack, lie down, dinner, repeat. Occasionally there’ll be a shore excursion, but usually you’re excursion-ing with 1500 other cruisers, and it’s very difficult to get a good feel for a destination (let alone escape the crowds and dodge selfie-sticks). You’re not really travelling so much as moving around.

Small ship adventure cruising is a bit different. For one thing, it’s hard to describe an average day on board. Every day is different – some spent sailing at sea, others in port, island hopping all the time – and itineraries are designed to be flexible. If there’s a quiet bay along our route and a few passengers feel like a swim, there’s nothing stopping the Captain from taking a detour and dropping anchor for an hour or two. If the weather is better on a particular island, or the sea is a little rough, a small boat is flexible enough to adjust its itinerary on the fly. That said, here’s an ‘average day’ from my recent small ship cruise in the Cyclades.

I wake up in my cabin to the gentle swaying of the waves. This took some getting used to at first, but by Day 3 it’s like being rocked to sleep on a train. I’ve never slept better. The sun is well up outside, but the room is still dark and cool (the room service team closed the porthole covers last night to help me sleep through the dawn). Time to get dressed and head up for breakfast.

Decisions, decisions. Today’s spread includes some fresh bread from Mykonos, a selection of fresh fruit and tangy Greek yogurt, plus bain maries filled with hash browns, eggs (scrambled and friend), sausages and bacon. Pastries, toast and preserves round out the selection. I take a single slice of pineapple to ease my conscience, then load up a plate of fried goodness. It’s going to be a good day. 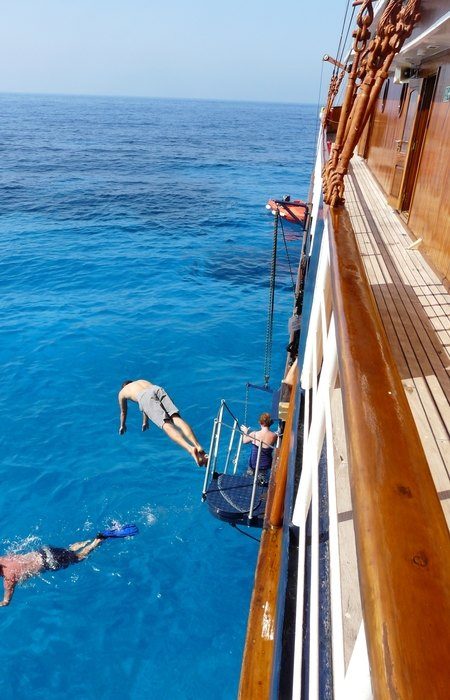 The crackle of the PA system and the voice of Joseph, your cruise coordinator: “Hello hello, beautiful people. We will be stopping here for a swim before cruising on to Syros. If you would like a dip, please get changed and come out to the main deck.” I walk briskly downstairs (no running on-board) and get changed, then head out to the lowest of the three outdoor decks. A few passengers are already splashing around in the Aegean. The water’s so clear you can make out every rock down below, every strand of seaweed. The crew has lowered some metal stairs into the water. I climb down and dive in. 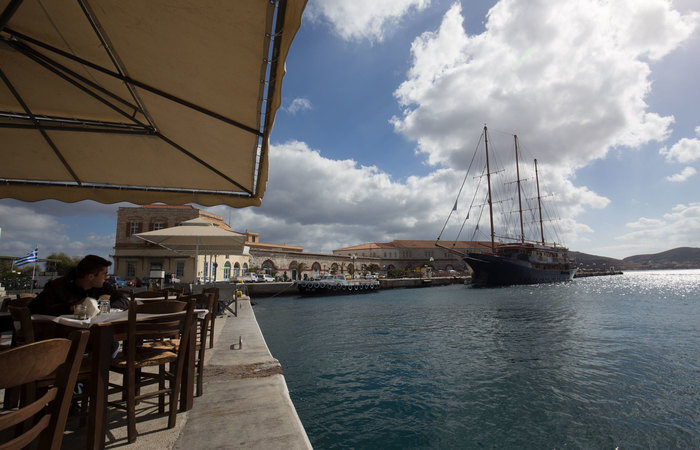 We arrive on Syros! There’s a couple of big cruise ships hanging off the coast, but we sail right past them into the harbour, pulling up next to the main restaurant strip. I can see locals out in the sun, eating gyros and sipping retsina. Joseph says we’ve got a few minutes to get ready, then we’ll head out on a tour of the old town. “If I could live anywhere outside Athens,” Joseph says, “it would be here. Wait until you see it.”

We disembark and begin wandering through the warren-like city streets. Everything’s paved in marble. Marble flagstones, marble sidewalks, marble buildings. “On this island,” Joseph says, “When you’re looking for real estate, people aren’t impressed by marble bathrooms. It’s more like ‘Oooh, oak floors…’” Joseph knows every street and building. Here the headquarters of the SS on Syros during the war, there the Town Hall and the Opera House, the market stalls and the old dynastic households. Apparently he knows a great place for lunch… 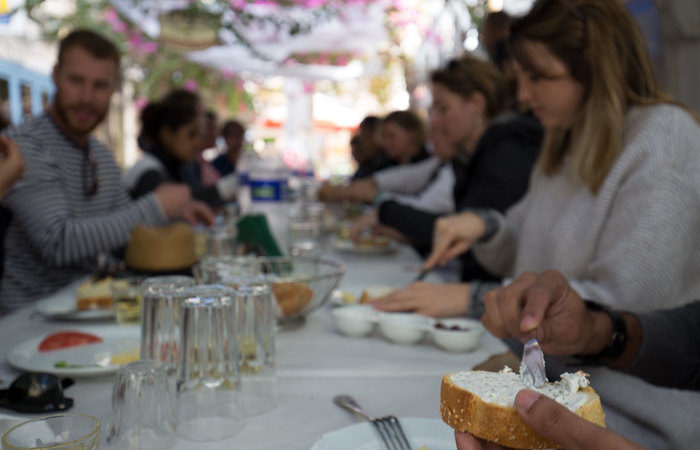 Now this is more like it. Sitting in a shady courtyard in the backstreets of Syros, blushing bougainvillea overhead, some hard Greek cheese on my plate and a cool glass of Greek wine in my hand. Joseph took us through the marble labyrinth –left, right, right, left, straight, then right again – and here we are, having lunch with the locals. Not a bad way to spend an afternoon. 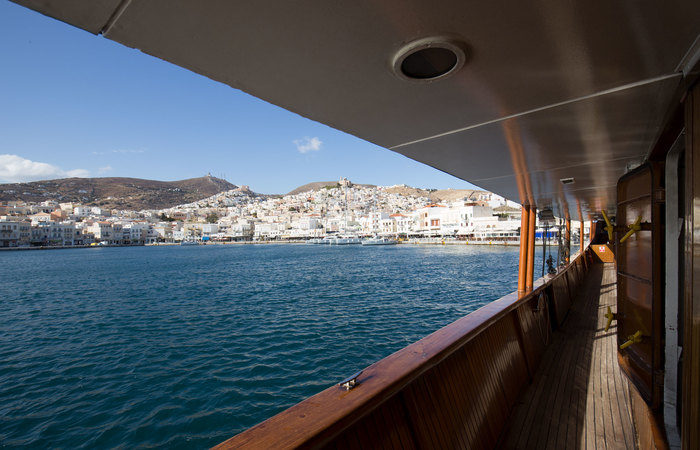 Syros seems to shut down in the mid afternoon. The shops have all closed their doors. I think everyone’s off having a siesta (even the stray cats look a bit more relaxed). I toy with the idea of an afternoon nap myself, but there’s too much to see. Joseph told us about the two churches that overlook the town, one Orthodox, one Catholic, perched on twin hills right next to eachother. I climb up through the streets, step by marble step, stopping every now and then to turn and soak up the view. Eventually I reach the Orthodox church, a cobalt-domed building surrounded by pine trees. It’s cool beneath the branches, and I slump down on a bench looking out over the harbour. Maybe I will have that nap…

Tonight’s ‘Greek Night’ on board. No-one was quite sure what this would entail, but a quick glance at the dining room shows the staff have gone all out. There’s Greek flags hanging from the ceiling, Greek napkins and table cloths, a buffet of golden saganaki, dolmades, marinated lamb kebabs and a hundred other local dishes ready to go. Some of the staff come round with trays of fresh char-grilled octopus and glasses of ouzo, filled to the brim. One whiff scorches my sinuses. Soon a Greek band appears (a group of young friends who Joseph tells us are from the local dance school). Two dancers show us some moves while the band plays tunes on the bouzouki and accordion. Soon we’re all up o the floor, Opa-ing with the best of them, dancing in a circle and looking ridiculous.

The night’s kicking on (those ouzos really pack a punch) but that’s enough for me. I wander downstairs to my cabin, footsore, tired and a little dizzy. The staff have made up the room to perfection, and there’s even a little chocolate on my pillow. I slump into bed and kill the lights. It’s been one hell of a day.