Truffles, cheese and confit: What to eat in the Dordogne 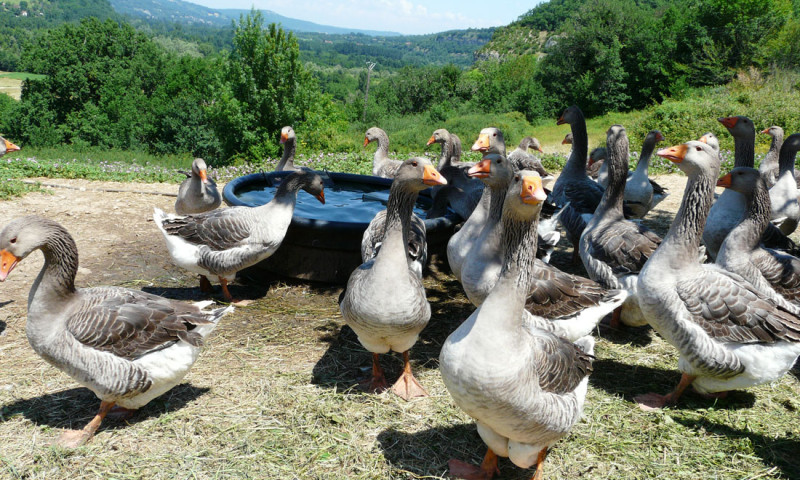 They say a Frenchman’s heart lives in Paris, but his stomach lives in Dordogne. While the Loire Valley and Provence have their charms, and while it seems a bit silly to compare one idyllic châteaux-dotted region with another, the Dordogne remains rather special.

Sure it’s got the endless fields, sun-dappled lanes, medieval monasteries and lilac-scented gardens of its neighbours, but there’s another reason thousands of visitors flock there from Paris each spring: the very best produce in France. With creamy goose liver pâté, tender duck confit, fresh walnuts, sugar-sweet strawberries and earthy truffles straight from the terroir, not to mention elegant Pécharmant and sweet Monbazillac wines refined by vintners for centuries – the Dordogne is the beating heart of French cuisine. 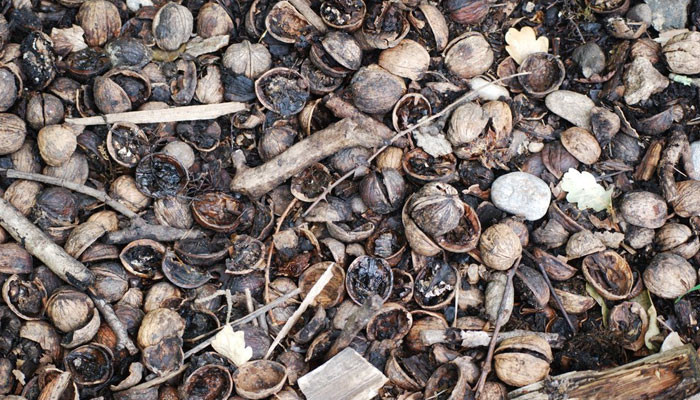 Walnut trees are to the Dordogne what olive groves are to Provence. It’s been a symbol of the region’s wealth for hundreds of years, and peasants in the tenth century used to pay their debts in bushels of walnuts, such was their value. They’ve even had AOC (designation of origin) status since 2002, which means, like true Champagne, Dordogne walnuts are recognised as unique and are protected as such. As you’re driving through Dordogne you’ll see rows of green walnut trees everywhere, particularly along the Dordogne River. They form a green cushion between the riverbanks and the jagged cliffs of the main valley. Follow the ‘walnut road’ along the river to taste fresh nuts straight from the trees, as well as a variety of oils and liqueurs made by local artisans. For true walnut lovers, try to catch the Walnut Festival in the little town of Thégra – it’s held on the last Sunday in October each year. 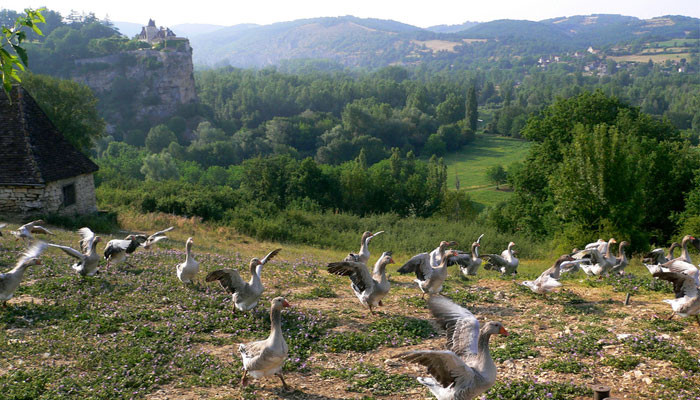 Duck or goose confit is another famous regional speciality of Dordogne, and it’s hard to drive for more than a few miles in the valley without coming across a poultry farm of some kind. To confit this beautiful free-range meat the bird’s legs are salted and flavoured with local herbs before being simmered for a long time in rendered fat. Stored beneath the congealed layer of fat, the legs can last for months, soaking up more and more flavour. When the time comes to serve, Dordogne chefs pull the legs out of the confit and crisp them up in a hot pan. They’re usually served with a light green salad and crispy golden potatoes fried in goose fat. As the cookie monster would say, duck confit is a ‘sometimes food’, but there’s no denying those times are pretty spectacular. 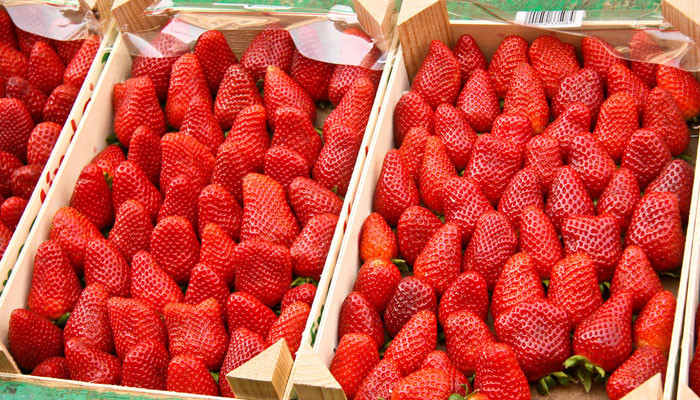 The strawberry is a fairly recent addition to the Dordogne menu (at least compared to other produce) and was first cultivated here in the late 19th century. But oh how things have changed. The region is now the second-biggest producer of strawberries in France, and chances are good that the juicy punnet you’re ogling in a Montmartre market started its life on the sunny banks of the Dordogne. The climate here makes the Dordogne a kind of strawberry haven: rich, light soils, lots of sun and close proximity to the sea. As the seasons shift, new strawberry varieties emerge: Gariguette and Darselect in spring, then the climbing varieties Mara des Bois, Charlotte, Cirafine and Seascape in summer and early autumn. 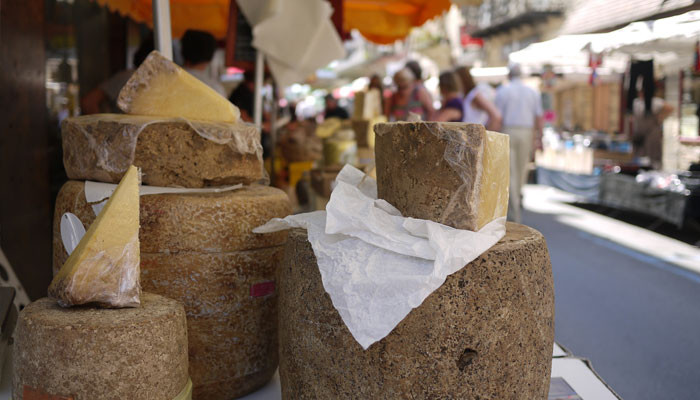 It wouldn’t be French without some world-class cheeses, would it? There are 35 artisanal cheese makers in the Dordogne, and you’ll find their creamy wares at markets right across the region. These are the farmers who milk their own animals and make their own cheeses, often with techniques that haven’t changed much in 500 years. You’ll find fresh Cabécou everywhere, but foodies also travel a long way to try the extra strong, matured goat’s cheese varieties, which are increasingly difficult to find. The cheeses’ flavour changes with the seasons, as the goats snack on different seasonal produce, such as blackberries in September. Each supplier’s flavour will differ slightly based on their specific moulds and yeasts, as well as the plants growing on their land. Creamy and silky smooth, one bite of real Dordogne goat’s cheese won’t be forgotten in a hurry. 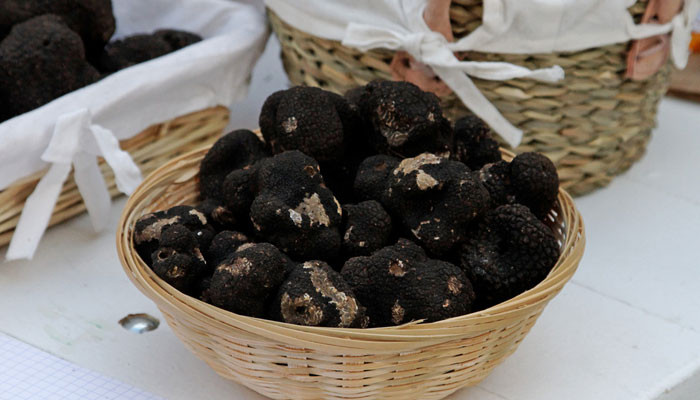 In the oak forests of the Dordogne, wild boar snuffle for truffles in the autumn undergrowth, burrowing deep into the soft earth. It wasn’t long until the locals realised there was quite a bit of money to be made from this native treasure trove, and now the Dordogne is considered the home of French truffles. Aficionados and gourmands should make their way to the village of Sorges, the region’s self-proclaimed truffle capital. There you’ll find a great truffle museum and, of course, every variety of truffled produce you can imagine: pear and truffle jam, green tomato and truffle chutney, truffle mustard, truffle honey and even truffle ice cream. Fresh Dordogne truffle sells for about 800 euro a kilogram, but you won’t need much shaved on your eggs in the morning to appreciate the earthy aroma of this natural marvel.