7 amazing things to do in Borneo 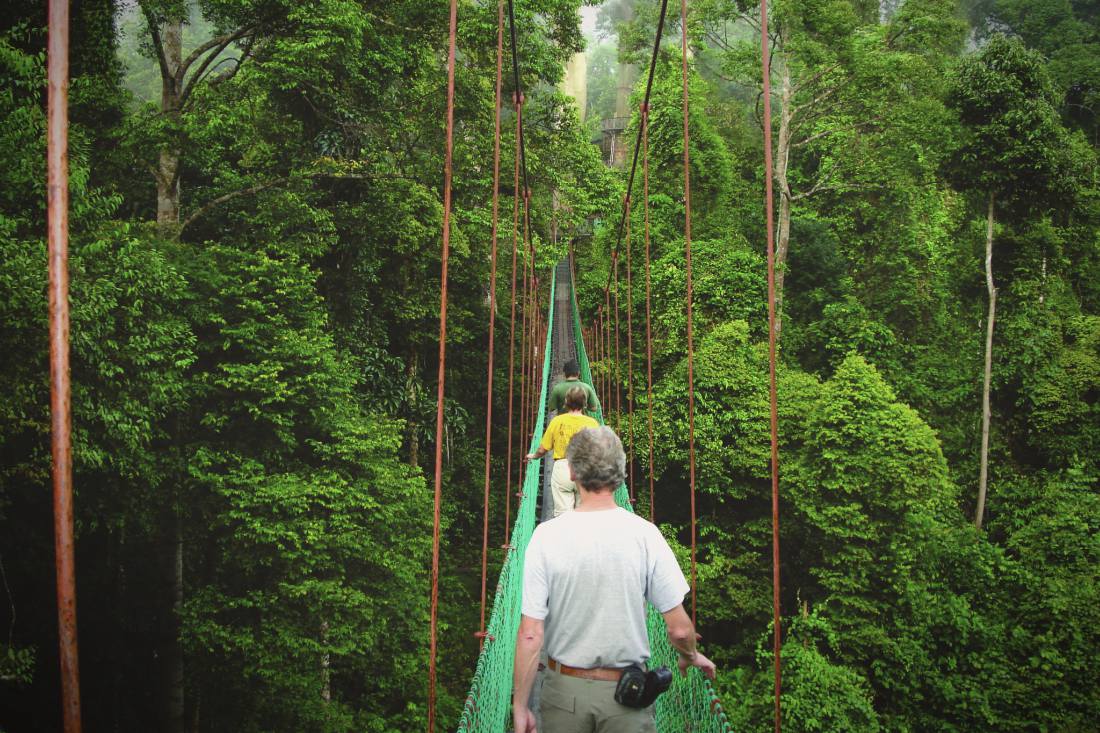 Far beyond the urban hubbub of Penang and Kuala Lumpur lies the Malaysian island of Borneo, home to ancient jungles, tropical reefs, deep caves and some of the rarest, most fascinating wildlife in Asia. With iconic mountains to climb (Kinabalu), Cantonese-influenced harbour towns to discover (Sandakan) and national parks to explore (Kinabalu, Mulu, Tanjung Puting), you’ll never be stuck for something to do. But with so much to take in, it’s be tricky to know where to start. Presenting Peregrine’s pick of things to do in Borneo: 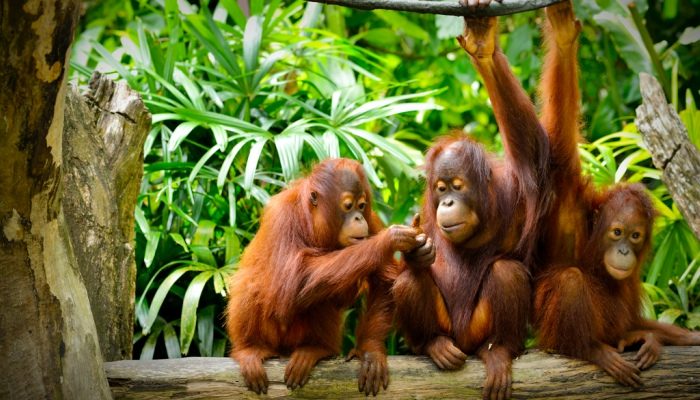 The Sepilok Orangutan Rehabilitation Centre (SORC), on the island of Sabah, is one of the last remaining places you’ll find the orangutan. The centre was founded in the 60s to rehabilitate orphaned and injured orangutans before returning them to the wild forests of Borneo. Now home to between 60 and 80 orangutans, the reserve draws researchers and travellers alike, keen to catch a glimpse of the enigmatic, rare creatures in their natural habitat. You can watch and photograph them as they swing from ropes and vines, but it’s important not to interrupt them. An outdoor nursery has recently opened, where young orangutans born into captivity or who have lost their mothers are cared for.  A visit to the Sepilok Orangutan Rehabilitation Centre is truly special, and educational, too; you’re guaranteed to leave with a renewed respect for animals and the world that we live in.

2. …and Proboscis monkeys at the Labuk Bay Proboscis Monkey Sanctuary

On Peregrine’s 10-day Untamed Borneo trip, you’ll also visit the nearby Labuk Bay Proboscis Monkey Sanctuary, where you’ll see the famous monkeys – found only on the island of Borneo – feeding with their different family or bachelor groups. You might even cast eyes on a hornbill or two! 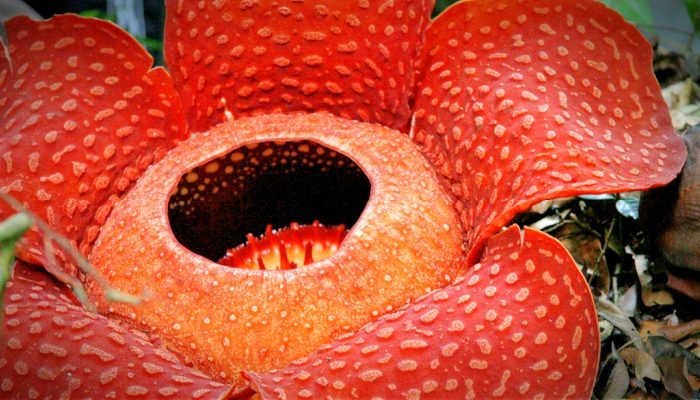 Rafflessia, the biggest flower in the world, is found in Kinabalu National Park.

Mt Kinabalu – the tallest mountain in Malaysia (and the 20th tallest in the world) – forms the centrepiece of the incredible Kinabalu National Park, a World Heritage-listed area area about an hour’s drive from Kota Kinabalu. Many people climb the peak for the physical challenge, as well as to see its miraculous biodiversity (orchids and pitcher plants in particular), but the trails around the base of the mountain offer up their own blood-pumping adventure and exotic flora and fauna.

One of the park’s most famous attractions is the parasitic Rafflesia plant, which is considered the world’s largest bloom. These fleshy, bright red flowers have a pungent smell (they’re often referred to as ‘corpse flowers’), which only gets worse after they wilt. Although they sound hard to miss, they’re actually quite rare, and you’ll only stumble across one if you’re lucky. Although perhaps ‘lucky’ isn’t quite the right word to use…

4. Snorkel and relax on Manukan Island 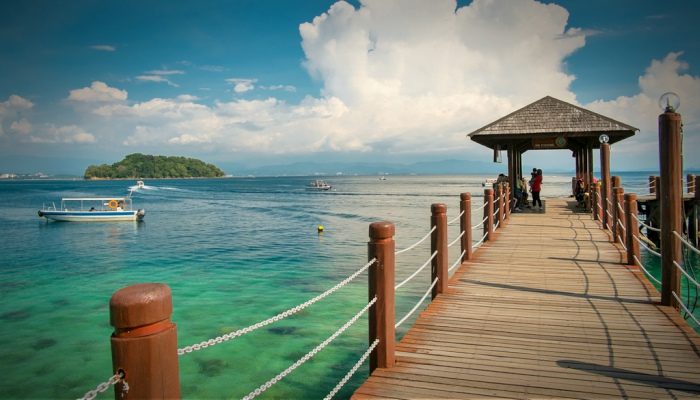 Found just 20 minutes off the coast of Kota Kinabalu, Manukan is one of the larger islands in the Tunku Abdul Rahman Marine National Park. Here, you can relax on the 1.5km-long beach (lovely for a stroll at low tide), kick back with a drink and a book, and wander along a jungle trail to a beautiful sunset lookout. During the day, don your swimmers for a spot of snorkelling or even scuba diving; the reefs surrounding the island are teeming with technicolour tropical fish. If you look up ‘paradise’ in the dictionary, you may well find a picture of Manukan Island.

In the state of Sarawak you’ll find Gunung Mulu National Park, famous for its biodiversity and especially its dramatic tropical karst landscape – of limestone peaks and pinnacles, ragged cliffs and peat swamps. Mulu is also home to one the world’s most impressive caves, the bat-filled Deer Cave (which leads to a hidden valley and waterfall known as the Garden of Eden), and Lang Cave, both of which you reach by following a scenic jungle plank-walk through the park. You can also visit Wind Cave and Clearwater Cave; spanning more than 100 kilometres, the latter is the longest cave in Asia. You’ll see all on Peregrine’s small group Borneo Adventure tour.

6. Bird-watch as you cruise along the Kinabatangan River 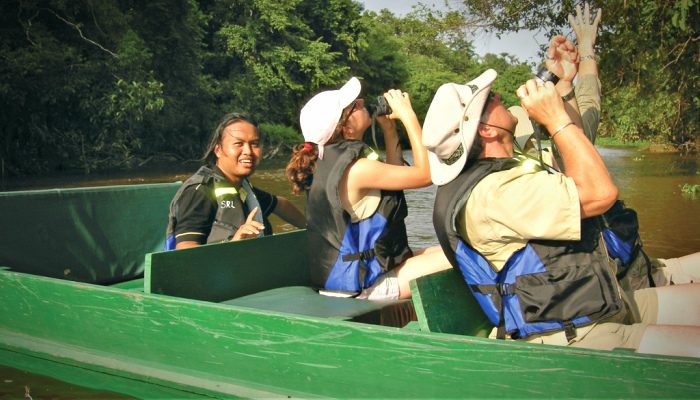 Hornbills and kingfishers are a common sight along the Kinabatangan River. Image c/o Becky Last.

Kinabatangan River is one of the longest in Malaysia, and the protected forest reserve surrounding it has some of the highest concentrations of wildlife in Borneo. We’re talking crocodiles, long-tailed and pig-tailed macaques, wild orangutans, proboscis monkeys, and even the occasional elephant, plus a wide array of exotic birdlife. The best way to take it in, of course, is by river cruise.

If you travel with Peregrine, knowledgeable leaders know where to point out the birds you’d like to see, from Storm’s storks and Bornean falconets to a variety of eagles, hornbills and kingfishers. Staying in a nearby nature lodge and waking to the sounds of the jungle is a pretty special experience, too. 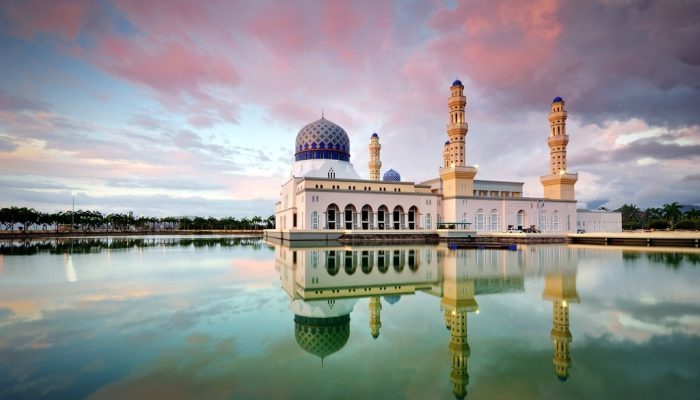 The capital of Sabah, ‘KK’, as it’s affectionately known, was born between the Bornean jungle and the South China Sea. A true frontier town, there’s plenty to explore here. There’s good food everywhere, which you mightn’t expect considering how far into ‘the middle of nowhere’ you are, plus shops, museums and the Monsopiad Cultural Village – once home to an infamous headhunter. Kota Kinabalu is a key part of any Borneo travel itinerary.

Note: this post has been updated. It was originally published on 24 March 2015.

You can experience all of the above (and more!) on a small group journey with Peregrine. Take a look at our Borneo itineraries here.