Antarctica vs The Arctic: how to choose your polar tour 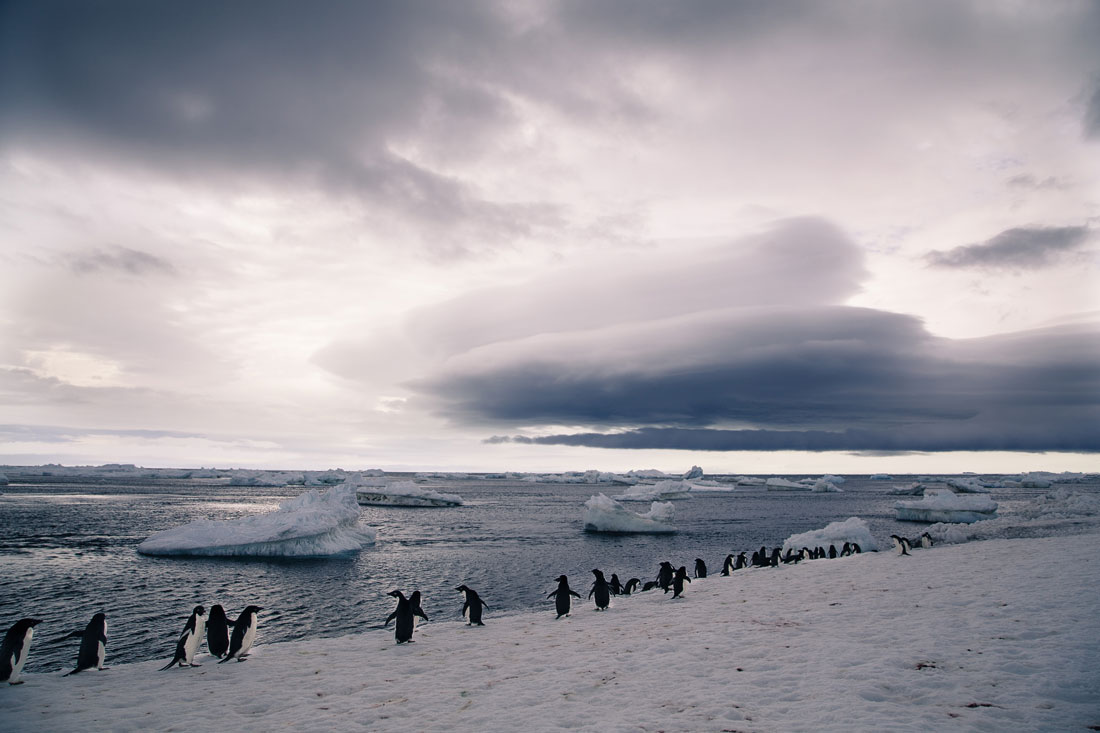 It’s all very well to settle on a polar adventure for your next big trip, but which direction do you go? North to Greenland, Canada and Norway? Or south from Cape Horn, all the way to the Antarctic Peninsula? There’s no right answer. Each hemisphere has their merits. Ideally we’d say do both, but if you’re trying to decide between polar bears and penguins, Northern Lights or Antarctic ice sheets, freezing cold or…freezing cold, this guide will help.

At the end of the day, neither experience will be a disappointment. Try to base your decision on what you want to get out of the trip. Wildlife? Sea ice? Adventure activities? The sense of a real expedition? 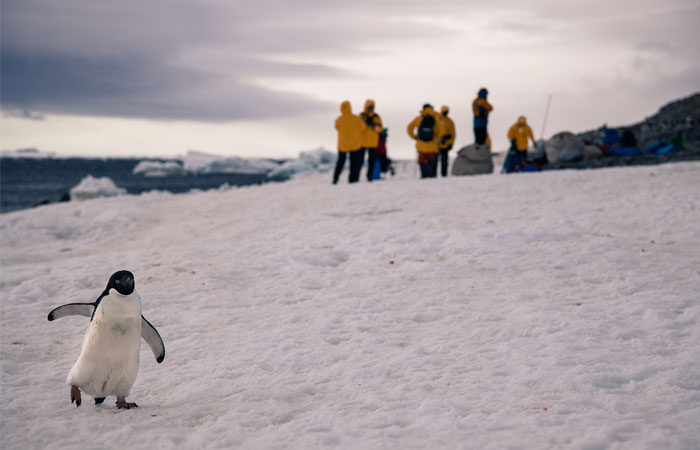 Antarctica really is the frozen ends of the earth. It’s the highest, driest continent on the planet, and to get there requires a trip by sea across the storm-wracked Drake Passage between South America and the Antarctic Peninsula (unless you cheat and catch a very expensive plane). Unlike the Arctic, 98% of Antarctica is covered by ice, so the landscapes (although incredible) are largely the same: icy mountains, huge glaciers, sea ice and calving icebergs. If you’re coming for plant-life and colourful flora, forget it.

Temperatures during the warmers months will still often be below zero, probably around -13 degrees Celsius, making it colder on average than The Arctic.

In terms of wildlife, Antarctica is obviously where you find penguins: Adelie, Chinstrap, Gentoo, King, Emperor, RockHopper and Macaroni penguins to be exact. There’s also an abundance of fur, leopard and Weddell seals, as well as migrating Humpback and Minke whales.

The Arctic, at a glance

The Arctic is fundamentally different from Antarctica because it is a frozen sea, not a frozen continent. Technically an ‘Arctic’ voyage will probably take into account any of Greenland, Norway, Russia and northern Canada, which means there’s a much bigger variety of both wildlife, landscapes and flora on offer. You’ll find incredible ice sheets and glaciers on Greenland, but then there are also the Taiga forests of Russia and Canada, the inky fjordlands of Norway and the volcanic lava fields of Iceland. The temperature is a little warmer than Antarctica, but don’t pack your bikini: in the warmer months it can edge above freezing, but it’ll probably still be a few degrees under depending on where you are.

In terms of wildlife, Polar Bears are The Arctic’s big drawcard (you won’t find them anywhere else), but there’s also migrating humpback and grey whales, walrus and harp seals, and large land mammals like reindeer, musk ox and Arctic foxes. 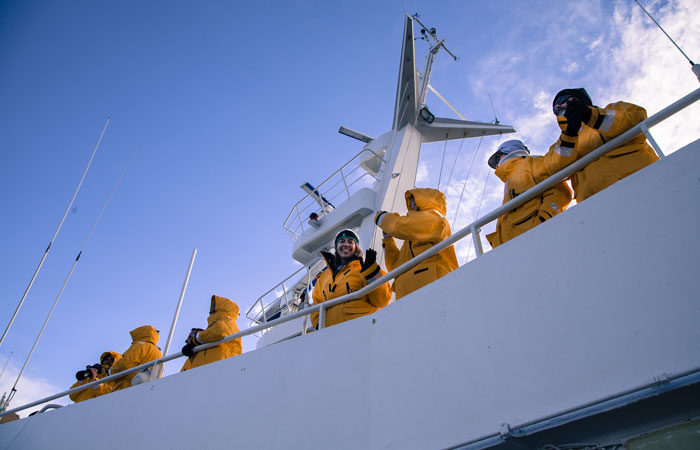 For a lot of passengers, it comes down to a simple choice between polar bears and penguins. And there’s nothing wrong with basing your decision on that alone. It’s worth keeping in mind that, while you’re basically guaranteed to visit vast penguin colonies in Antarctica, spotting a polar bear on the ice flows of Spitsbergen isn’t quite so easy. Our captains and guides know the best places, but it’s not something that can be guaranteed.

Something seasoned Polar travellers learn to appreciate is, funnily enough, ice. Eerie blue sculptures, carved by wind and rain, snout-nodes glaciers calving into the sea, massive icebergs floating past your port hole. Both the Arctic and the Antarctic have vast icesheets that spread across the surrounding ocean as it freezes solid over winter. But if you’re looking for the biggest, the best, the most impressive, Antarctica probably edges out its northern rival. 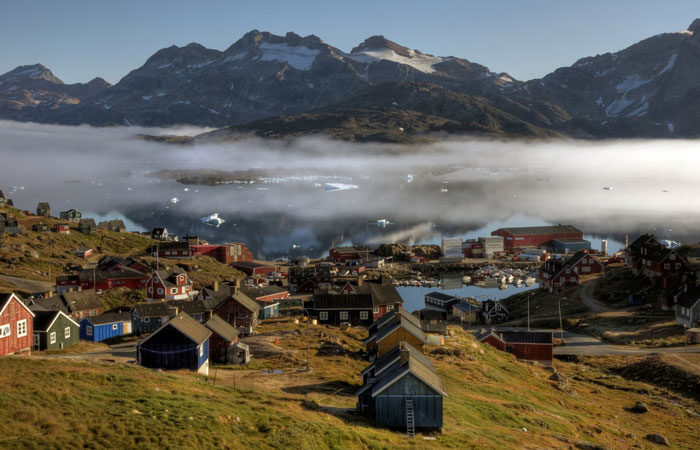 It sort of depends on what you’d like to see. For Antarctica, the overall best time to travel is between late November through to the end of February. The temperatures are warmer (by Antarctic standards, anyway) and you might catch the birth of penguin chicks if you travel in mid to late January. If whale watching is your thing, it’s at its best from February through to March.

For the Arctic, cruises are determined largely by the retreat of the sea ice (it’s hard to cruise on mile after mile of solid ice). High summer is the best time, which runs from late June through July and August. Those two months in particular are the height of the Spitsbergen travel season, and give you the best chance to spot polar bears, Minke and Humpback whales, birds and walrus colonies.

How to get there? 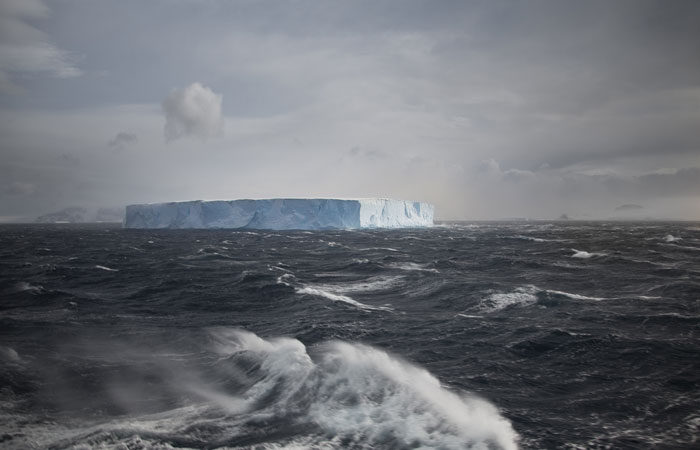 One thing that gets lost in all the ‘adventure of a lifetime’ talk around polar expeditions, is that neither The Arctic or Antarctica is impossible to get to, or even particularly difficult. The Arctic is a broad term, but most cruises will circumnavigate Spitsbergen. The airport there is only a few hours from Oslo. Other Arctic journeys may depart from Reykjavik (just over two hours from London) or Ottawa near the border of Quebec. Flights to these places from major airports are not unduly expensive, and in fact the big advantage of The Arctic over Antarctic is that you can quite easily tack it on to any existing journey in the Northern Hemisphere, whether you’re in America, the UK or Europe.

Antarctica is a little different. Although it sits at the southern pole of the planet, the average traveller can realistically only access a small part of it: the Antarctic Peninsula. This is done from Ushuaia in Argentina, via a 2-3 day crossing of the Drake Passage. There is also a flight available from Tierra del Fuego if you’re dead against an ocean crossing.

Explore Antarctica or The Arctic for yourself on a Peregrine small group tour.