Living at opposite ends of the world, penguins and polar bears have made very different homes for themselves. And let’s face it, if the two were to inhabit the same place we would very soon end up with some very fat polar bears and a rapidly declining penguin population.

With Antarctica as their home, they might be dressed to thrill, but these comical little creatures are always ready for action. On land, they have rather poor eyesight but once in the water they have exceptional vision. Like many sea animals, penguins are attuned to the colours of the sea, which helps them avoid predators like leopard seals and killer whales.

There are a whopping 17 different kinds of penguins in Antarctica, including the King Penguin, the Rockhopper, the Macaroni, the Chinstrap and the famous Emperor Penguin – which can reach up to one metre tall and starred in 2006’s Happy Feet.

Polar bears call the Arctic their home. And it’s a common misconception that they have white fur. In fact, each hair shaft is transparent and has no pigmentation. Each shaft has a hollow core that scatters and reflects visible light (much like what happens with ice and snow).

Underneath, they have black skin and under that is a layer of fat that’s around 12 centimetres thick. Although it’s the fur that stops them suffering heat loss, and most adult males are at risk of overheating when they run.

These elusive creatures are found in five nations: US (Alaska), Canada, Russia, Greenland and Norway. As the world’s largest non-aquatic predators they sit at the top of the Arctic food chain, and their only predator is human.

It’s the daddy penguins who are responsible for taking care of the unhatched eggs, while mum heads off to hunt for food. Using its feet to keep the egg off the ice, the male penguin incubates the egg throughout the harsh winter. Babies are born with a soft, gray down that helps protect them from the cold, and usually stay in the nest until the parents decide they no longer need constant supervision.

After feeding heavily in April or May, the female polar bear will dig herself a “maternity den” in late October to settle down and prepare for the arrival of cubs. Twins are most common, with baby polar bears measuring about 30-35 centimetres at birth. They are blind, toothless and totally dependent on their mothers for warmth and food. While she’s in the den, the mother does not eat, drink or defecate and doesn’t emerge with her cubs until about March or April. 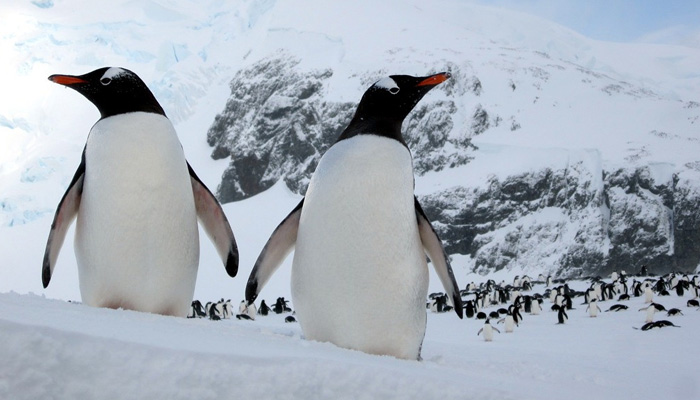 When hunting, penguins will usually go for a few different kinds of prey. They gravitate towards krill (which is a kind of shrimp), small squids and small fish.
Penguins can dive up to 35 meters in the water, storing food in their mouths thanks to a series of spines that point down their throats. And with no teeth, they don’t need to chew their food.
Different species will travel different distances when they are looking for food. Some will go as far 15 kilometres, while some will actually venture as over 800 kilometres for food. Sometimes, penguins will actually get their nourishment in holes meant for seals, or other various cracks in the ice.

These mighty creatures are responsible for keeping the seal population under control, and approach their job with zeal. They mainly feed on ringed seals and bearded seals, but if these aren’t available they’ll eat other water mammals, reindeer, small rodents, sea birds, ducks, fish, eggs, vegetation (including kelp), berries, and (sadly) human garbage.

A polar bear’s stomach can hold an estimated 15-20 percent of its body weight and they need about 2 kilos of fat per day to survive. One ringed seal weighs about 55 kilos so could provide a polar bear with up to eight days of energy.

Venture north and track polar bears in Spitsbergen, or head to Antarctica and surround yourself with waddling penguins? Either way you’ll need a Peregrine polar trip.