6 things I learned while cruising the Greek Islands 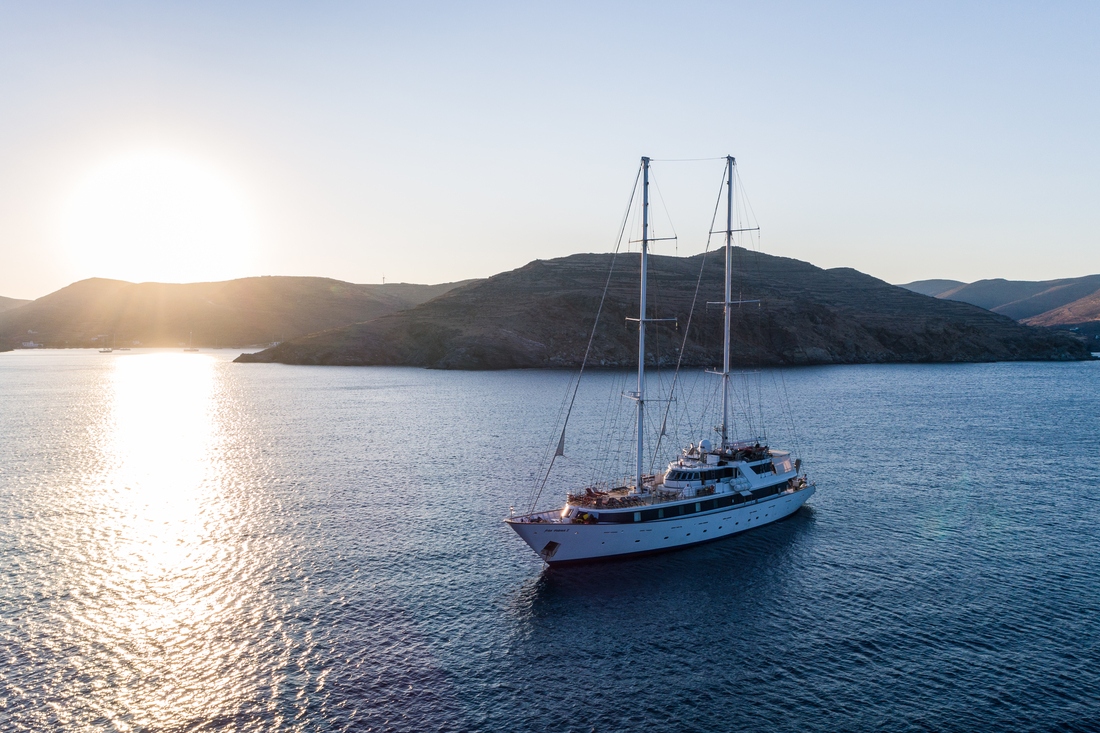 When I decided to head to Greece for a week-long, small ship adventure cruise through the Greek islands, I pictured leisurely strolling through quaint alleyways, eating as many spanakopitas as I could lay my hands on and jumping off the back of the boat into that deep, blue Aegean sea.

I imagined pulling right up to port in Santorini as well as exploring tiny, lesser-known islands. I didn’t realize I would be learning life lessons, but travel has a funny way of teaching you things when you least expect it. 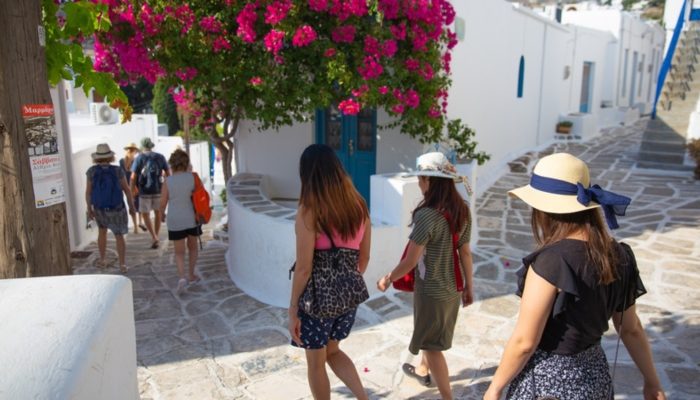 My group strolling through the village of Lefkes on Paros

On one of our first stops of the tour, my group and I got to wander through the charming village of Lefkes. This place was truly picturesque; the streets were pristine, every building was immaculately whitewashed and every balcony was swathed in bougainvillea vines.

While we were enjoying the smell of freshly baked bread emanating from nearby homes, we noticed an elderly woman and her two grandchildren painting the sidewalk. She was carefully tracing the outline of the cobblestones in a fresh coat of white paint. I looked at my leader quizzically. “There are no street-cleaners here on Paros,” she explained, “Everyone is responsible for picking up their own trash and taking care of their section of the street”. I looked around again to ensure my eyes weren’t deceiving me – nope, it was just as pristine as I thought. I smiled. I guess that’s how it works when everyone is willing to do their part.

2. Put your differences aside 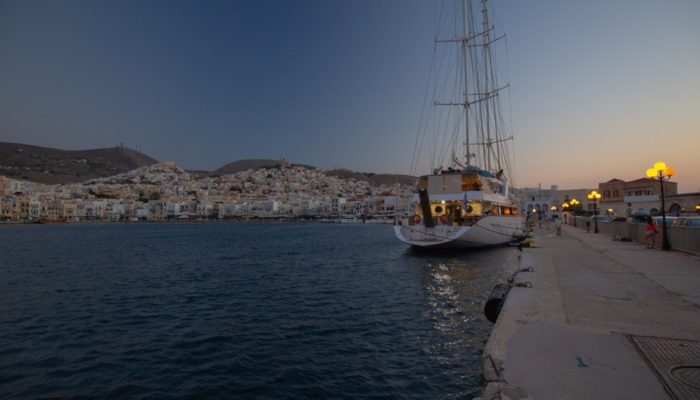 Our ship and the Syros skyline

As we pulled up to port in Syros, the town stretched out before us, we asked one of our local leaders, Dina, about the two large churches that dominated the highest points on the island – one clearly Greek Orthodox and the other Catholic. She explained that in medieval times, the Venetians made the island a Catholic settlement, but during the Greek war of independence, Greek Orthodoxy took over. Since the Catholic community remained neutral during the revolutionary years, their presence remained and the two religions learned to co-exist.

Nowadays, it seems to be a non-issue. When I asked Dina if there are any problems with people inter-marrying, scenes of Montagues and Capulets being conjured in my mind, she just shrugged, “Nope. If there are kids, they simply take the father’s religion. There’s no problem.”

3. Work hard, but not too hard 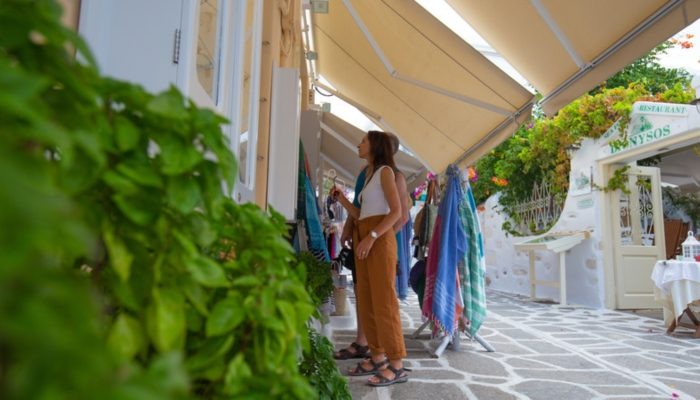 Browsing the shops (once they re-opened)

“They really are closed!” I said to Debbie, another woman on my tour as we walked through the normally people-filled streets of Syros. We had been warned that most shops shut down between the hours of 2-7pm for a siesta of sorts. But being from big cities in Australia and Canada respectively, Debbie and I couldn’t quite believe it. We halfheartedly browsed through the handful of souvenir shops that remained open before retiring to our comfortable (and mercifully air-conditioned) rooms on the ship for a siesta of our own. Resting during the hottest part of the day definitely did us some good, and I kept this Greek way of working in mind for the rest of the trip. 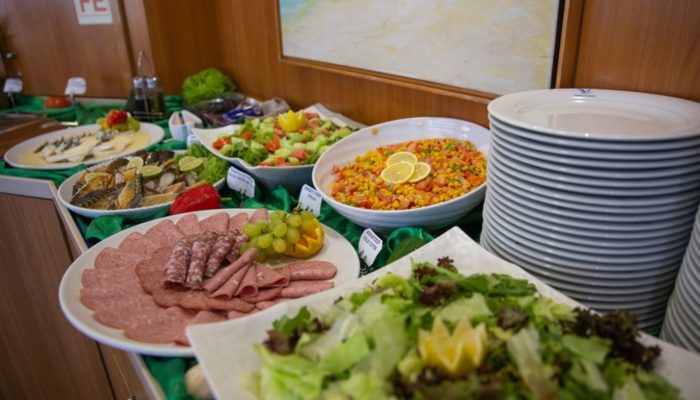 On my last last day in Greece, I was wandering around Athens with a few of my fellow travellers before they left for the airport. We decided to pay a visit to a tiny souvlaki shop we stumbled upon. It was about 10am and we had just had a sumptuous breakfast buffet on board our ship, the Panorama II, but I figured, when in Rome (or should I say, Athens)!

As our pork skewers sizzled away on the grill, I grabbed a business card. It read, “Est. 1950”. They had maintained the same recipe and the same location for 68 years. When I took my first bite, I realized why this shop had been successful for so long – the simple combination of pita, pork, tzatziki, red onions and tomatoes was perfection. We devoured our pitas standing on the side of the road (it’s pretty much the only place to eat at Kostas’) and marvelled at how meals made of simple, fresh ingredients that are shared with friends are always the best.

KNOW BEFORE YOU GO: WHAT TO PACK FOR AN ADVENTURE CRUISE

5. Anything can be overcome with a sense of humour 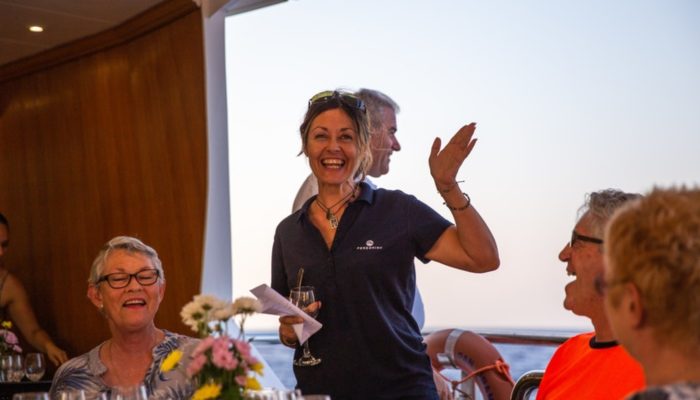 Our local leader, Olga, all smiles on board the ship

One night, in a conversation straight out of My Big Fat Greek Wedding, we were challenging the ship’s crew to demonstrate how the origin of any word is Greek. I’m still not sure if they were making it up or they actually knew the etymology of every word we came up with, (supercalifragilisticexpialidocious was the only one that stumped them), but it was good fun. “The Greek language is so rich,” our captain Michalis boasted. “But Greece is not!” cracked the second mate, Rafael, and we all shared a laugh.

In another instance, the group was visiting a pottery studio on Sifnos, and while we watched the artisan, Yiannis, pump his foot pedal and mold the clay with his hands, he clarified, “I am barefoot because it is easier to turn the wheel – not because of the crisis!” It’s no secret that Greece has been going through some economic troubles, but its people know humour helps you get through tough times.

READ MORE: A DAY IN THE LIFE OF AN ADVENTURE CRUISE 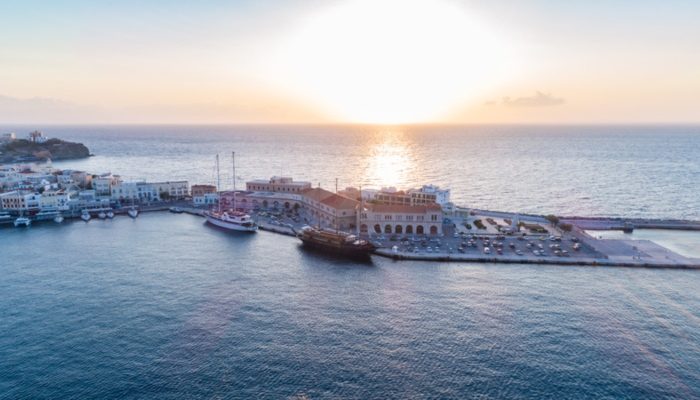 Sunrise over the harbour in Syros

I woke up early one morning to see the sunrise over the harbour in Syros. (Are you noticing a pattern yet? Syros was one of my favourite islands, and I learned a lot there). As I strolled down to the water, I spied a man doing laps in the harbour and two ladies treading water and chatting. I rounded the corner to be greeted by another older women wearing a floral dress and bright white running shoes power walking around the harbour. “Kalimera!” she greeted me cheerily. I smiled at her and she power walked on. Then, a group of young men and women rounded the same corner, stumbling and laughing and wearing what I’m almost certain were last night’s clothes. They took turns taking swigs from a bottle. I smiled at them too.

I think the real lesson here is simple: the key to life is balance. Eat good food, but treat yourself sometimes. Work hard, but not too hard. Make sure you stay awake until the sun rises at least a few times in your life, but make sure you’re up early to greet it occasionally too.

Inspired to cruise through the Greek Islands? Explore our Greek Island Cruising (Jewels of the Cyclades) tour.