Nepal, always: why tourism means more to the Himalayas than foreign aid 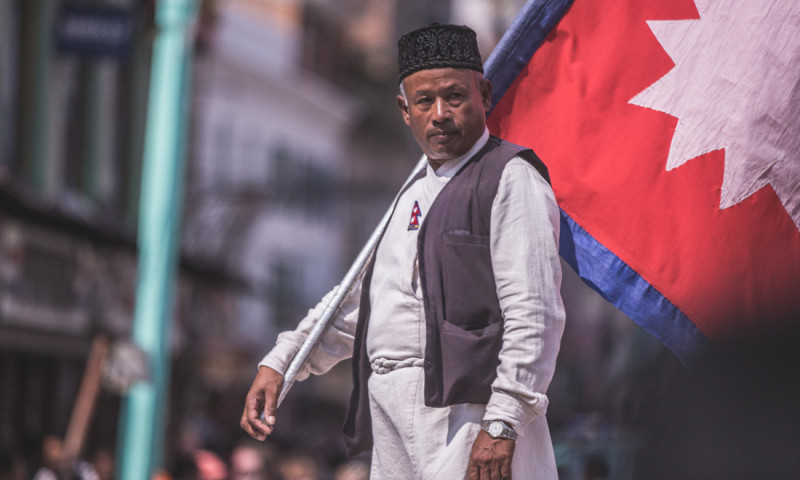 When I was in Nepal I met a man who explained to me the meaning of the country’s flag. It’s the only non-quadrilateral one in the world (meaning it’s got more than four edges); a twin pennant, red on blue, with a white star and crescent moon sitting proudly in the middle. It looks a bit like something Nelson might have used to give orders at Trafalgar.

“What does it mean?” I asked the man. He smiled and scratched his chin, trying to work out how to play subtle notes of meaning on a crude instrument like English, his second language.

“It is about permanent,” he said, “about forever. It means ‘Until the sun and the moon, Nepal always.’”

What he meant was, ‘As long as the sun and the moon exist, so will Nepal’, but I prefer it his way. English gets a lot more poetic when you strip it of syntax, and ‘Nepal, always’ are two words that summed up the quiet, everyday courage I saw when I visited the country six months after an earthquake ripped it apart. It’s not the chest-beating courage of defiance, more the dinner table, heads down, get on with it stoicism of a country that has suffered before, is suffering now, and knows it will suffer again. 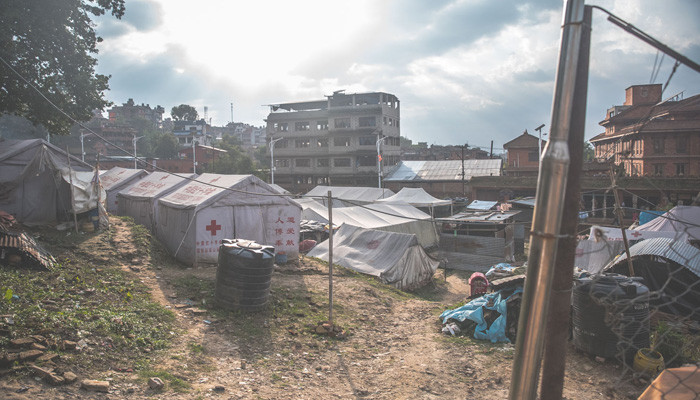 I was in Nepal with a group of journalists and a photographer, capturing a little of the country ahead of the new trekking season. Perhaps not surprisingly, traveller numbers are well down on previous years, and that’s bad news for a country so dependent on tourism, an industry that makes up about 5% of the total GDP and employs hundreds of thousands of people.

When the 7.8 magnitude quake struck the Gorkha district on April 25 this year, it made global headlines, but within a couple of months the TV crews had packed up and gone home, leaving Nepal to work things out as best it could. As it turned out, aid wasn’t really the problem.

“Nepal is awash with aid money,” says Nick Cowie, Intrepid Travel’s manager of operations in Nepal. “Money isn’t the problem. It’s making sure those funds get to where they’re needed. Do you know how many charities there are in Nepal?”

“It’s in the tens of thousands. The problem with that is you have this big, bloated bureaucracy, which increases the opportunities for corruption and makes it that much harder for people to see actual change on the ground.” 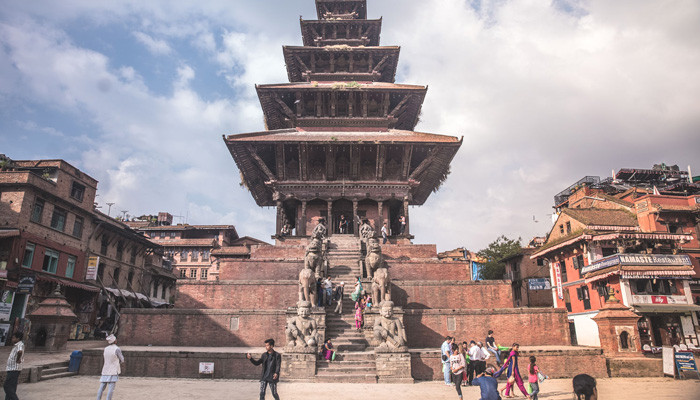 The answer to the problem, Nick says, is tourism. Because when travellers come to the Himalayas, they eat at local restaurants, stay at local teahouses, buy gear at local shops in Thamel and Namche Bazaar. The money goes from one pocket to another, and that’s where it stays.

It’s hard to calculate the scale of the flow-on effect, but a guide in the mountains helped me to understand it. His name was Pemba, and he’d been working as a porter and then a trekking guide since he was 16 years old. His family are farmers from the valleys below Lukla, down in the foothills of the Himalayas. Every year he leaves the farm and walks through the mountains to Namche, ready to greet a new season of trekkers; and every year, as the monsoon rains sweep over the peaks, he walks back, pockets full of savings, to help his family on the farm. It’s that money that keeps them afloat during the lean months or when the crops fail. For every porter, guide and Sherpa you see, there’s a family somewhere who rely on his trade. Tourism dollars trickle out of the mountains, like the rivers, flowing down towards the sea.

We trek for two days back from Namche Bazaar (the gateway to Sagarmatha, Nepal’s Everest region), and I spend it picking Nick’s brain.

“What about the quakes?” I ask him. “Because the real challenge you’ve got here is not just rebuilding the country, but rebuilding confidence in travellers.”

He nods. He’s heard it all before. “What people don’t understand,” he says, “is that earthquakes built these mountains. As the Indian plate sinks below the Eurasian plate, it pushes the Himalayas up. They’re one of the only mountain ranges in the world that is actually growing, inch by inch, each year.”

We stop by a little waterfall. The water here runs cold and clear in the streams, but becomes cloudy as it joins the torrents in the valley below. Rushing, roaring, churning, surging rivers, flecked with white caps. Locals call them the Milky Rivers, pale with minerals and rock dust, the ground-up bones of the Himalayas. “And the quakes?” I ask again.

“You get a quake here literally every day,” Nick says. “A big one every hundred years or so. You look back through the country’s history and it’s like a cycle. The last big one was in 1934, and now we’ve had one this year. Fast-forward 100 years and there’ll be another. In a weird way it’s a good thing, because it releases the pressure buildup. Now the country can rebuild and recover in peace.”

As Nick speaks I start to understand the real meaning behind the flag. It’s got less to do with symbols and more to do with statements. Despite earthquakes and monsoons and the threat of destruction, people choose to live here. This is their country. Their statement. The sun and the moon have shone down on Maoist insurgencies and colonial armies, the birth of constitutional democracy and the primordial stirrings of the Himalayas, but Nepal is still standing. Always.

Peregrine has been visiting Nepal since the very beginning. It holds a special place in our hearts. If you want to give back to the country, the best way really is simple: visit.