The Aurora Borealis is one of the earth’s most incredible phenomena. Standing in a forest hushed with snow as the sky dances in technicolour above you… there’s no other experience like it.

While Europe and North America’s northernmost residents are lucky enough to see the northern lights every year, for most of us, a front-row seat to the celestial pyrotechnics can seem cold, expensive and a long way away. But you know what? While it’s not as cheap as South East Asia, and definitely not as warm, it’s completely worth it. Presenting our guide to the greatest light show on earth.

What are the northern lights?

Auroras are formed when electrically charged solar particles collide with gases in the Earth’s atmosphere. They are best observed in the poles –Aurora Borealis in the north and Aurora Australis in the south – where the magnetic force surrounding the planet is weaker. Scientists have discovered that these light displays, in green, pink, white, red and yellow, often occur at the same time as mirror images of each other.

When is the best time to go?

Plan your visit between September and March, when the nights are clearer and conditions colder. In the depths of winter, these parts of the world see only a couple of hours of muted light a day, if at all. Generally, midnight is the best time to catch a show; the colder the night, the brighter the snow, and the more impressive the lights.

Several variables determine whether the lights will be visible, such as rain, temperature and cloud cover. Aim to spend a decent amount of time there – at least a week or two– to increase your chances of seeing them. Go with an open mind: if you don’t see the aurora, there are so many other wonderful things to see and do. A huge part of the magic of the experience is in heading into the wild ends of the earth, sledding through forests, crossing frozen lakes, visiting active research stations and meeting outlying traditional communities.

Where’s the best place to see them?

The Northern Lights can be seen in many countries in the polar north: Norway, Greenland, Iceland, Swedish and Finnish Lapland, Scotland, Siberia, Canada and Alaska. Generally, the higher the latitude, the better the chance of experiencing the aurora. Although the lights can often be caught flickering over city skylines ­– Reykjavic, Kiruna, even Edinburgh – the further you venture from the bright lights of civilisation, the more impressive the spectacle.

While it’s easy enough to arrange a trip yourself – often you’ll find great views from your hotel balcony (or hot tub!) – joining a group tour offers an even richer experience. The logistics, clothing, equipment and research is organised for you; plus, led by a team of experts, there’s an even greater chance you’ll see the lights.

Here are four of the best destinations to see the Aurora Borealis:

Although the weather can be temperamental, for around eight months of the year you can see the northern lights from almost anywhere in Iceland. Drive 15 minutes out of Reykjavic to Álftanes and visit Bessastadir, the President’s house, for a wonderful view of the lights over the bay. Otherwise, enjoy the show as you soak in the geothermal waters of the famous Blue Lagoon.

Outside Reykjavik, small towns such as Hvolsvollur and Vik are great bases from which to chase the lights, as is Lake Myvatn in the north. In the west, the Snaefellsnes Peninsula features caves, glaciers and a spectacular coastline. That’s the thing about Iceland – even if you get a rough bout of weather and miss the lights, there is so much more to see; the lava fields of Skaftafell National Park, the imposing sea stacks of Reynisdrangar and the Golden Waterfall of Gullfoss are just a few examples. Greenland is not very green at all. In fact, 80% of the island is covered in ice. But look up and you’ll see a night sky shot with rivers of shifting emerald. Locals refer to the northern lights as ‘Arsarnerit’, which translates to ‘playing ball’; according to local Inuit legend, the aurora appears when the souls of the dead are sporting with walrus skulls.

For years, Greenland was out of bounds to everyone but scientists, explorers and the most resilient native communities. These days, however, adventurous travellers are heading to Greenland for whale watching, dogsledding and exploring. Kangerlussuaq, in the west, is in the heart of the aurora belt; you can also catch a pretty decent light show in Nuuk.

The best way to discover Greenland is on an Arctic voyage, which gives you access to great wildlife (including polar bears, arctic foxes and walruses), islands (such as stunning Ella Island), the longest fjord system in the world, Scoresbysund, and remote Inuit communities like Ittoqqortoormiit, the most isolated settlement in the country. 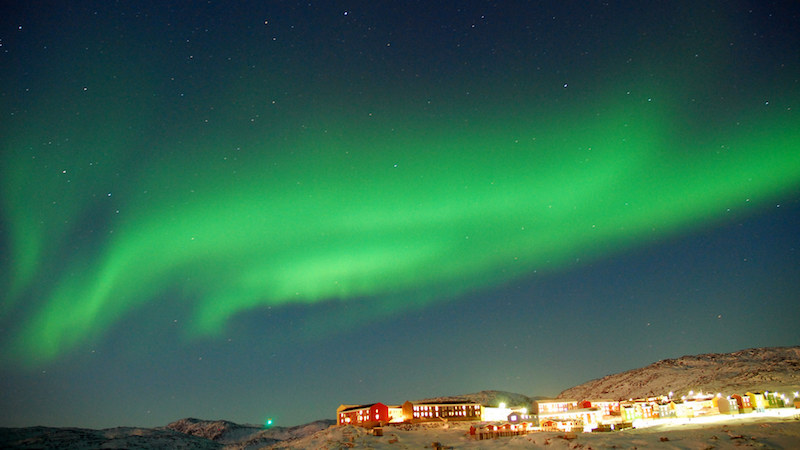 The northern reaches of Canada are covered by the ‘Aurora Oval’, and are home to some spectacular light-viewing opportunities. Head to the Yukon, find a cosy lodge or yurt outside of Whitehorse, soak in the Takhini hot springs, and visit the Northern Lights Space and Science Centre in Watson Lake. Yellowknife, in the Northwest Territories, is another popular destination; Peregrine offers an Arctic Watch experience on Somerset Island, just off the coast. AuroraMAX, an educational project, broadcasts local northern light activity online.

Other provinces to consider include Alberta, Northern Saskatchewan, Newfoundland, British Columbia, Ontario and Nova Scotia. Combine your aurora-chasing with unique activities such as dogsledding, cross-country skiing, whale-watching or snowmobiling, and you’ve got yourself an unforgettable experience.

Norway’s aurora belt stretches from the Lofoten Islands to the North Cape and beyond. A popular destination is the town of Tromso, within the Arctic Circle. Hammerfest, Tana Bru, Vardo and Alta in Norwegian Lapland also have great light-viewing potential.

One of the best places in Europe to see the lights is Svalbard, an archipelago between mainland Norway and the North Pole. The largest and only populated island is Spitsbergen, which is rich with wildlife-viewing opportunities and a great launching point for a voyage through the region’s breathtaking fjords. Svalbard is famous for its ‘polar night’ – a phenomenon of no sunlight between November and January. From Oslo, you can fly directly into to the island’s capital of Longyearbyan. 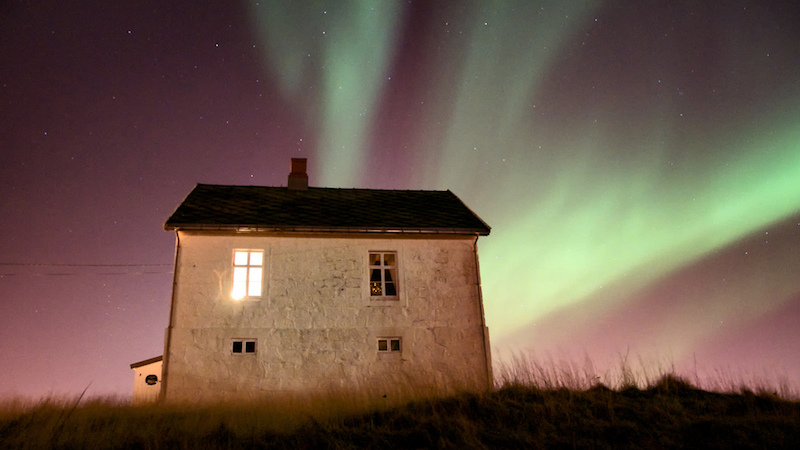 There’s nothing like experiencing the Aurora Borealis for yourself. You can do just that on an Arctic Northern Lights Peregrine adventure.