I glance around at my fellow Adventure Cruisers as we wait for the Zodiacs to take us to shore from our small ship, the Panorama II. Over the past few days, we’ve become accustomed to hopping into the Zodiacs clad in our bathing suits, slathered in sunscreen, ready for a day on the beach. We’ve been enjoying the assortment of white, sandy beaches and uninhabited islands on Peregrine’s 8-day Indonesian Island Cruise.

But this morning, the atmosphere is quite different. The air is thick with anticipation – perhaps a little bit of apprehension too – because today’s the day that we get to walk among the Komodo Dragons on Rinca Island. Peregrine chooses to visit Rinca Island rather than her more touristed neighbour, Komodo, as there are less crowds to contend with and, as travellers, we can help lessen the impact of overtourism that the most well-known island in the UNESCO-listed National Park is currently experiencing.

Komodo Dragons look like something you might see in a dinosaur film, or at the very least in a natural history museum. Looking at these lizards, it’s easy to appreciate why they’ve have survived millions of years of evolution and were originally mistaken for some sort of land crocodile. They are big, tough and pretty scary looking, in my opinion. Thankfully, we were in good hands. Our local guide, Rahman, tells me he has been working as a ranger in Komodo National Park for the past ten years. Rahman says his name means ‘peace’ in Arabic, and his calming presence (and large forked stick) is certainly appreciated by me as we approach the scaly giants that can weigh up to 70 kilograms each.

The process of becoming a ranger in Komodo National Park isn’t easy. For a start, rangers must learn fluent English, then come to one of the islands (Komodo, Rinca or Flores) and train for three months under the guidance of the senior rangers. Not only do you have to learn how to control the dragons and keep visitors to the islands safe, but you also need to learn all about the other flora and fauna found across the National Park, so you can share the knowledge with the tens of thousands of visitors each year.

Almost immediately after walking from the dock to the main entrance of the park and meeting the rangers, we can see multiple dragons meandering around. We all ‘ooh’ and ‘ahh’ and reach for our cameras as Rahman leads us in a slow walk up the path and starts to tell us more about these fantastic beasts.

“Once the dragons reach the age of seven, you can tell males and females apart in a few ways,” he explains as one of the larger dragons lumbers towards us and flicks his tongue menacingly. Rahman places his long, forked sticked on the ground in front of the dragon as a warning and it stops in its tracks.

“The males have a bigger, rounder head and longer tail than the females, and can grow up to three metres long. Some fossils have been found in Australia that share DNA with Komodo Dragons that are up to seven metres long, so we know these are prehistoric creatures who have been around since the dinosaurs.”

One of the dragons, approaching our group.

Rahman says that back in 1994, rangers on the islands stopped providing the Komodo Dragons with food, as they had become lazy and would follow people rather than hunting naturally. Generally speaking, the carnivorous dragons only eat once a month, but when they eat, they eat big.

SIGN UP FOR PEREGRINE’S FREE E-NEWSLETTER FOR TRAVEL DEALS, INSPIRATION AND MORE

“See that buffalo over there?” Rahman points to a huge, black animal, staring at us dolefully from among the lush greenery.

“A dragon will bite one of them on the back of the leg, and the bacteria and venom from their mouths will take two to three weeks to finally kill the buffalo. Then all the dragons will come and feed on it together because it’s so big. That’s why their poo is white, because they eat the bones and all of their prey.” 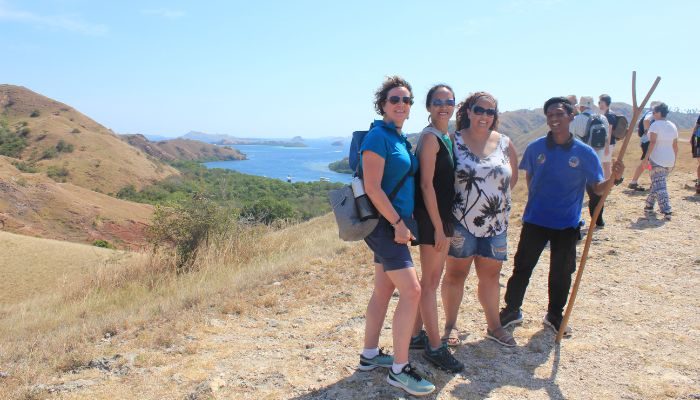 The views from Rinca Island are almost as spectacular as the Komodo Dragons themselves.

At the time of our visit to Rinca Island, it’s the height of mating season for the dragons. Rahman unabashedly, and in great detail, describes the mating patterns of this highly unusual species.

“Each mating session takes about four hours. The males have two penises, so if they get tired they will switch from one to the other. They may perform three sessions a day during mating season. The males want to mate all year round, but the females will only respond to them in June or July,” says Rahman, ignoring the predictable joking from our group, in particular a few of the married couples among us.

“Females lay between 15 and 30 eggs at a time,” he continues, “and the females only live to about 35 years-old, as opposed to 50 like the males, because they are tired from laying eggs and preparing nests,” finishes Rahman, as we watch a male Komodo make a move towards an already clearly pregnant female. 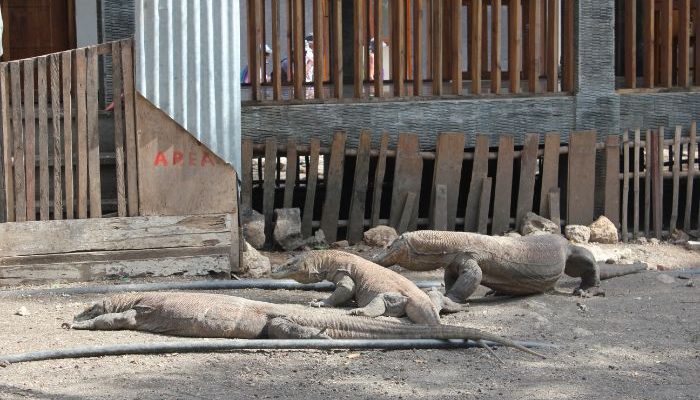 The male and female dragons mingling.

When the female Komodo Dragons lay their eggs, they bury them and leave them to incubate for eight months. They only stay with the nest for the first three months of incubation before seeking shelter from the rainy season and muddy conditions that ensue. Cleverly, the dragons dig many nests, each about two metres deep and wide but only leave eggs in one of them in an effort to confuse predators. The baby dragons are between 25 and 30 centimetres long when they hatch and will immediately seek shelter from potential danger in a tree, where they will live for the first three to four years of their lives.

RELATED: HOW I OVERCAME MY FEARS ABOUT JOINING AN ADVENTURE CRUISE AS A SOLO FEMALE TRAVELLER

After a couple of hours exploration and many, many dragon sightings, we bid Rahman goodbye and head back towards the dock, excitedly recapping what we’d seen. If I am being entirely honest, the main topic of discussion was our bemusement at the thought of this fearsome reptile having two penises… but in reality, with only 6,000 Komodo Dragons left in the wild, it was a privilege to be in the presence of these protected, prehistoric creatures.

Do you want to walk among the Komodo Dragons? Book your place on Peregrine’s 8-day Indonesian Island Cruise.

All images by Amy Foyster.