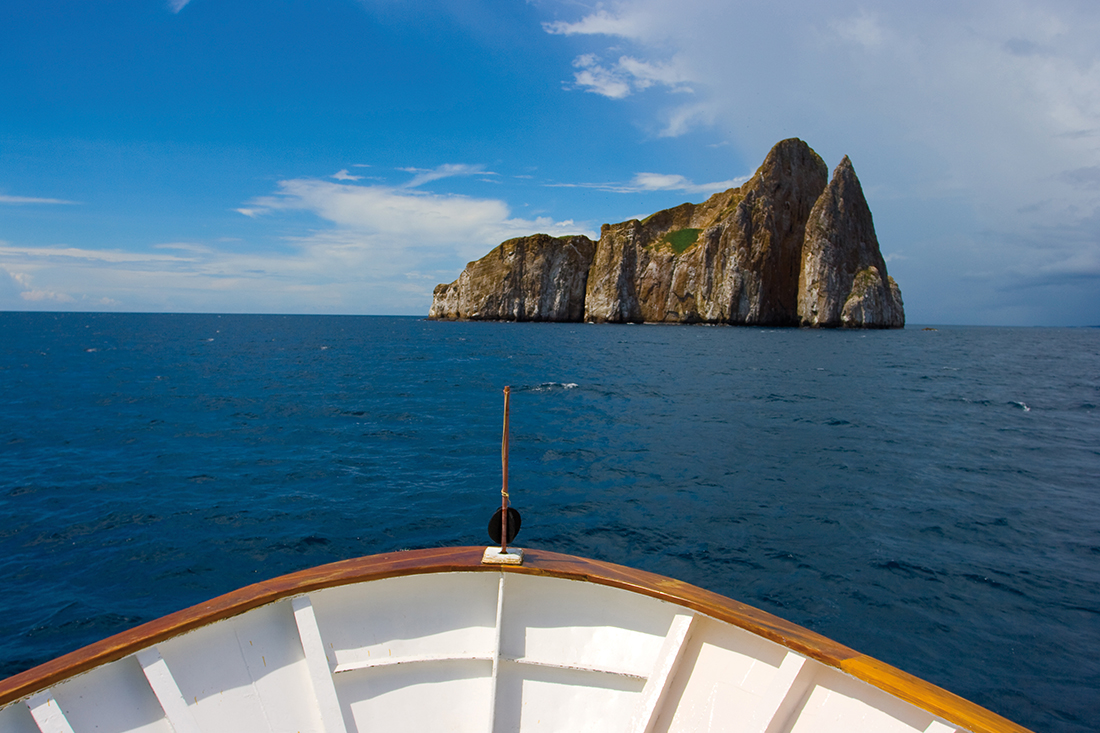 The Galapagos Islands are one of the most remarkable windows to evolution we have on this planet. They’re synonymous with unique wildlife; when we think of the Galapagos we think of giant tortoises, colourful seabirds, or perhaps sea lions sunning themselves on rocks.

But the wildlife is only one aspect of this extraordinary archipelago. The following list of must-experience Galapagos highlights, free of eyes and central nervous systems, proves the Galapagos is a place not just for wildlife lovers but for all kinds of travellers. 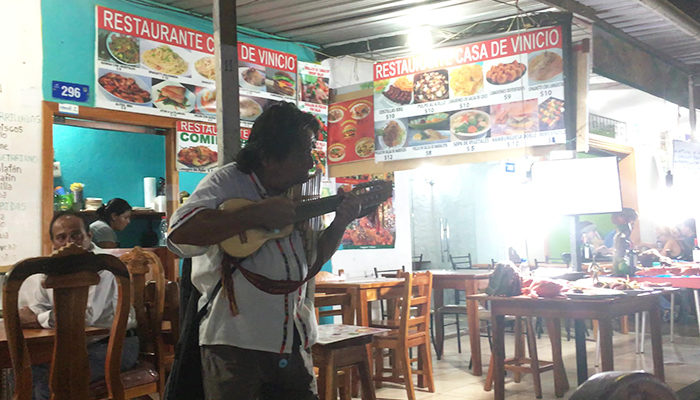 A street performer at the night market. Image by Mark Hewitt

First things first –  what to eat? It may be that you’re exploring the Galapagos Islands on a cruise, which means most of your meals will already be taken care of. But you’ll no doubt pass through Puerto Ayora while you’re in the Galapagos, and its nightly street market is the place to go for dinner. Seafood is naturally a major feature here, especially shrimp and lobster, both of which are fresh, delicious and inexpensive. There’s a lot of overlap between the different merchants’ offerings, but a quick walk up and down the main strip should give you an idea of what’s what. It’s also a great chance to mingle with the friendly locals.

READ MORE: EATING YOUR WAY THROUGH THE GALAPAGOS ISLANDS

More than a mere novelty, the old post box on Isla Floreana shows that sometimes there’s no substitute for doing things the old-fashioned way. The historic post box still functions manually, allowing travellers to post a letter home via a sort of people’s system. As well as posting your own letter or postcard, you first check what’s inside the box in case there’s anything you or a friend can hand deliver when you get back home – travellers often find an address or two in their neck of the woods. This system has led to strangers sharing cups of tea and reminiscing over the Galapagos, and, amazingly, has been known in some cases to be faster than posting an international letter from Quito.

Boasting five volcanoes, Isla Isabela is one of the geological standouts of the Galapagos Islands. It’s the largest of all the islands, and was itself formed by volcanic activity. It’s also one of the youngest geological zones on the planet, at less than one million years old. Las Tintoreras is a must-visit spot on Isabela, not just for the abundance of marine iguanas but the chance to walk across lava flows. Those with the time can take a day-hike on the Sierra Negra volcano, but bear in mind it erupted in July 2018, so keep an eye on local reports just in case anything’s brewing.

EXPLORE THE GALAPAGOS ON A SMALL-SHIP ADVENTURE CRUISE WITH PEREGRINE 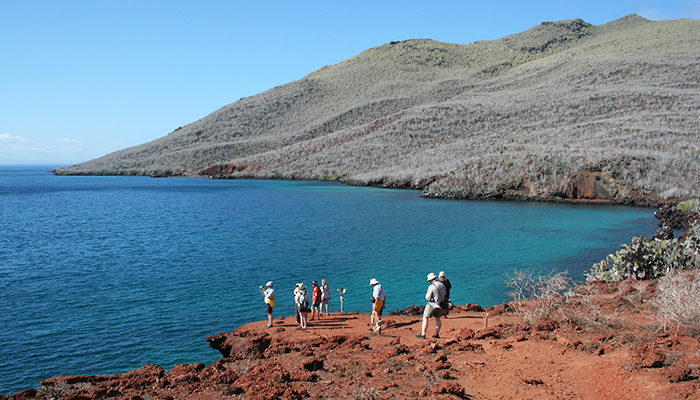 The diversity of beaches in the Galapagos makes it impossible to name a favourite, but for a classic white sandy shore on a sunny day, Bahia Gardener is a winner. Las Bachas, too, is a beautiful beach and has an interesting history, taking its name from the WWII barges that were abandoned and left there by American soldiers. For something different, head over to Isla Santiago to see the rich red shorelines of Playa Espumilla and nearby Isla Rabida. Isla Santagio also boasts Buccaneer Cove, a geologically and historically fascinating spot with cliffs that lend it a certain atmosphere.

Doubling as a retraining ground for baby tortoises, the Charles Darwin Research Centre is a place to make sense of the Galapagos Islands. It’s best to visit with a local naturalist who can go into detail on things such as local vegetation, the history of the Galapagos National Park as a conservation initiative, and the surprisingly dramatic history of Charles Darwin’s famous research (which came under question for its similarity to that of Robert Alfred Wallace). It’s an absolute must for any trip to the Galapagos, a place to get important context and background information. 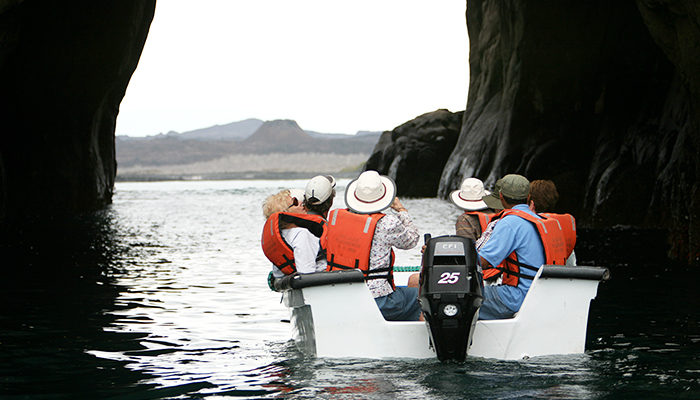 Rock oddities are found all over the Galapagos Islands, but Leon Dormido is perhaps the most striking. It’s an old lava cone that’s been split in two and sticks out of the ocean just a couple of hours away from Isla San Cristobal. Its monolithic, mysterious quality – not unlike the karst formations of Thailand or Vietnam – makes one question just what Mother Nature is up to and why. A photo at sunrise or sunset is great; a boat trip through the middle of the two rocks it’s made up of is even better. And the snorkelling is fantastic. 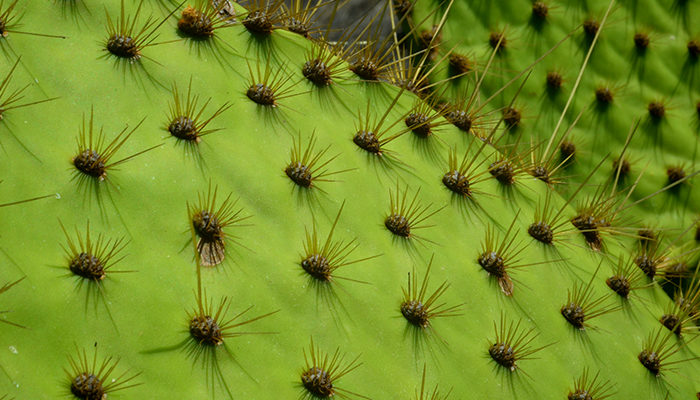 There’s much to appreciate about the Galapagos’ different vegetation zones, from the salt-resistant mangroves around the water to the scalesia forests of the Santa Cruz highlands (scalesia is known as ‘Galapagos broccoli’, though it’s far from edible). But one of the most interesting aspects of Galapagos vegetation is how desert-like it can be, despite the fact the Galapagos is about as far from a desert as one can get. Don’t leave without dropping anchor on Isla Santa Fe, where the endemic opuntia cacti come as high as ten metres and make for a photogenic, albeit slightly incongruous, scene. They’re easily accessible via a short walking trail.