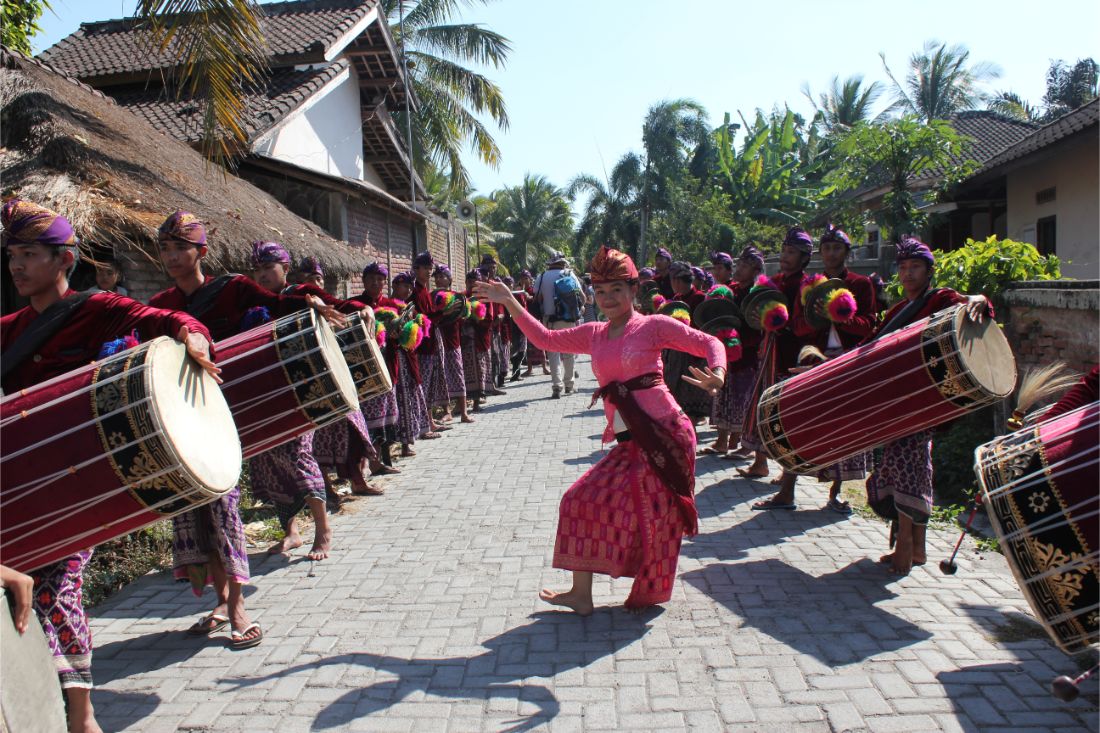 With a population of over 3.1 million on an island only 4725km² in size, you might expect Lombok to be similar to its Balinese neighbour. But I can assure you, it’s not.

Beautiful Bali, for all her picturesque beaches and trendy cafes, has an entirely different feel to Lombok. When you visit Lombok, there’s a magic in the air… it’s like stepping back to a less touristy and simpler time.

It was the penultimate day of our 8-day Adventure Cruise around the islands of Indonesia. We’d been to many different islands already and spent plenty of time relaxing on uninhabited beaches, swimming in a volcanic crater lake, spotting Komodo dragons and even hiking to a hidden waterfall. But today, we were going to be spending time with some local villagers on the island of Lombok. 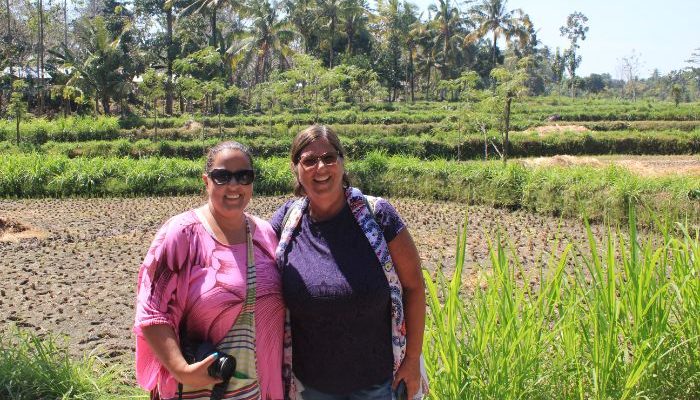 BOOK YOUR PLACE ON OUR 8-DAY INDONESIAN ISLAND CRUISE

It was about an hour and a half in the bus from the port to Bonjeruk Village and so, with a captive audience and a microphone in hand, our Peregrine leader (and Lombok local), Levi, was in his element.

“There’s magic in the air on Lombok,” Levi tells us, as the bus winds around the coastal road, overlooking palm trees, beaches and the turquoise Bali Sea.

“No, seriously!” our other leader Yan protests, grinning at our chuckles and sceptical expressions.

SIGN UP FOR PEREGRINE’S FREE E-NEWSLETTER FOR TRAVEL DEALS, INSPIRATION AND MORE

A place like Lombok – that’s brimming with rich history, breathtaking landscapes and a unique cultural heritage found nowhere else in Indonesia – is probably as good a place as any to witness real life magic. Levi was quick to share all sorts of stories about magical winds, water and his Grandfather who was famous throughout his village for possessing an array of otherworldly powers. I’ll admit, while I loved listening to him recount the stories he’d grown up with, I wasn’t exactly convinced.

But, as cliché as it sounds, when we arrived at Bonjeruk Village, there really was a certain magic in the air. It might not have been the supernatural miracles that Levi had been telling us about, but it was immediately obvious there was something special about this community.

READ MORE: HOW I OVERCAME MY FEARS ABOUT JOINING AN ADVENTURE CRUISE AS A SOLO TRAVELLER

As we hopped off the bus, we were greeted by a group of local villagers, who poured us each a small glass of a spicy, ginger tea before leading us along a winding path through the rice paddies. In Bonjeruk, all the villagers have different trades – some harvesting coffee, others rice, looking after livestock or even traditional weaving. Friendly and excited to show us their trades, the villagers chatted with us as we walked, sharing information and asking questions about where we were from too. 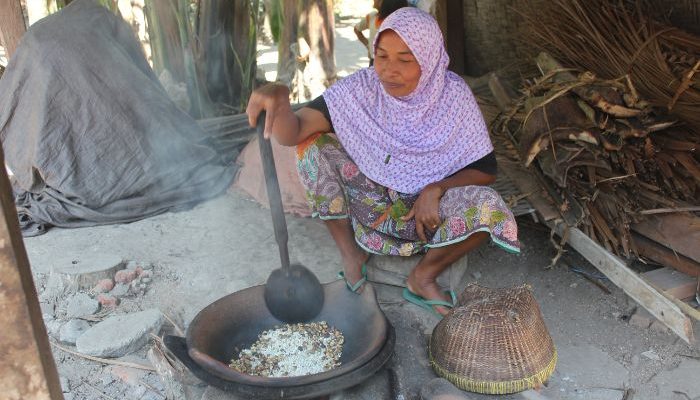 To the backdrop of the midday call to prayer from the village’s mosque, we arrived at our first stop. One man and two women were taking it in turns to grind freshly harvested coffee beans in a large wooden barrel before passing them over to a woman who sat roasting them in a large pan over a smoky fire. Another man was scooping the fresh grounds straight out of the pan and putting them into a coffee plunger to pour shot glasses of the hot, black coffee for our group.

After tasting the grainy, delicious coffee and having a turn of grinding the beans ourselves, we continued our walk past the native fruit trees and village dogs roaming up the dirt roads, to a communal courtyard surrounded by gardens and a few small, stone houses. We were met by two local women cooking up assorted rice snacks on a portable stove and some men who were eagerly passing the snacks round for us to sample, keen for a chat about where we were from and how we were enjoying our stay in Indonesia. Only a few metres away, another woman sat serenely on her patio, deftly weaving a wicker mat. Snacks in hand, we swarmed around to get a better look, and before long were joined by a gaggle of children who all broke into song, performing just like a school choir. 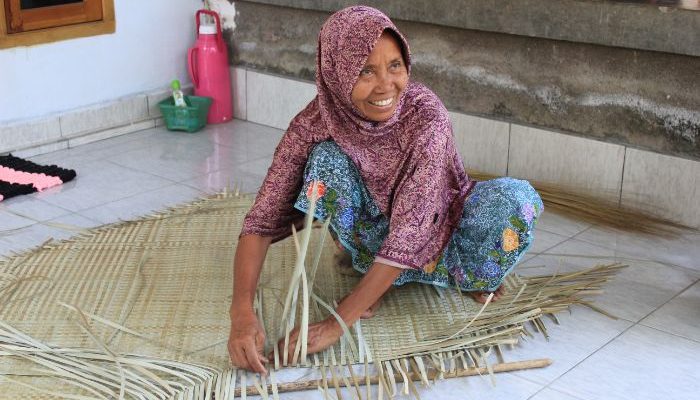 After much applause and many thank you’s we continued our stroll through the rice paddies to our final destination – lunch. Levi and Yan had told us we’d be enjoying a ‘simple, traditional’ picnic among the paddies, so I had pictured sitting on the ground, sharing the Indonesian equivalent of a ham and cheese sandwich – maybe some sort of basic rice dish? I wasn’t prepared for the spread that awaited us; a buffet of chicken curries, vegetable curry, rice dishes, stir-fried greens, fried tofu and fresh fruit were laid out on a long table next to a pergola. Beneath the pergola were tables, with chairs decorated as though for a wedding. And truly, you could have hosted a wedding here – the view of the lush rice paddies, set in front of the tropical palms was as pretty a setting as you could ever imagine. 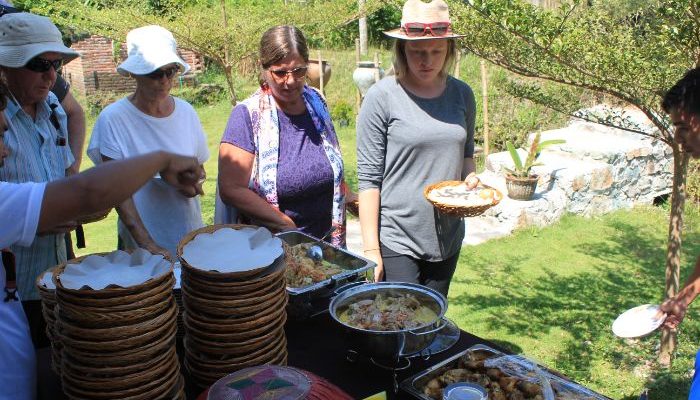 Bellies and hearts full, we finished the meal with a talk from Levi, Yan and one of the villagers who explained the positive impact that the visits from Peregrine travellers, such as ourselves, have on the people of Bonjeruk Village. They told us that our visit created jobs for many of the locals, from the ones who escorted us around for the morning, to those who demonstrated the different trades and crafts, through to the team of cooks who prepared the amazing lunch we’d just enjoyed. This meant the village could put the money we’d spent towards better schools and infrastructure, allowing more young people to stay in the village, rather than having to go to the bigger islands or cities to find work.

And for us? It was a privilege to meet some of these friendly Sasak people and learn about a way of life, vastly different from the way most of us live at home. As we made our way back to port that evening and I reflected on the openness of the people and beauty of the day’s experiences, I kind of knew what Levi meant about their being magic in the air.

Do you want to experience the magic of Lombok yourself? Book your place on our Indonesian Island Cruise.