When a Minke whale surfaces within 15 metres of your kayak, you need to be ready. Not only with camera in hand (although that certainly would be handy), not only with paddle at the ready to back out of the Minke’s way (although that would be prudent) – what you really need to be ready for is the breath-stealing, gob-smacking awe of coming face to face with such power and grace.

I was lucky enough to have my camera already in hand as the Minke surfaced, and I have watched those 45 seconds over and over again. Every time I replay the footage, my breath just catches in disbelief at the freakish good luck of such a close encounter.

We spotted our Minke on the fourth day of kayaking, during our Peregrine Antarctic expedition. Even before spotting the Minke, kayaking in Antarctica had provided me with enough staggering vision to surpass anything I’d seen on any previous trek, hike, tour or holiday. I am 62 years old, and have been a regular traveller since I discovered the joy of leaving home shores at the age of 19. But I have never seen anything like the starkly beautiful Antarctic Peninsula, and its surrounding islands. 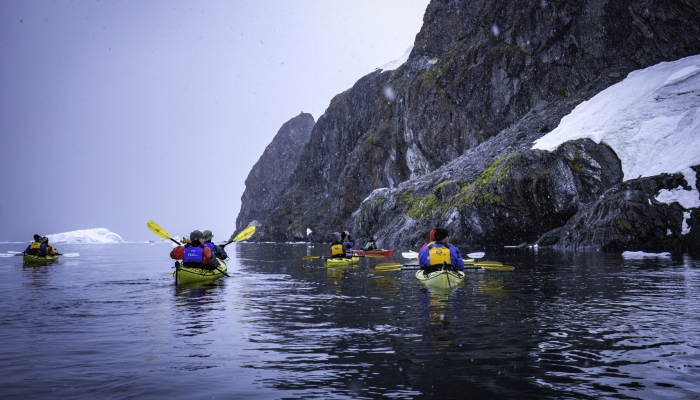 Snow falls as the group explores the Antarctic coastline. 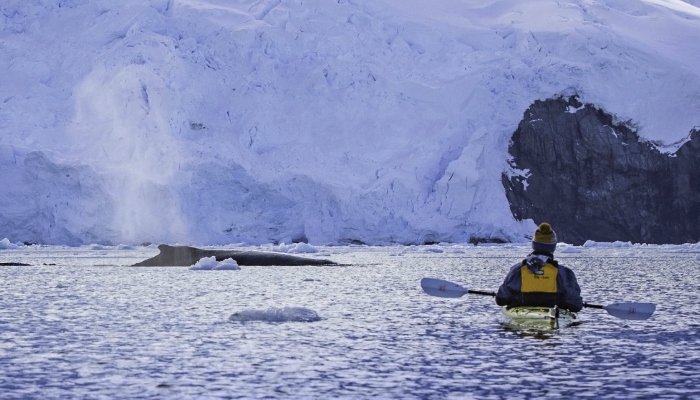 A kayaker watches a whale surface close by.

Kayaking, we could get up close and personal with a variety of seals, penguins and sea-birds. Many of the seals were playful and inquisitive and seemed to take quite a delight in sliding, rolling, diving around us, some even daring to snort in our general direction (apologies to John Cleese!)

There was an air of tranquillity, of unearthly silence, on those occasions when we stopped our paddling miles away from the mother ship and the motorised Zodiacs and simply listened to the silence. Only, of course, it wasn’t really silent at all. The lapping of the sea water against an iceberg, the clinking of chunks in an ice floe, the current twisted them into pseudo riverways flowing with the prevailing current, the squawk of gulls and terns, the gentle plop, plop, plop of a raft of penguins single-mindedly “porpoising” their way back to shore, completely unconcerned with us, and, on several occasions, the muted thunder of an avalanche or a glacier calving. 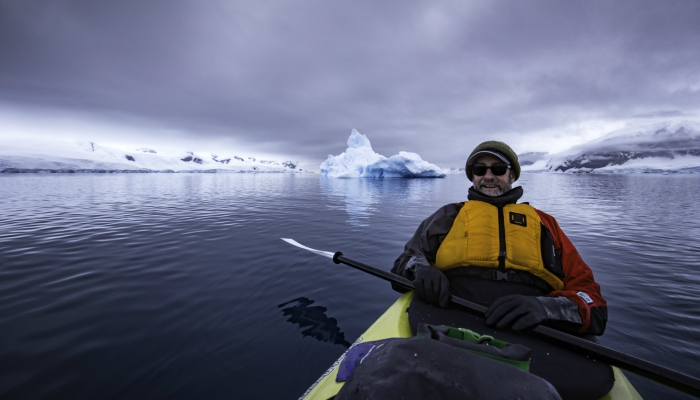 The author cracks a smile (kayaking among icebergs in Antarctica will make you do that).

At other times, we felt the intrinsic pleasure that comes with absorbing oneself in any  rhythmic physical activity as we paddled, paddled, paddled, paddled our way around some rocky shore, shared with penguins and seals who somehow knew whose patch was whose; or beneath towering cliffs that rose sheer out of the ocean, in front of glacier after glacier, or past icebergs of the most unbelievable hues of turquoise, electric blue and emerald green. The crackle and crunch of our paddles as we forged our way through a resistant ice floe. 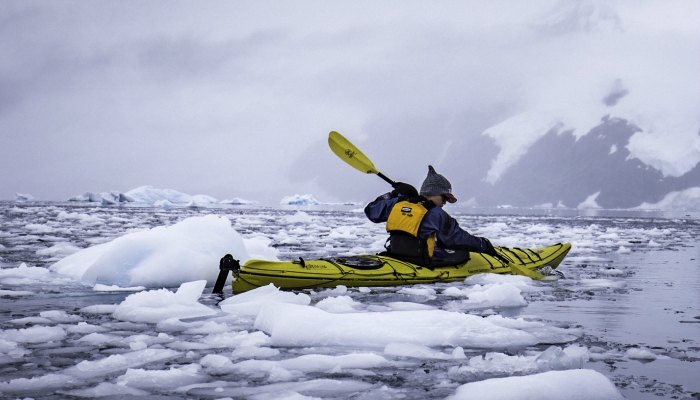 There was also the sense of camaraderie that envelopes a small sub-group engaged in the same activity, away from the rest of the boat. We were the privileged few. We became a community within a community for the eleven days of our trip. It’s one of the lingering joys from the whole adventure, the connections I made among the group.

We were amused by each other’s capacities and idiosyncrasies – like the powerhouse paddler who was as unstoppable as the Duracell rabbit, the semi-professional photographer who knew a good shot when he saw one, the older amateur photographer (which might or might not have been me) whose stop-start-wait-start-again antics kept him always at the rear of the flotilla, the go-pro fanatic whose mantra of “Go-Pro, take a picture” was a constant of the trip, the married couple who delighted in everything they saw and did, the Aussie bloke who ran a dry and unmissable commentary as we paddled along, and the two guides who were our part-parents, part-teachers, part-security guards. 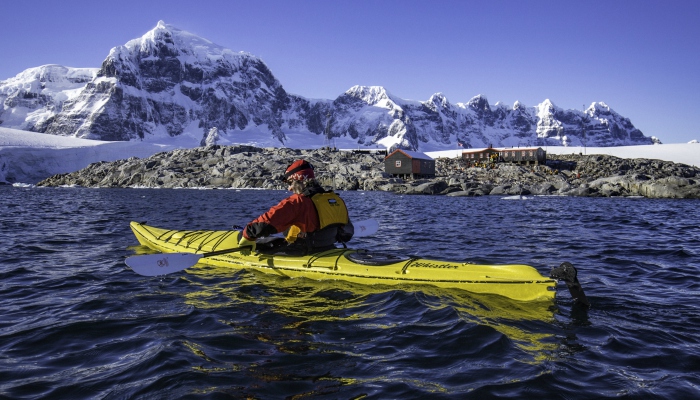 Kayaking past Port Lockroy – Base A, an old British research facility. It contains a museum and a post office. 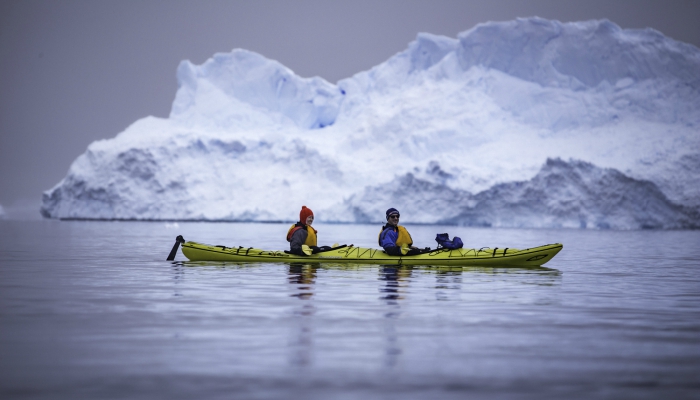 As it turned out, we needed the multi-faceted approach of the guides. During the last of our eight Antarctic kayaking sessions, our group was “buzzed” by a persistent and undeterred leopard seal. We had seen many leopard seals over the previous sessions, mostly resting on icebergs, occasionally yawning and stretching. But this afternoon as we circumnavigated Half Moon Island, we became something more than a passing interest for this particular leopard seal. He came within a few feet of individual kayakers several times, each time eye-balling the kayaker with teeth bared. In one instance, he even tried to mount the front of one of the kayaks. 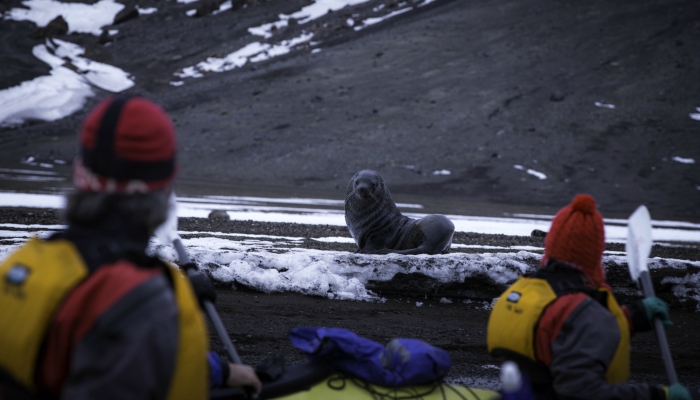 A fur seal poses for the camera.

Our guides, Sharon and Keith, saw the potential danger early and had us form together as a kind of loose raft. There was insufficient room for the leopard seal to come between us, but enough for each kayaker to continue paddling firmly and purposefully to get us out of the danger zone. Sharon and Keith became whatever the kayaking version of a sheep-dog is, rounding us up and keeping us moving inexorably to our only “beaching” for the trip. (All the other kayaking sessions had ended with a transfer, one at a time, from the kayaks to a waiting Zodiac.)

It was an exciting way to conclude a magnificent eight sessions of kayaking, and it definitely provided a talking point around the dinner tables that evening. But still, that Minke whale…

All photos by Liam Neal.

Sea kayaking is an optional activity on most Peregrine Antarctic voyages. Venture to the White Continent with Peregrine and you too could get up close and personal with incredible wildlife.

Trekking, hiking, walking & wilderness enthusiast. Prolific amateur photographer. Father. Grandfather. Camino and Antarctica are highlights of my recent adventures. When I’m not out experiencing the wild diversity of the world, or playing my part as an education leader, I’m happily trolling travel blogs - Monty Python and Game of Thrones references anyone? Forgive me, but Moody Blues songs are the soundtrack to my life.