Spice of life: The top 5 dishes to try in Morocco 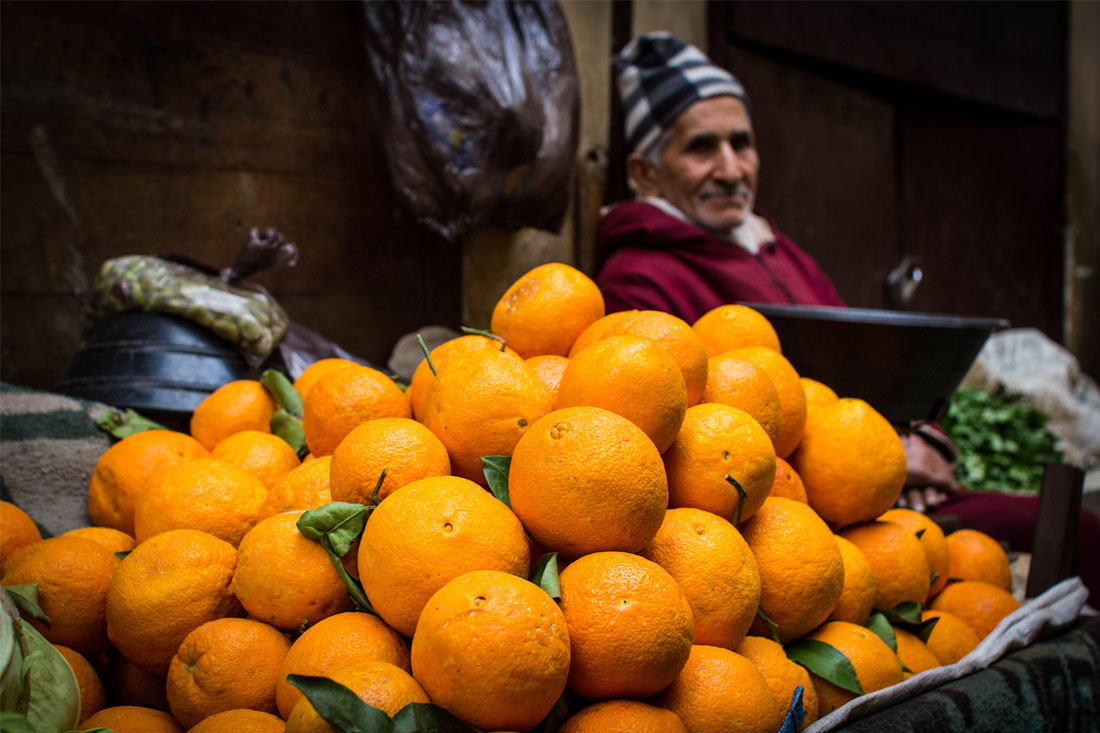 The scent of cinnamon, cumin and coriander hangs heavy in the air, tagines bubble and steam at crowded cafes, and pot after pot of mint tea is poured for locals and travellers alike into delicate painted glasses. Unfamiliar aromas are everywhere, as are the often-jarring sights of whole sheep’s heads, camel innards, and pots piled high with snails. So what’s the best way to navigate the hits (and misses) of Moroccan cuisine? With us on a Gourmet Explorer food tour. If you imagine a cross between a French crepe and an Indian roti (which sounds like the beginning of a bad joke…), you’ve almost got a msemen, otherwise known as a Moroccan pancake. A simple dough of flour, semolina, sugar, salt, yeast and water is kneaded together, then stretched, folded and flattened into squares. After being gently fried on a hot griddle, these flaky-on-the-outside, chewy-on-the-inside flatbreads are best enjoyed straight away, either drizzled with a sweet honey syrup or gobbled as is. 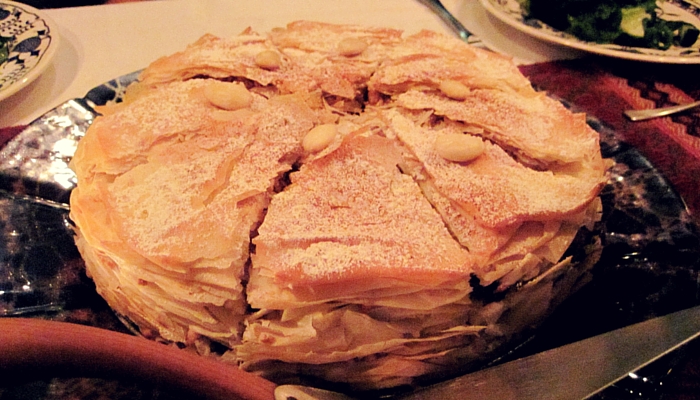 While in Fes, keep your eyes peeled for the city’s signature dish: the traditional b’stilla (you’re unlikely to see b’stilla this good in other parts of Morocco). This is one of the few times you’ll actually enjoy the pairing of sugar and meat in a pie. Delicate pigeon meat (sometimes chicken is substituted), which has been slow-cooked in a fragrant, salty broth, is shredded and assembled in a dish between layers of flaky pastry, beaten eggs, cinnamon and almonds. After it’s baked, icing sugar is dusted over the top before serving. Typically, this special pie is dished up as an entrée to a celebratory meal with family or friends. B’stilla, my beating heart.

For lunch, tuck into a Seven Vegetable Couscous (especially on Friday) Couscous is, undoubtedly, the quintessential dish of Morocco. Why is it eaten more on Fridays? Two reasons: it’s usually only prepared for special occasions, such as weddings, funerals or at the end of festivals, and it takes a really long time to cook. Seven vegetable couscous is one of the tastiest ways to enjoy the small semolina grain; an array of seasonal vegetables, such as squash, zucchini, onion and potato are simmered in tomato, stock, herbs and spices. The couscous is added towards the end of the cooking time, steaming in the delicate broth. The end result is a simple, wholesome meal, best enjoyed with a glass of Lban (cultured buttermilk) and shared with a group of hungry foodies.

For a pre-dinner snack, try Snails 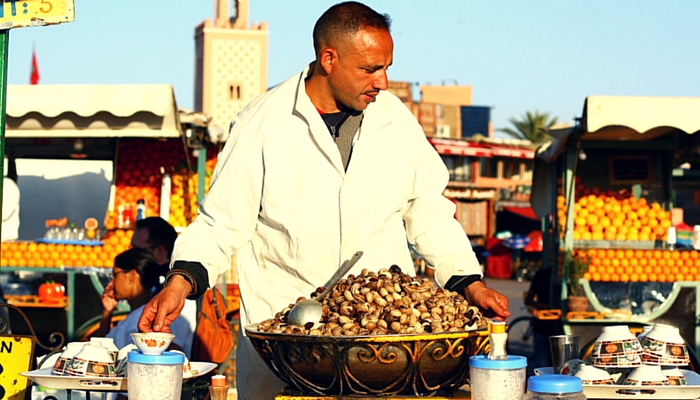 A recent conversation with Peregrine Food Product Manager Erika Kritikides confirmed that, contrary to popular belief, snails are delicious. A street-stall staple throughout Morocco, some of the best snails can be found in Marrakech’s Djemaa el Fna marketplace. Huge pots, piled high with snails simmering in a fragrant broth, adorn carts lining the square (just look for the queues – snails are always in high demand in the medina). Upon ordering, the snails are spooned into a cup, stock ladled over the top, and you’re given a toothpick as your snail-eating implement. Sit down on one of the provided stools, spear the meat out of the shells with your toothpick and munch, munch, munch. Afterwards, drink the salty broth, said to contain healing properties. Don’t knock it till you try it! Another must-eat from Djemaa el Fna, this is one of the most delicious ways to enjoy lamb ever (step aside Greek-style roasts and Indian curries). Traditionally, the whole beast is used, including the organs (guests of honour will usually be served eyes or kidneys as a show of respect). Slow cooking for hours in an underground pit creates a crispy outer coating, while the meat itself is fall-apart tender, juicy, and moreish. Served with bread, eaten with hands.

Hungry? Join a Gourmet Explorer food tour of Morocco to sample some of the finest local flavours in the country.