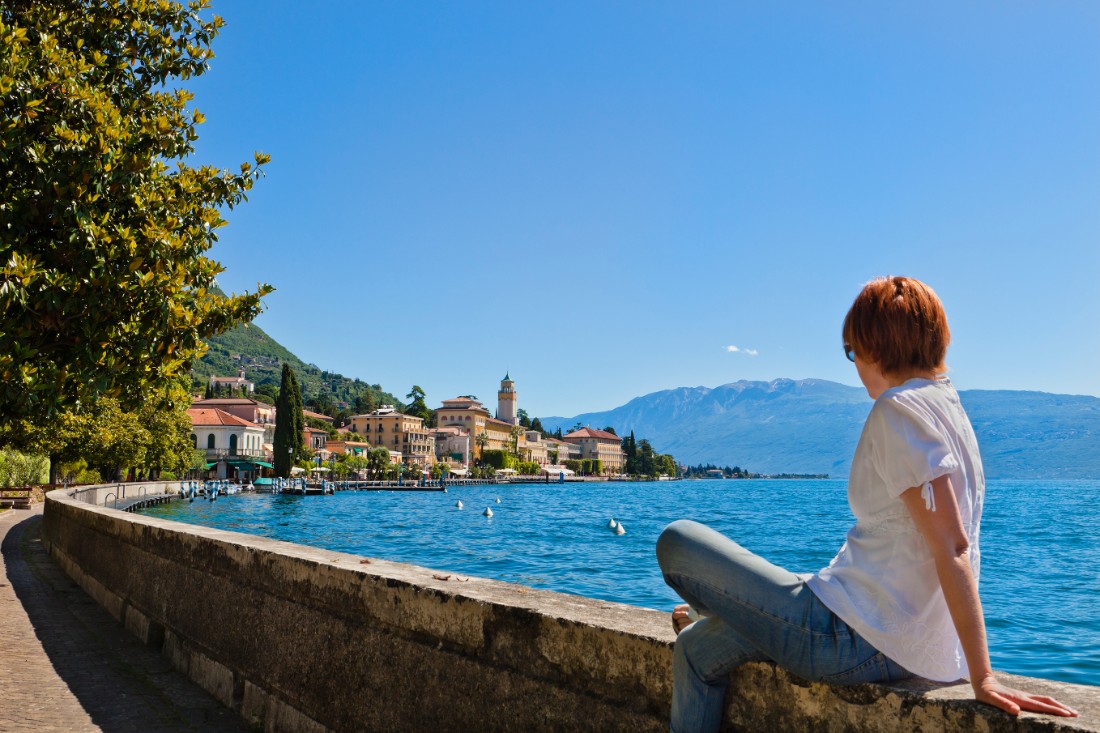 Experience in life and love tells me that when you’ve lusted after something for a long time it rarely lives up to its promise. Which is why I was slightly trepidatious about going to Lake Como, one of the fabled lakes of northern Italy.

Friends in whom I confided my fears about the trip couldn’t believe what they were hearing. But why? You’ve rabbited on forever about going there, they’d say. I don’t want to be disappointed, I’d wail. Can anything be that beautiful and be real…besides George Clooney, Como’s most famous resident.

I need not have worried. Como and, indeed, the entire Italian lakes region is one of those places on this planet where the reality outguns the hype.

All it took was one look at the deep glacial Lake Como set as it is against an imposing backdrop of verdant mountains and my fears were allayed. I was hooked. We’re talking head-over-heels territory. 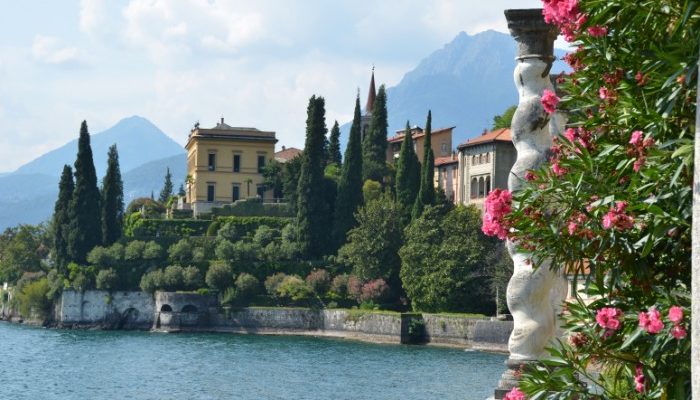 The beauty of Lake Como. Image via iStock.

And it just got better the further we travelled with Peregrine Adventures Italian Lakes Discovery trip. The pleasures of nature and man-made beauty that established the Italian lakes as a fixture on the Grand Tour in the 17th century are what still enchant and draw today’s tourists. Villages, some world-famous for their sophistication, others quaint and beloved by locals, elegant villas and grand hotels, elaborate gardens and manicured parklands set in a landscape of lakes, mountains, woods and wilderness. In short, nature at its finest, with men and plenty of women doing their darndest to do it justice.

Even dear old Mother Nature was in on the plan to deliver me the perfect trip. For the entire eight days of the trip the weather was mild and sunny. When it threatened to get a tad warm, a cooling breeze from the lakes sorted that. According to Roberta, Peregrine’s energetic and enthusiastic guide, the Italian lakes boast a microclimate which out-Mediterraneans the Med.

But still, I was worried the morning our group hiked up Mount Grona in order get a birds-eye view of Lake Como. A thick bank of clouds accompanied us all the way. Sure, it kept the temperature down, which was much appreciated. You don’t want it hot when the hiking is hard. But we were all lusting for the famed view of the three-legged lago. Again, I need not have worried. Right on cue as we reached the Refugio Menaggio, the clouds parted to reveal Lake Como below us in all its glory. Spectacular and unforgettable.

So, too, was the ferry ride that delivered us unto Bellagio, where the three legs of the lake meet. With its grand hotels and elegant villas, Bellagio is inevitably described as the pearl of the lake and it is indeed a gem. My first sighting of it as the ferry slid into the small harbour is something I will always treasure.

For most part, ferries were our main method of transport. They are also the preferred form of transport for locals going about their lives and business. The narrow single lane roads that are the norm around the lakes can get congested, especially in Laglio on Como, where George’s Villa Oleandra is situated.

Bellagio is the busiest of the lake towns in terms of tourist numbers. I did have to do a bit of sidestepping around other tourists as I explored its narrow streets, but it was worth it. That particular day was top and tailed with visits to a couple of the Como’s glorious open gardens. We’re talking world-class, jaw-dropping beauty. My favourite was Villa Carlotta, a romantic Italian garden with dramatic terracing and massed banks of rhododendrons and azaleas.

Como’s star power sucks up a lot of the oxygen when any discussion (like this) of the world’s beauty spots is raised. (BTW: Talking of beauty, George is not the only megastar to own a property on the banks of Lake Como. Richard Branson is another. Donatella Versace and Madonna are some of the others that reputedly have resided there). But Garda, the other lake we stayed on during the Peregrine trip, has an unforgettable beauty as well.

Italy’s largest lake, Garda is more than 50 km long, which means nature and space dominate and it has a wilder more untamed feel than Como. It is also a favourite with Italian families. 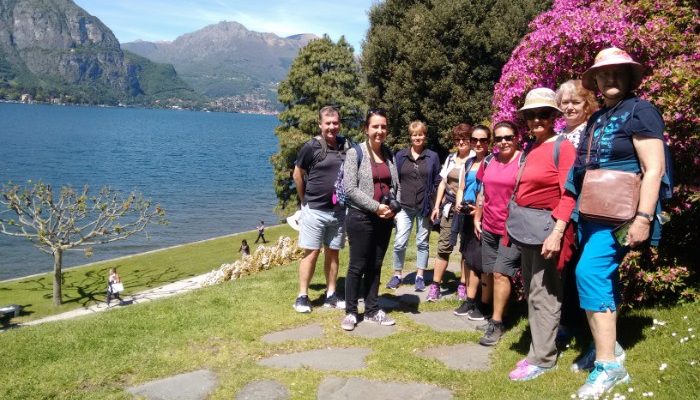 The group at Garda. Image by Cara Brown.

Campervans and castles exist side by side on Garda’s shores and the water is dotted with windsurfers and boats, especially at the northern end of the lake that attracts strong consistent winds much prized by those who love water sports. There’s action aplenty on the sandy shoreline beaches too. The mere sighting of a round ball draws together groups of children and adults for a relaxed kickabout.

Our base in the medieval town of Riva Del Garda with its imposing squares, cobbled streets and buzzing waterfront, was a fine vantage point to explore Garda’s delights.

SUBSCRIBE TO OUR NEWSLETTER FOR TRAVEL OFFERS AND INSPIRATION

The town, positioned on the northern-most reaches of the lake, is markedly different to the villages further south like (the town of) Garda with its beautiful bay and Limone, famed for being the northern-most point where lemons have been cultivated. In Riva, you don’t have to look hard to see evidence of the town’s Austrian heritage, but as soon as you head south along the lake we’re talking pure Italian, and a good thing that is too especially when it comes to food and wine. Bardolino, one of Italy’s great wines, is grown around the lake.

While the lakes are the focus of Peregrine trip, the adventure begins in Milan and finishes eight days later in the exquisite Verona, the town that inspired Shakespeare to lofty heights. 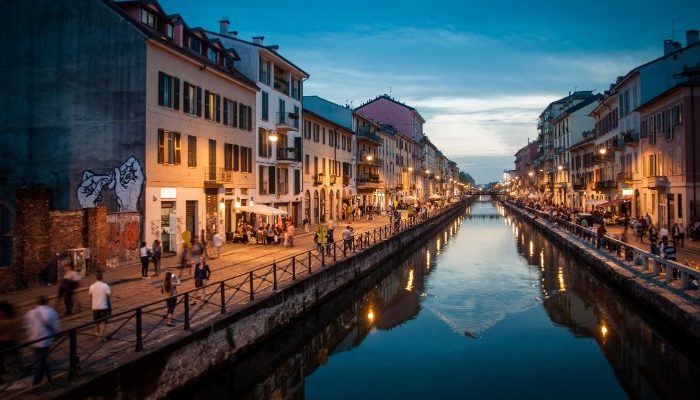 Milan’s canal by night. Image by guillermohor via Shutterstock.

Milan, Italy’s capital of fashion and design, is by common agreement a hard nut to crack, unless you have access to insider knowledge. Peregrine’s guide Roberta provided in spades and she led us confidently through the labyrinth that is Milan’s inner city and up to the top of the city’s famous Duomo for a heavenly view of this sublime city.

Roberta was equally knowledgeable and entertaining about the joys and delights of life around the lakes where she had grown up. She also had terrific recommendations for where to eat and drink when we branched out on our own for a meal, (always important in Italy where the best-looking restaurants don’t always deliver on their promise).

An added bonus of this trip was the overnight excursion into Switzerland and the Bernini Express, arguably the most scenic rail journey in Switzerland, which is saying something. Fifty-five tunnels and more hairpin bends than I could count. Thrilling is the word that springs to mind.

There are so many words spring to mind about this entire trip but only one sums up it: Love.

I loved it, dear reader. I promise you, you won’t be disappointed.

Kay O’Sullivan is no accidental tourist. More than a decade ago she decided to combine two of her favourite things - travel and journalism - and morph into a travel writer. Since then she has written on travel for numerous publications and websites.