Lebanon lives on: ‘These buildings represent how ugly we once were’ 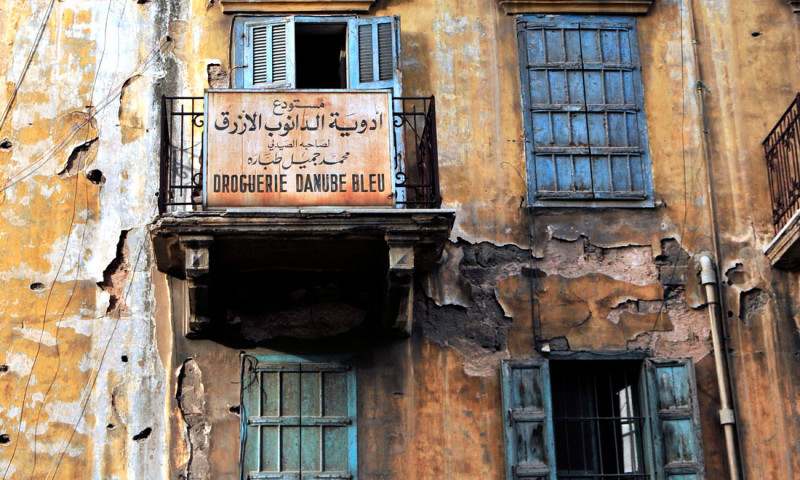 Time was, Lebanon was the place to holiday. Balmier than the French Riviera, sassier than Alexandria and more exotic than Greece, Beirut was where Europe’s hippest and hottest jetted to for drinking, dancing, tanning, feasting and merry-making. Then war happened. A long one. And for twenty years, Beirut became a literal battle zone.

It’s a fairly rare thing for a nation’s own conflict to be fought out in its capital. So far as civil wars go, internal conflagrations tend to take place in the provinces, not the central cities. Lebanon was a devastating exception. With the various fighting factions hailing from the north, south and east of the country, Beirut – situated slap-bang in the middle of the country – became the logical place for Christian and Muslim militia groups to tussle out their differences. Then Syria got involved. Then Israel. Then Iran. Then America. Unsurprisingly, tourists started holidaying elsewhere. 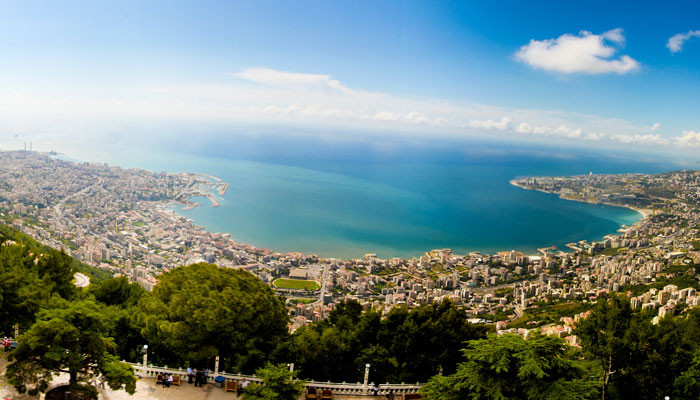 Peace officially came to Lebanon in 1991, though 24 years on you still see Beirut’s battle scars everywhere. ‘Post-apocalyptic Paris’ is how Lonely Planet described it. Apartment blocks of elegant design with blasted-out bay windows stand gutted on prime seaside frontage. Narrow alleyways pockmarked with potholes suggest a government with greater civic priorities. From time to time you spy bullet holes in walls. And then you turn a corner, cross a road, skulk beneath an underpass… and find yourself ambling along a boulevard of parked Lamborghinis, high end fashion outlets and swanky cafes. Here dapper men and manicured women trade the day’s gossip over shisha and espressos, Filipino hired hands lead their owners’ poodles around for strolls and people pay for things in US dollars. 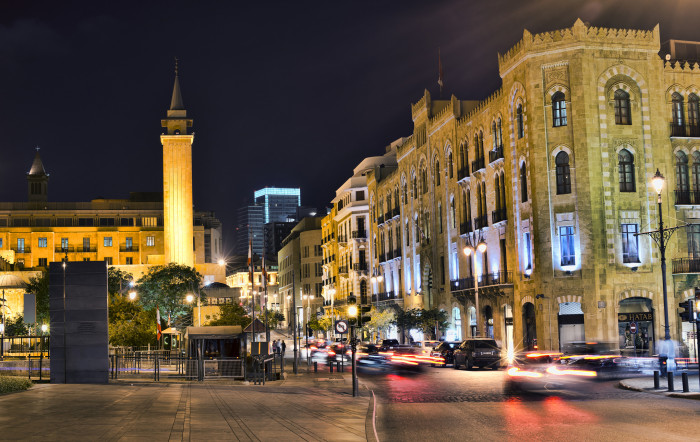 In many ways, Lebanon is a country that doesn’t seem to add up. The war was between Christians and Muslims, but the biggest tensions nowadays are between Sunnis and Shiite. Locals bemoan Beirut’s traffic congestion, yet when the government attempted to curb it by ruling cars ending with even numbers on their plates could only drive every second day (and those with odd ones every other day), people just went out and bought a second vehicle. Hezbollah, a military group classified by the US government as a terrorist organization, is considered militarily more powerful than the Lebanese army. Their representatives occupy seats in parliament – whence they regularly call for the obliteration of Israel – and yet Lebanon remains the world’s second largest recipient of US aid. These days Hezbollah is arguably more invested in fighting Islamic State in Syria than railing against occupied territories, though you pass through plenty of Hezbollah-manned checkpoints on the drive out to the Roman city of Baalbek.

I’ve never been to Palmyra – and now, thanks to ISIS destroying it in September, will never get to go – so I can’t say how Baalbek compared. If Palmyra had an inch on Baalbek however, its destruction really is a devastation. While not usually enthralled by old stone pillars and the like, I found it impossible not to be captivated by Baalbek.

I hire a tour guide there to show me around the site; a sweet little old man who started teaching himself about the site at the age of seventeen. I estimate him to now be in his mid 70s, and his knowledge of the site befits someone who’s dedicated 50-something years to appreciating its significance.

‘Five years ago we would have 300 people coming every day’ he explains. ‘Now, maybe 20. We don’t have ISIS in Lebanon, but people are still scared of them’. It depresses me to think of this little old man getting up every day, donning his tweed suit and trinity cap, and heading out in the hope that there’ll be someone he can pass on this knowledge to. Some days, he says, there’s no one. And all because his country happens to share a border with one currently being torn apart.

As we tour Baalbek, my guide explains how this 1st Century city came to be. First step was shipping the granite for these massive columns over from Egypt. Then the real work began. These chunks of rock were literally dragged by slaves and elephants, over 100km of Lebanon’s absurdly mountainous terrain, to the site of construction. By some calculations, most days they’d only be moved a few centimetres. Simply getting the materials in place was a matter of decades… and that was before the building even began. 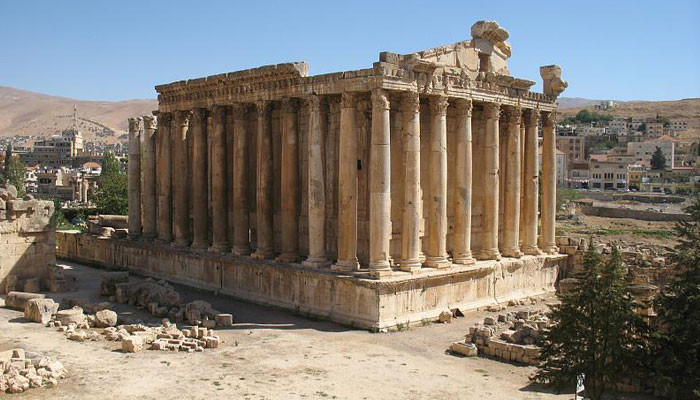 Some of the columns are 20 metres high. Peering up at them from ground level is dizzying, but my guide calls me over to inspect close-up the outer walls of the Temple of Bacchus.

‘The size is impressive’ he says, ‘but sometimes you need to look at the small details to understand their magnitude.’ He runs his hand over the walls. ‘These bricks are three metres long and one metre high. They weigh many tons. And yet look how precisely they fit in beside each other. There is no gap anywhere between them, not even a millimetre. They had to be exactly right. Most builders wouldn’t be able to attain this precision today, even with little bricks’. He points up at some decorative friezes, some of which have been defaced. ‘The Mongols did that’ he says, matter-of-factly. ‘All of history is just the story of peoples trying to erase the greatness of their predecessors’. 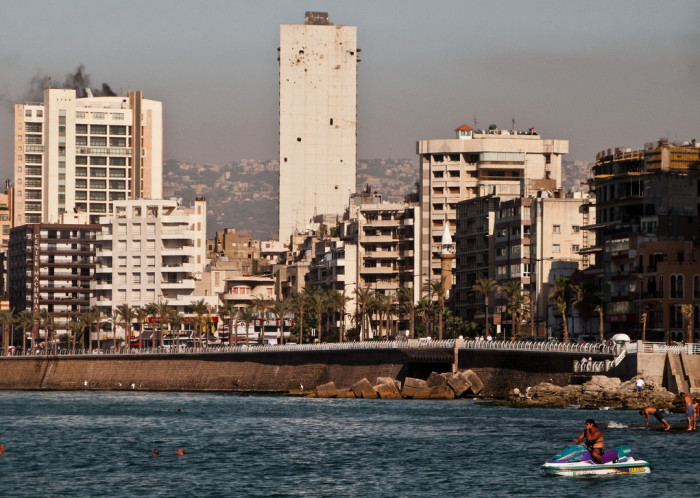 Modern Beirut. Holidayin’ in the foreground, Holiday Inn in the back.

Looking up at the destruction, I think of Beirut’s bullet-riddled Holiday Inn; a building used during the was as a sniper tower that now serves as an unofficial war memorial and tourist attraction. Recently, there’s been bit of a debate about what to do with it. It is an eyesore; it is occupying prime real estate in a packed-out city; and the Lebanese certainly possess an appetite for construction. Cranes and the sounds of demolition are everywhere.

Some, however, like Beirut-based architect and urban design consultant Abdul-Halim Jabr, think the Holiday Inn should stay. ‘For social scientists,’ he writes, ‘for civil society at large, these few buildings represent the evidence of how ugly we were’. Over the border, in the Palmyra that once was, it’s precisely the opposite. And yet precisely the same.