Why the best travels of my life started after 50 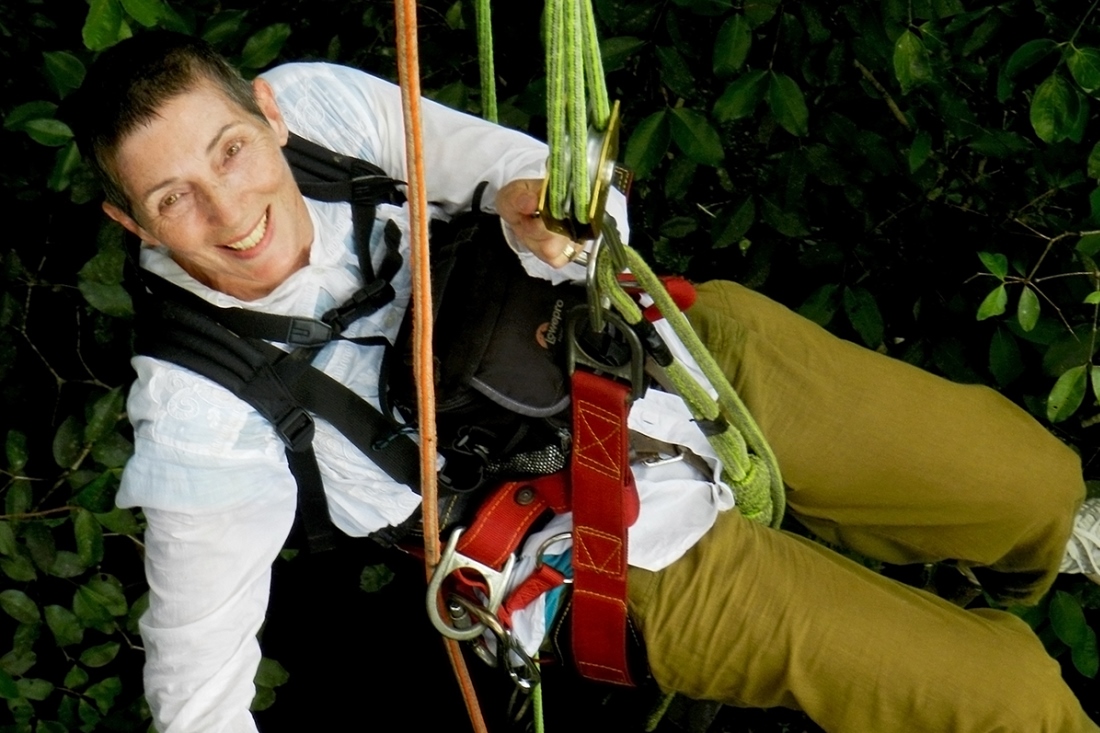 This post was originally published on The Journal by our sister company, Intrepid Travel.

In November 2013, when I was 63 and my husband, Don, was 71, we went to Iguazu Falls in Argentina. At Iguazu you can go under the falls in an open boat. From a walkway at the top of the falls I pointed out the boat to Don. “There’s no way I’m going in that!” he said.

Of course we went in it. 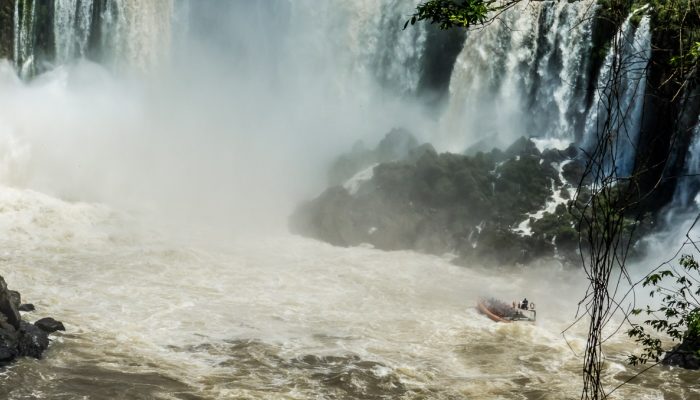 Afterwards I wrote this:

What an experience! We knew we’d get wet, and were wearing only swimsuits, but wet is not the word. Drenched! Saturated! Soaked! Deluged! It was like heading into a torrent. So much water coming at me I couldn’t breathe, and had to turn my face away, and for a second thought “I could drown here”. All of us screaming with excitement. And me laughing so hard I thought I’d choke. It was a laugh that came from the gut, from the very core, and filled the entire body before escaping through the mouth as a roar, a veritable volcano of a laugh that went on and on. In a good way. In the best way. And what was so funny? The sheer ridiculous absurdity of what we were doing – sitting in an open boat heading straight into a waterfall. And the fact that we actually chose to do it.

I doubt I have ever felt more alive.

It’s 2011. Don is 68 and past his due-by date at work. He desperately needs to retire, so much so that he’s starting to get sick, but we don’t know how we can afford it. We have some retirement savings, and some pensions, but we also have debts and a mortgage. Through a lot of soul searching the idea arises to sell the apartment and use the proceeds to pay off our debts and travel the world. Once the solution appears it seems obvious. It comes down to this: do we want a home or do we want a life? It takes four months to sell the apartment, its contents, and our car, and for Don to close his business. We’ve been nomadic ever since. 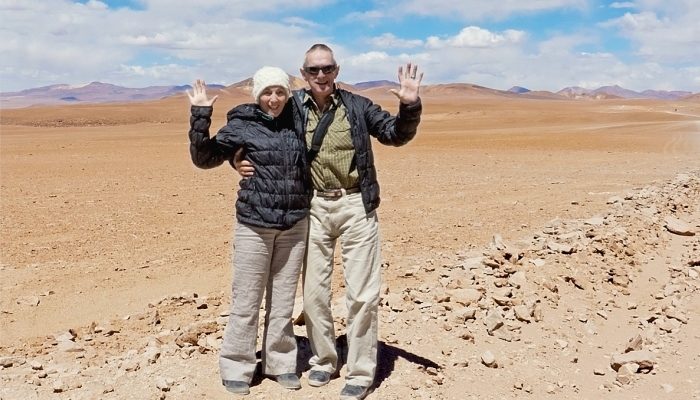 Alison and Don in Bolivia

The idea of home has become very fluid. Home is with each other. In the past five and a half years “home” has been a hotel, hostel, apartment, tent, train, ship, plane, house-sitting, or staying with family. There’s an enormous freedom in not owning property.

We began our journey in September of 2011 and since then have been to 31 countries on six continents. We have traveled in India and Southeast Asia, Australia and the South Pacific, South and Central America, Europe and the Middle East. Over a million miles in all. The more I travel the more I want to travel. 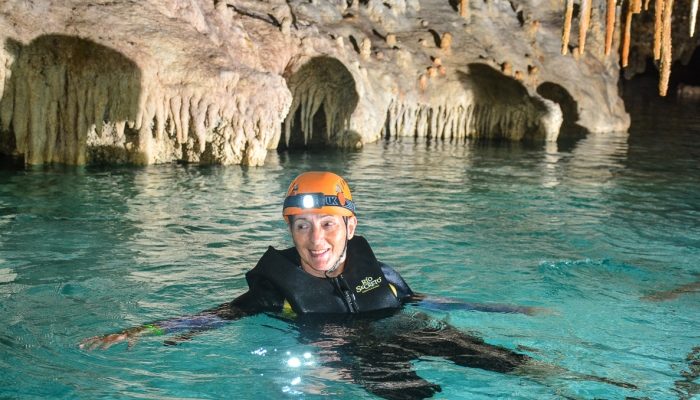 William Blake said: A fool sees not the same tree that a wise man sees. I traveled extensively in my twenties, motivated by a great curiosity. I found it enriching and exciting, but I did not see in the way that I see at this stage in my life. It’s not that I was a fool so much as I was foolish, and young. There is a presence and confidence that comes with having lived a few years. Perspective on life is different. Like most people, in my twenties I felt invincible, and of course I assumed that I had all of my life ahead of me. Traveling at that age is about seeing the world and how others live, but it is also a grand party. Life sings and zings and flits all over the place.

Now that I’m older, life is short, so short, and so precious, and each moment is to be savored. Because of this I see and feel things differently. When I saw the Eiffel Tower in my twenties I thought it was pretty amazing, but I was more interested in talking with the handsome French man who struck up a conversation with me. Seeing it again in my fifties it was as if I really saw it for the first time: its beauty and grandeur, its simplicity, its complexity, and its sheer elegance. I was stunned, and realized I’d never really seen it before. 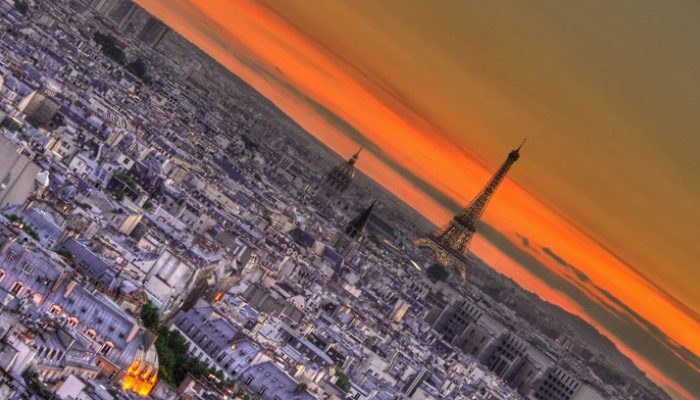 The Eiffel Tower in Paris

In our travels we’ve done things we never thought we would ever do. We went ice trekking on Perito Moreno glacier in Argentina. This time it was me who was afraid and Don who was determined to do it, to put on crampons and trek across the shifting crevices of a glacier. There is nothing quite like stepping out of your comfort zone. Every cell of the body sings. The heart rejoices, and life shouts YES!

RELATED: EMBRACING THE SPIRIT OF ADVENTURE: THE CHANGING FACE OF TRAVEL

We have been parasailing and zip-lining, waded our way through an underground river with only headlamps for light, climbed a volcano in the dark to see the sunrise, been up in a hot air balloon, snorkeled in several different places, hiked all over the world, and dissolved into tears in the ancient tombs of Egypt, in Hindu temples in India, and in Buddhist temples in Southeast Asia.

Some of the most extraordinary things we’ve seen and experienced include the Temples Of Humankind at Damanhur in Italy, Gaudi’s Sagrada Familia in Barcelona, a four-hour charismatic church service in Samoa, the ancient ruins of Petra in Jordan, and a two-week festival of indigenous dance and music in Mexico. We feel more alive, more engaged with life than we ever have. 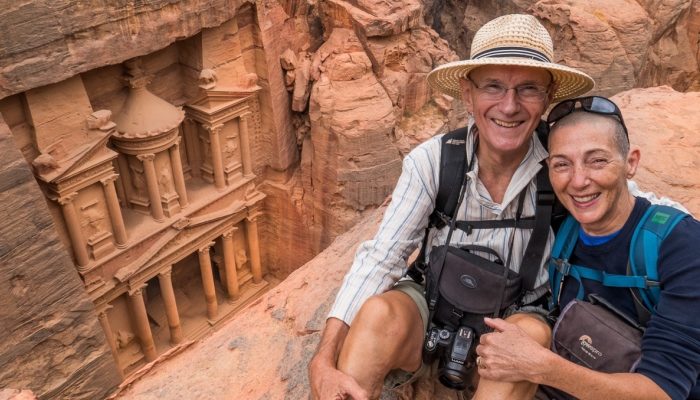 Alison and Don in Petra, Jordan

When I was young I saw things in black and white and thought I knew everything. Now that I’m older I realize that there are grey areas in everything and that the more I learn the less I know. It means that I have a greater compassion for all I encounter. I’m softer now, and have nothing to prove. This deeply affects how I experience the world and how I interact with people. If there’s one thing we’ve learned it’s that if you approach people with kindness and an open heart they will respond in kind and this has been true everywhere we’ve been. Language is not an issue. Smiles and kindness are universal. We’ve rarely felt unsafe.

RELATED: HOW TRAVEL HAS CHANGED FOR THE BABY BOOMER GENERATION

The inner journey has been as enriching as the outer journey. At some point we stopped worrying so much about money. Our relationship has deepened; when you’re together 24/7 you learn to resolve issues very quickly. And we have learned to trust, and surrender, in a way that we never had before we embarked on this journey.

We’re now 66 and 74 and we still have a list of places we’d like to travel to. Even though we take quite long breaks, staying in one place for months at a time, we’re not done yet. Age is just a number; and whatever number you are, don’t let it stop you traveling. 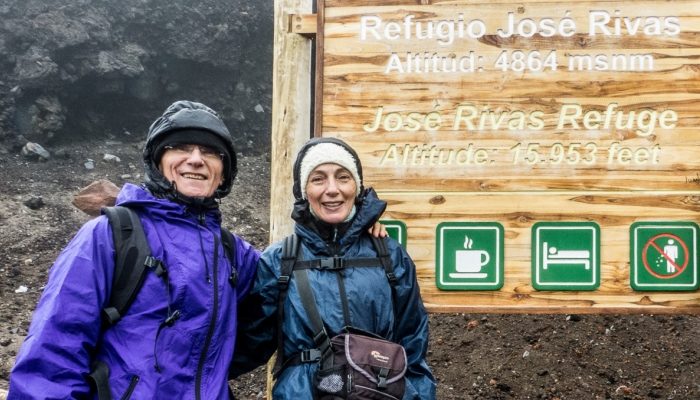 Alison and Don in Cotopaxi, Ecuador

To continue following the adventures of Alison and Don, check out their blog alisonanddon.com.

Alison Armstrong was born in Australia and immigrated to Canada in her early thirties. She travelled extensively in her twenties, including two four-month overland trips through Africa and South America. Since 2011 she and her husband Don Read have been traveling continuously. They have been to 31 countries on six continents.