Possibly one of the most overlooked European cuisines on the continent, Portuguese food is sumptuously rich and diverse.

Whether you’re in the market for the freshest fish, smoothest port, smokiest sausages or sweetest pastries – you’ll find it all in this corner of the Iberian Peninsula. They’re not ones to be wasteful either and fully embrace the idea of nose-to-tail cooking. No matter where you’re exploring in Portugal, there are regional delights just waiting to be discovered around every corner. With that said, here are ten local dishes you should definitely keep an eye out for on your Portuguese travels.

Simple yet wholesome, caldo verde is a popular Portuguese soup commonly served at special occasions like weddings, birthdays and festivals. Its basic ingredients include potatoes, olive oil, collard greens and salt, although garlic or onion might also be added. Other recipes have been known to mix in small chunks of meat like ham hock too. Originally from the Minho Province in the north, this dish usually comes served with a side of boiled Portuguese sausage and cornbread for dipping. 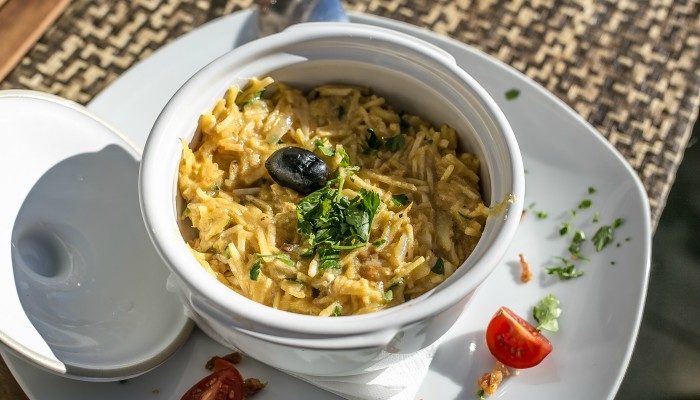 Dried and salted cod, or bacalhau, is a very traditional and versatile Portuguese ingredient. Dating back to the 1500s when refrigeration didn’t exist, these methods of preservation helped the fish to keep its oil and nutrients. Countless dishes can be created using this staple. From bolinhos de bacalhau, small cod fritters made by combining the fish with eggs, onions and parsley before frying. To bacalhau à brás, a meal of salted cod, onions and fried matchstick potatoes bound together with scrambled egg.

GO NOW: DINE LIKE A LOCAL ON THIS 7-DAY PORTUGUESE BREAK

Rustic and comforting, açorda was introduced to Portugal during the ancient Arabian occupation that lasted from the 8th to 13th century. Its name comes from the Arabic ‘ath-thurda’, which translates as bread soup. The classic recipe is made by soaking bread in a broth of coriander, olive oil, vinegar, water, salt and garlic, and topped with a poached egg. Although there are also a few other variations to be enjoyed, such as açorda de camarão with prawns and açorda de bacalhau, of course. 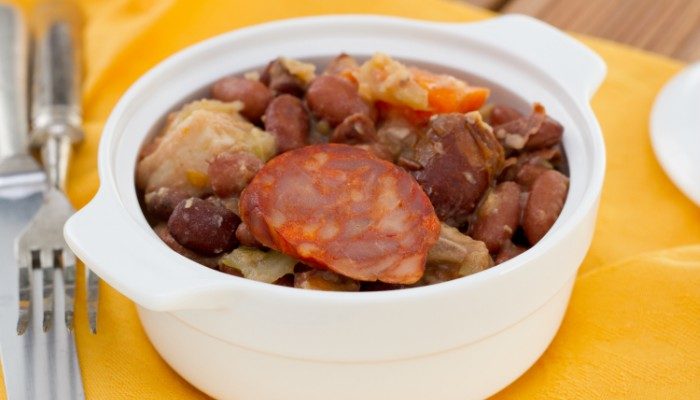 If you’ve travelled Brazil, chance are you’ve come across their national dish of feijoada, a smoky stew with northern Portuguese roots. Playing a pivotal role in Portugal’s cuisine for centuries, it’s created from a melange of different pork cuts like ribs, belly and sausages, which are cooked together with kidney beans and plenty of earthy seasonings. The Brazilian version follows much the same recipe but opts for black beans that give the meal a saltier edge. You’ll find this being served up at large gatherings.

RELATED: 7 THINGS TO SEE, DRINK AND DO IN PORTO

Put simply, cozida à portuguesa is an assortment of meats, sausages and vegetables boiled until perfectly tender. Because each ingredient has its own cooking time they’re added in phases, building a deep flavour. You’ll come across numerous regional variants of this plate, in fact, it’s so cherished that you might even hear it referred to as part of Portugal’s legacy. The difference in taste between the regions comes from the way the sausages are prepared and the fat content of the cuts of meat used. 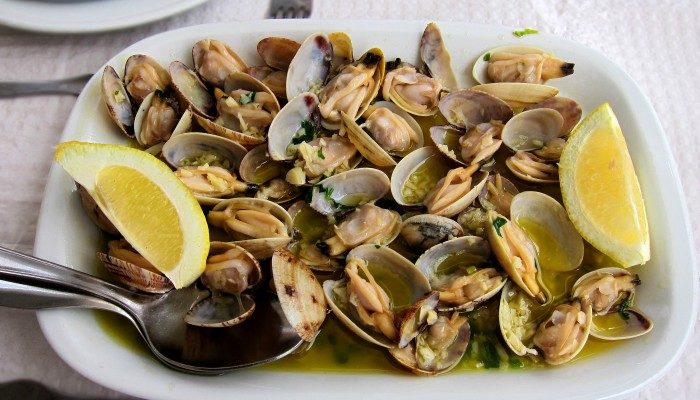 On a trip to Lisbon make sure you don’t leave without sampling this seafood speciality. Named after the 19th century poet of the same name, you’ll see Amêijoas à Bulhão Pato, or clams in white wine, on menus across the capital. The sauce they’re coated in is made from olive oil, coriander, garlic, a good glug of dry white wine, a pinch of salt and pepper, and a drizzle of lemon juice. They’re a popular appetiser amongst locals, but if you take a liking to them there’s an option to enjoy them as a main too.

SUBSCRIBE TO OUR NEWSLETTER FOR THE LATEST OFFERS, TRAVEL TIPS AND MORE

You won’t be surprised to hear that the Portuguese love sausages and the alheira has been crowned the ‘King of Portuguese Sausages’. Different from your usual sausage, it uses any meat other than pork such as veal, quail or chicken which is mixed with bread. They were first created by the Jews of Portugal who were given the choice of expulsion or converting to Christianity back in 1497. Those who opted for the latter strung up these sausages to avoid detection during the Portuguese Inquisition. 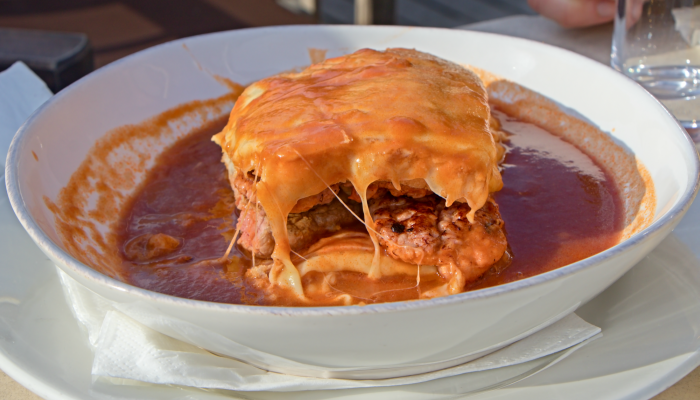 You’d describe a francesinha as anything other than refined, this Portuguese sandwich is utterly indulgent. Born in Porto, it’s made from bread, ham, cured sausage, fresh sausage, steak or roast meat and covered with melted cheese. But it doesn’t stop there, it’s then doused in a hot tomato and beer sauce and served with French fries. Francesinha means Frenchie and is supposed to be a Portuguese take on a classic croque monsieur. It was thought up by Daniel da Silva in the 60s, an immigrant who had recently returned from France and Belgium.

BOOK TODAY: EXPLORE THE IBERIAN PENINSULA ON THIS 8-DAY VOYAGE

Imagine what a duck paella might look and taste like and you’ll be able to picture arroz de pato or duck rice. Rice production in Portugal forms part of its Muslim legacy and is still grown in the southern half of the country today. Arroz de pata is made using wild duck as it has a gamier flavour than its breeding cousin. It also uses a similar cooking technique to one you’d use to prepare a risotto or rice pilaf. It’s a pretty heavy dish and so a green salad and good glass of red make a good accompaniment. 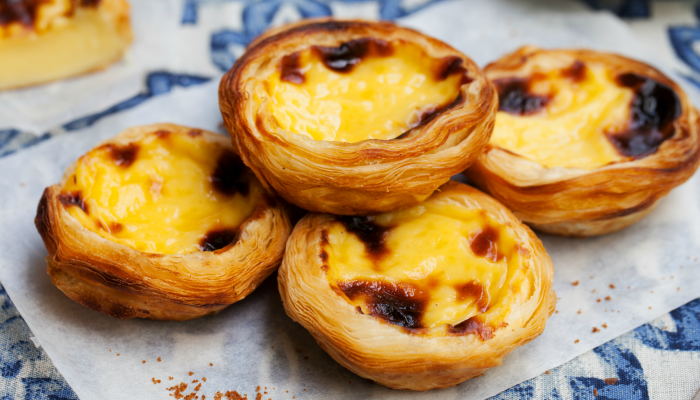 There’s no hiding that pastéis de nata are the world’s favourite Portuguese sweet treat. Beautifully crispy pastry cases filled with a thick vanilla egg custard and dusted with cinnamon, what’s not to like? They were invented in the 18th century by Catholic monks from the Santa Maria de Belém parish in Lisbon, hence why you might also hear them called pastéis de Belém. The recipe was initially concocted as a way to use up surplus egg yolks left behind from starching monks’ clothes with egg whites.

RELATED: 5 OF THE COOLEST NEIGHBOURHOODS IN LISBON

Taste the culinary delicacies of Portugal in style on a Peregrine Adventure Cruise along the coast of Spain, Portugal and Morocco.