Photo essay: Unforgettable moments from Antarctica and the Arctic 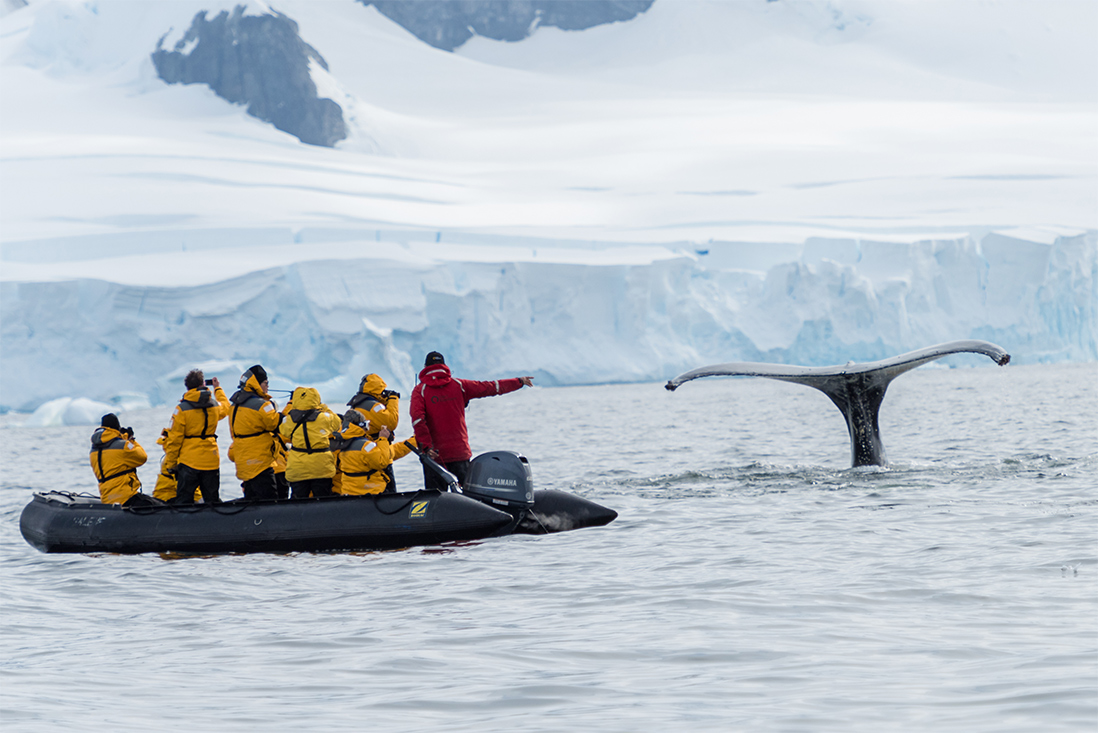 For professional wildlife photographer, Michael Snedic, the polar ends of our planet are a constant source of drama and inspiration. With over 20 years’ experience as a wildlife photographer, including 16 years running WildNature Photo Expeditions, it’s the Antarctic and Arctic that continue to draw him in time and again.

“I’ve been on about seven polar expeditions now and I just love the incredible diversity that’s on offer, the chance to reach locations you only dream about and see on National Geographic or Animal Planet. It’s very special indeed. There’s something about the combination of beautiful landscapes, fresh air and the excitement of people on the ship. I love taking people there and teaching them how to take the best photos.”

We asked Michael to share with us some of his favourite moments, and best captures, while experiencing life on a frozen planet. 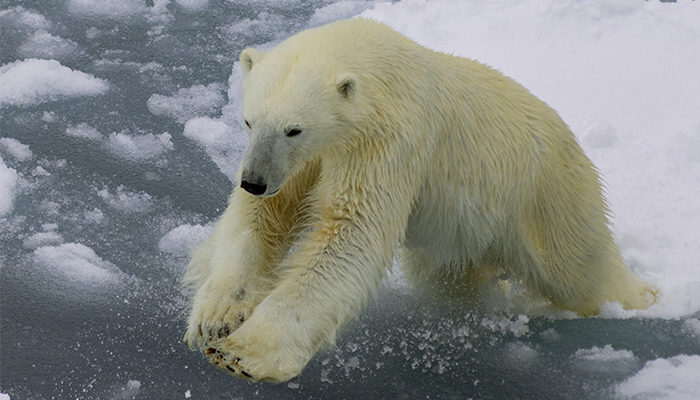 A polar bear leaps from the sea ice. Photo by Michael Snedic.

“One of my most amazing experiences, as a professional wildlife photographer, was when this polar bear came right up to our ship in Svalbard. I followed the bear patiently with my camera, while it was walking, until it came up to a section of water. I focused on its eyes and as soon as it leapt across, I took a series of ‘action’ shots, this one being the best of the selection. It was a moment I will never forget!” 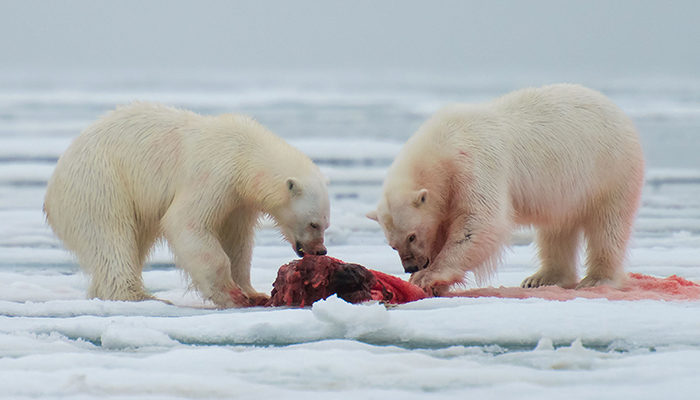 “It was late one evening in the Arctic, when a call was made over the PA system of our ship – there was a polar bear feeding on a seal. We quickly got changed into our cold weather gear and hopped on to Zodiacs to get a closer view. As I was watching and photographing the bear on the right feeding, I could see another bear in the corner of my eye, running towards the first bear. It was extremely hungry but luckily the bear already feeding didn’t react too much as it had been feeding for ages and was quite full. Being able to photograph the two polar bears together eating a seal is such a rare opportunity, it was a very special moment to capture on film.” 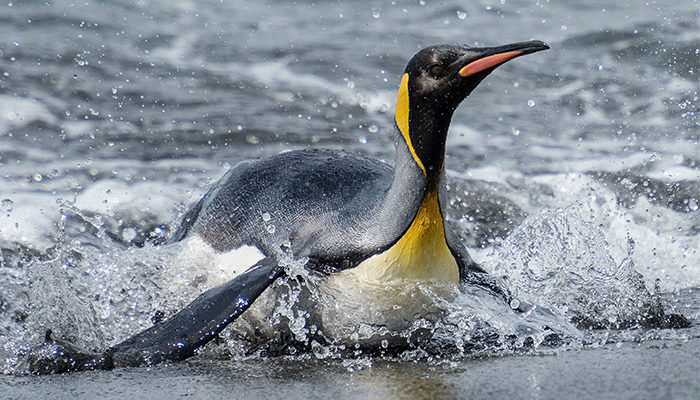 A king penguin rides the surf. Photo by Michael Snedic.

“This king penguin was one of many that surfed the waves right towards me and onto the beach in South Georgia. I used a fast shutter speed to ‘freeze’ the penguin as it was swimming towards me. There were so many of these penguins doing the same thing, I didn’t know where to turn with my camera!” 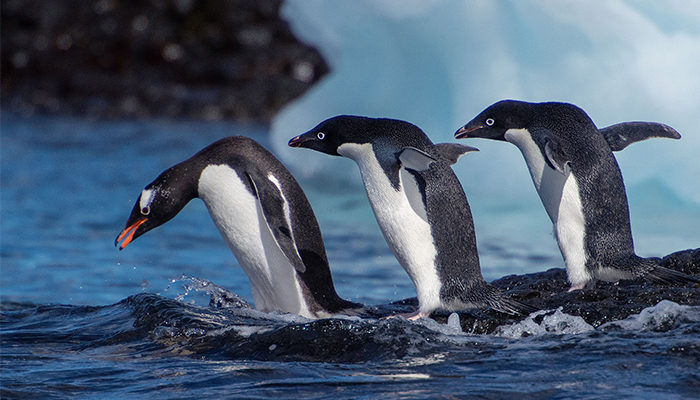 Gentoo and Adelie penguins take to the water. Photo by Michael Snedic.

“So often with wildlife photography, it’s all about pre-empting what might happen next. I was in a Zodiac in South Georgia, waiting for a flock of penguins to leap into the water from land. As soon as the first one leapt, the others followed. What made this image more interesting to me was the fact that there are two different types of penguins in the shot, all caught mid-leap! In this picture we have a gentoo leading, with two Adelie’s following.” 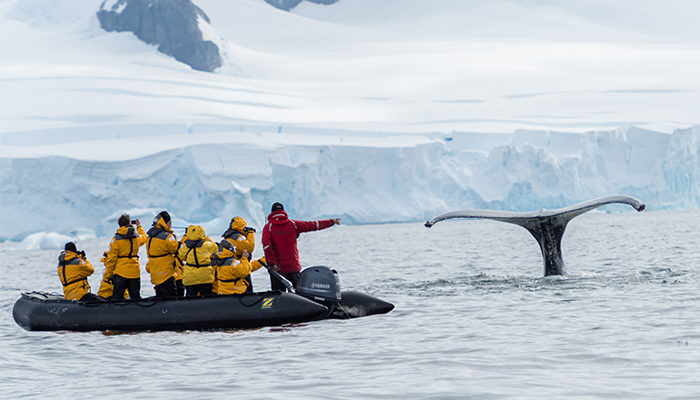 A humpback whale’s tale emerges from the water. Photo by Michael Snedic.

SIGN UP FOR PEREGRINE’S NEWSLETTER FOR TRAVEL OFFERS, INSPIRATION AND MORE

“This image clearly captures how amazingly close the humpback whales were to our zodiacs while cruising through the waters of Antarctica. This particular whale was diving under and around our Zodiac and swam towards the Zodiac in the image. My aim was to capture some of the interaction from the guests on the Zodiac, as well as part of the whale.” 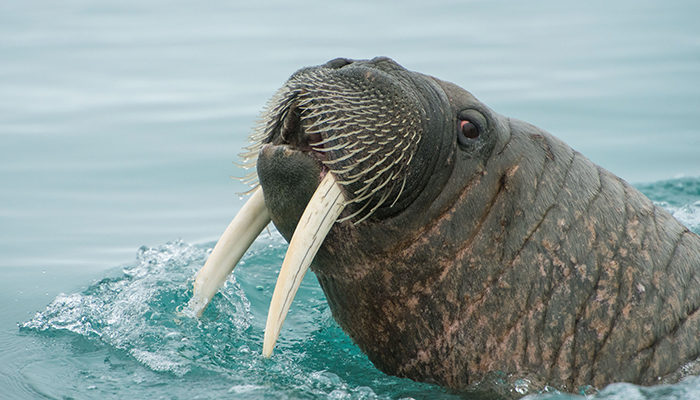 A curious walrus inspects the camera. Photo by Michael Snedic.

“We were cruising the Arctic waters in a Zodiac, watching walruses interact with each other. This adult male swam towards a small iceberg in front of us and stopped. Without warning, he swam under the iceberg and then his head appeared right next to the outboard engine, only a couple of metres from me. I quickly turned my camera, focused and snapped off a series of images. In this one, I managed to get one with him looking at me and tusks out of water. Gotcha!” 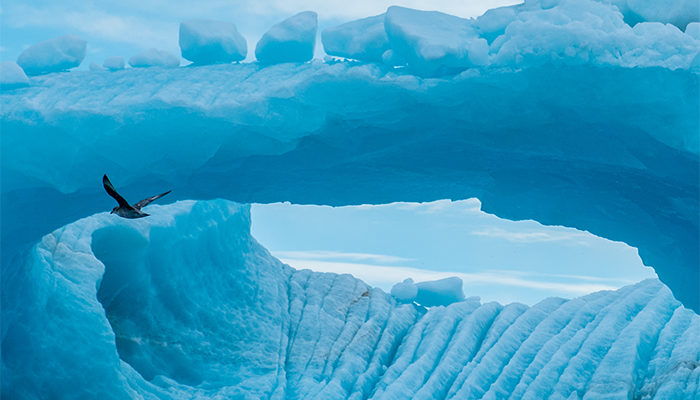 A bird flies past a gap in the ice. Photo by Michael Snedic.

“One afternoon, while cruising the Arctic waters, we came across this stunningly-beautiful scene of blue ice. Being overcast, the lighting conditions were absolutely perfect. As I took this shot, a bird flew straight through the image and I was fortunate to be able to capture it, before it flew out of the frame.” 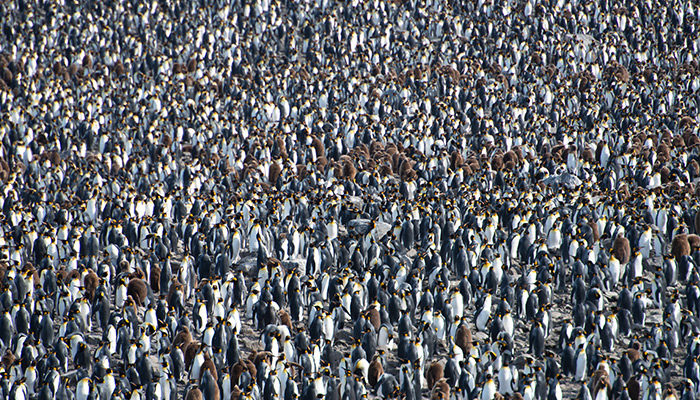 “What an unbelievable sight – tens of thousands of King Penguins with their chicks! South Georgia is one of the most incredible wildlife destinations on the planet, bar none. Seeing so many king penguins, totally unafraid of humans, is very special indeed. Here, I purposely composed this image to show the vast numbers of penguins and how they all stay in such close proximity to each other.”

Feeling inspired? Make your own polar dreams come true with an Antarctic or Arctic trip with Peregrine Adventures. You can also learn more about Michael and his photography expeditions at WildNature Photo Expeditions.

Michael Snedic is one of Australia's most experienced professional wildlife/nature photographers and tutors. He's been a feature writer for 'Australian Photography Magazine' since 2001 and owner of WildNature Photo Expeditions. Follow his adventures @michael_snedics_wildnature.