With its incredibly preserved 16th century towns and towering colonial churches, Ecuador is a living museum.

Named for its position on the globe’s equator, Ecuador offers travellers an experience of glorious Catholic architecture and stunning natural landscapes. Ecuador is considered to be home to some of the most beautiful churches in Latin America, from the mesmerizing golden interior of The Church of the Society of Jesus to the imposing beauty of La Merced. Outside of the cities, Ecuador abounds with treasures like steaming active volcanoes, sky-blue lagoons and crumbling Incan relics. 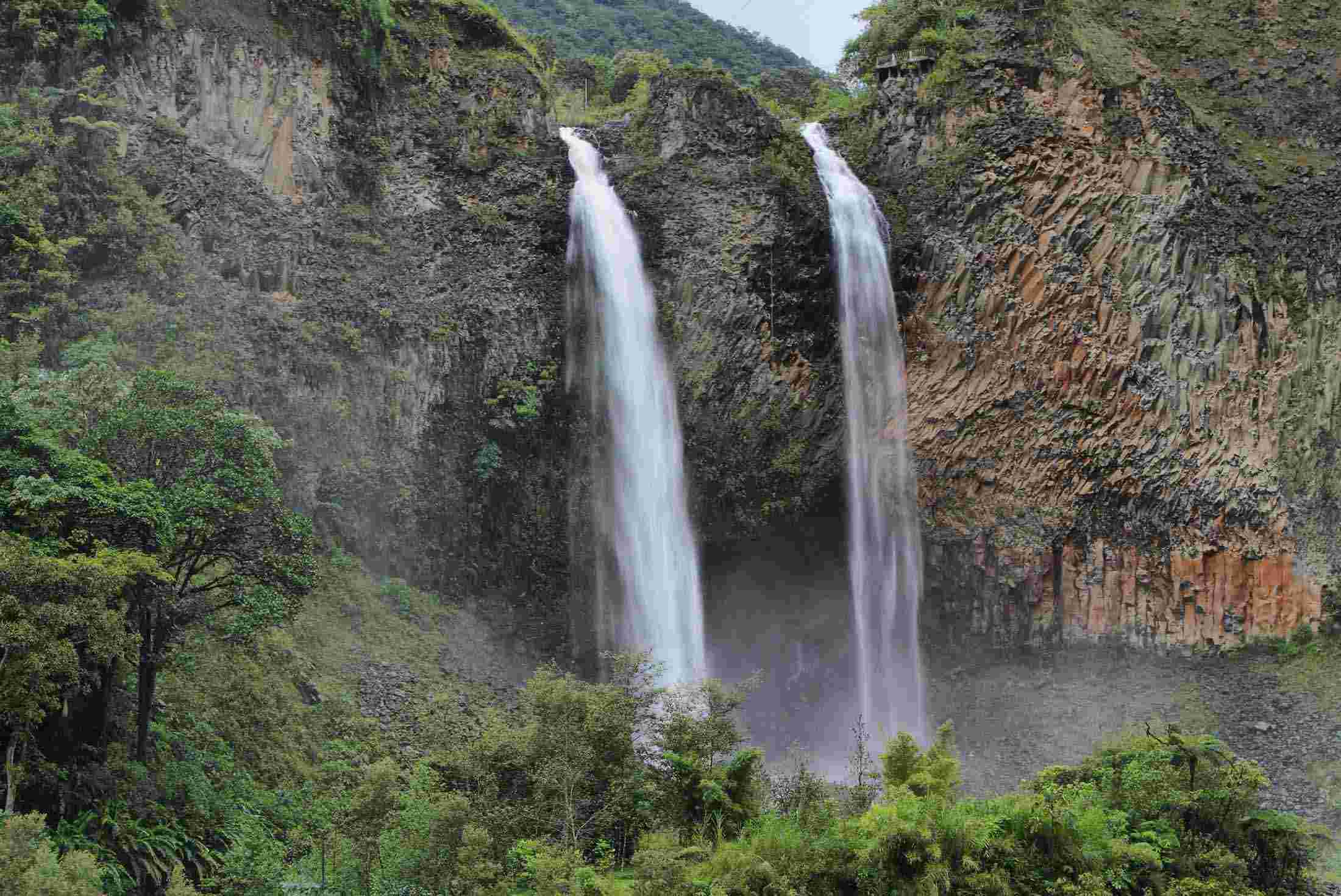 It may be a small and unassuming town, but Banos is home to luxurious hot springs and spectacular waterfalls. 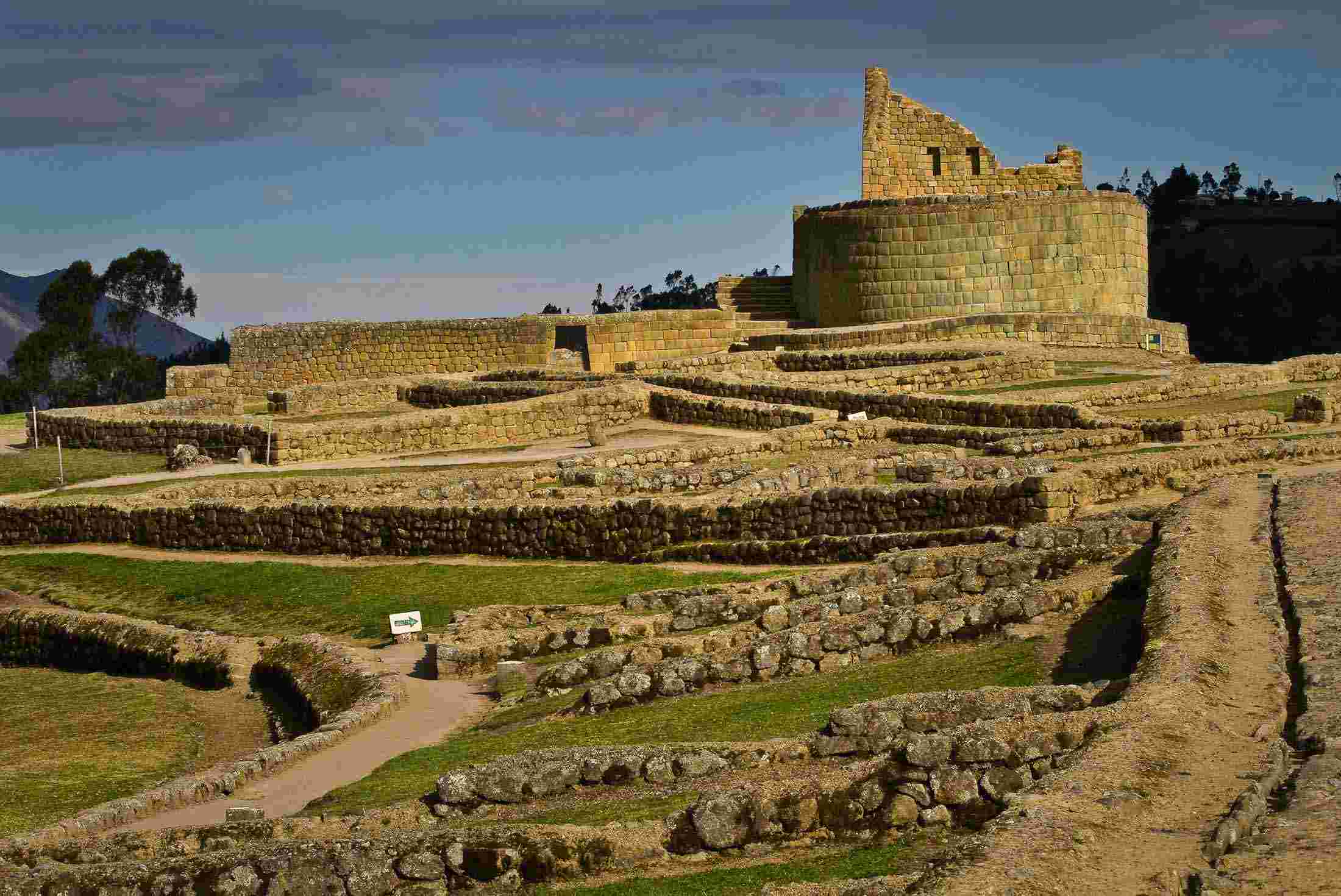 The Incan ruins near this town have revealed few of their mysteries, but the elliptical temple is quite a sight to behold.

Cuenca’s faded 16th century buildings perch high up on the cliffs. The city gives a majestic glimpse of colonial Ecuador. 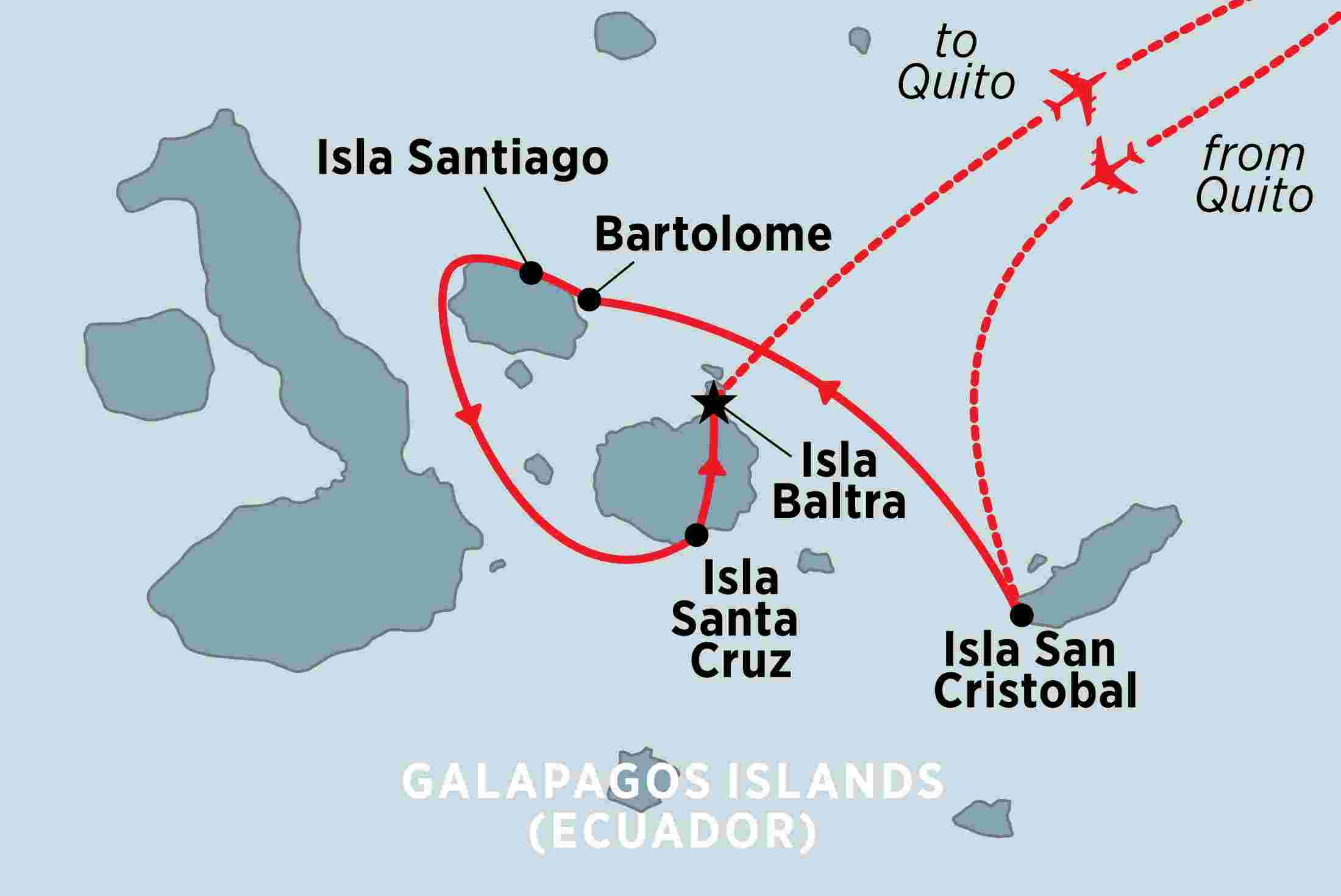 Discover wildlife at its finest in the Central Galapagos Islands with Peregrine,... 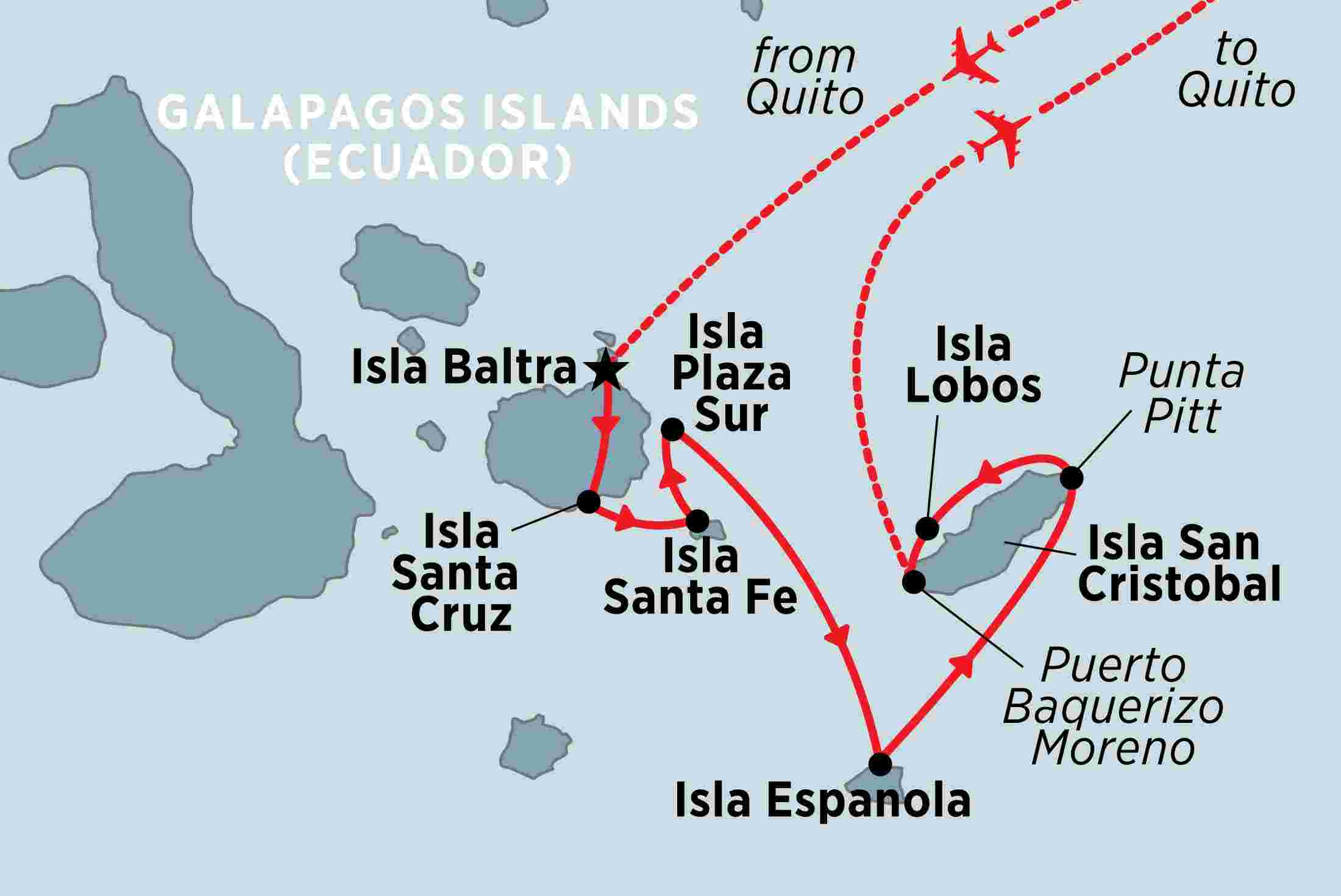 Island hop with Peregrine around the wildlife-rich waters of the Galapagos, with stops... 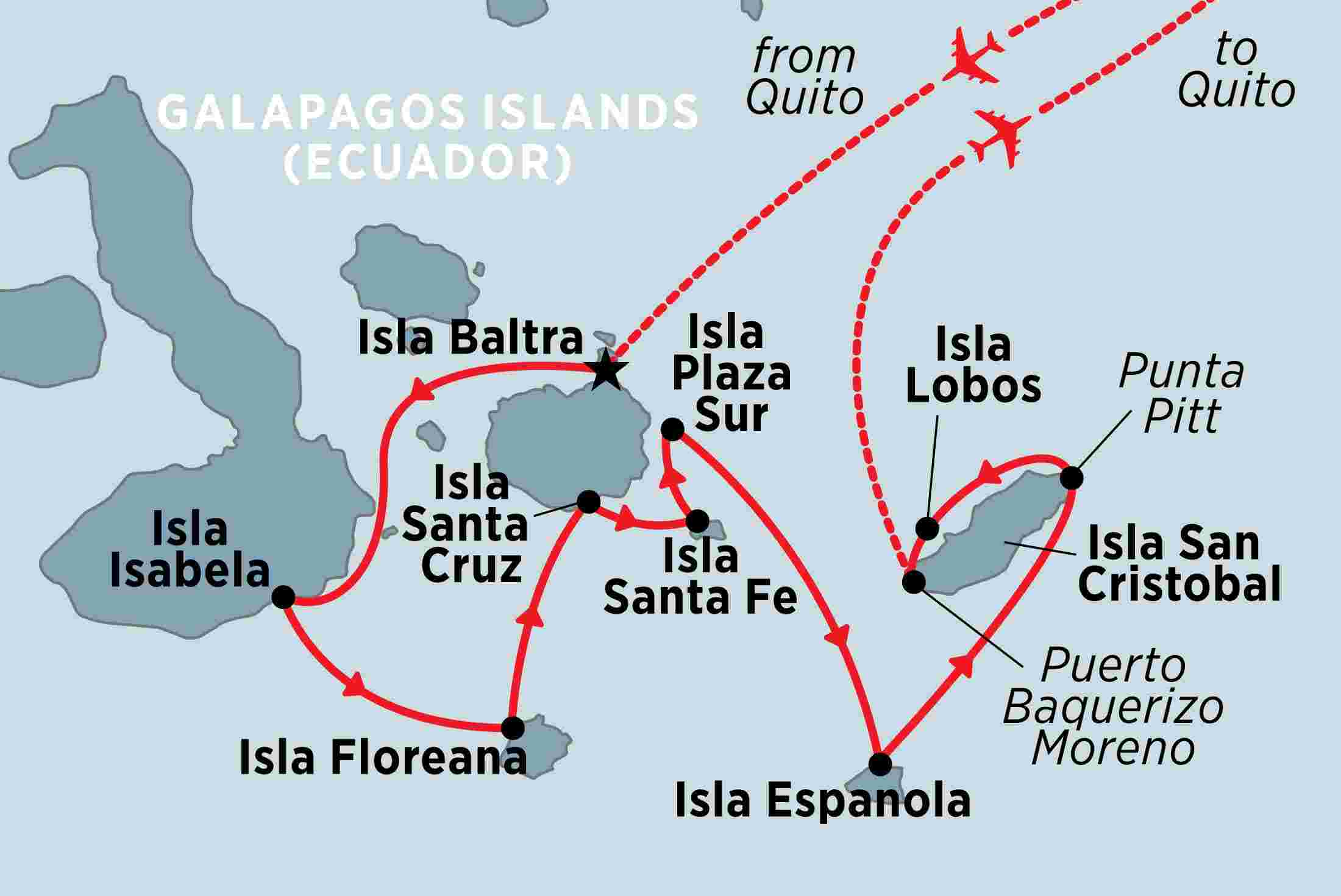 Explore the wildlife-rich islands of the Galapagos on this Peregrine adventure to Isla... 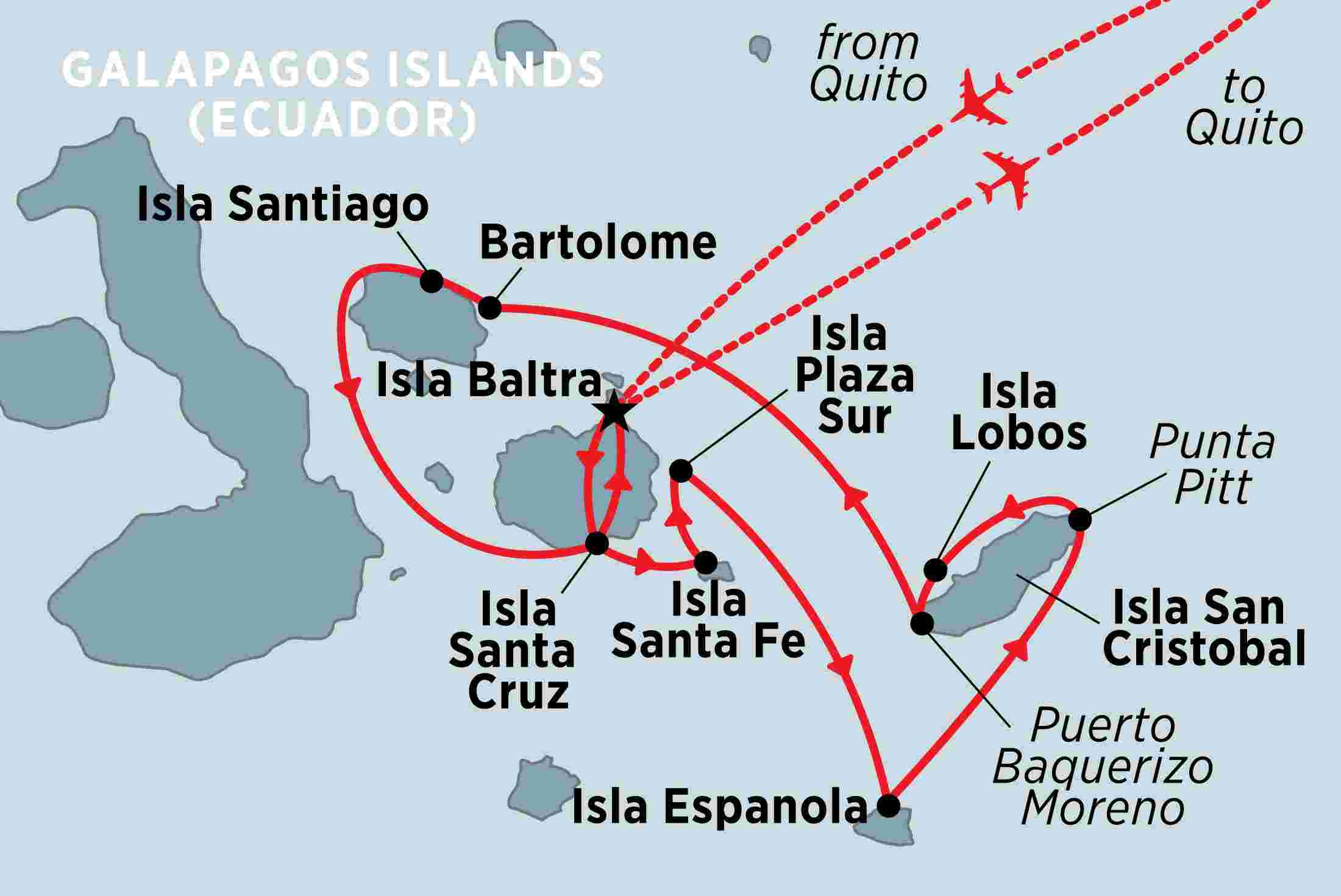 Explore the unique Galapagos ecosystem on this fascinating 10-day adventure with... 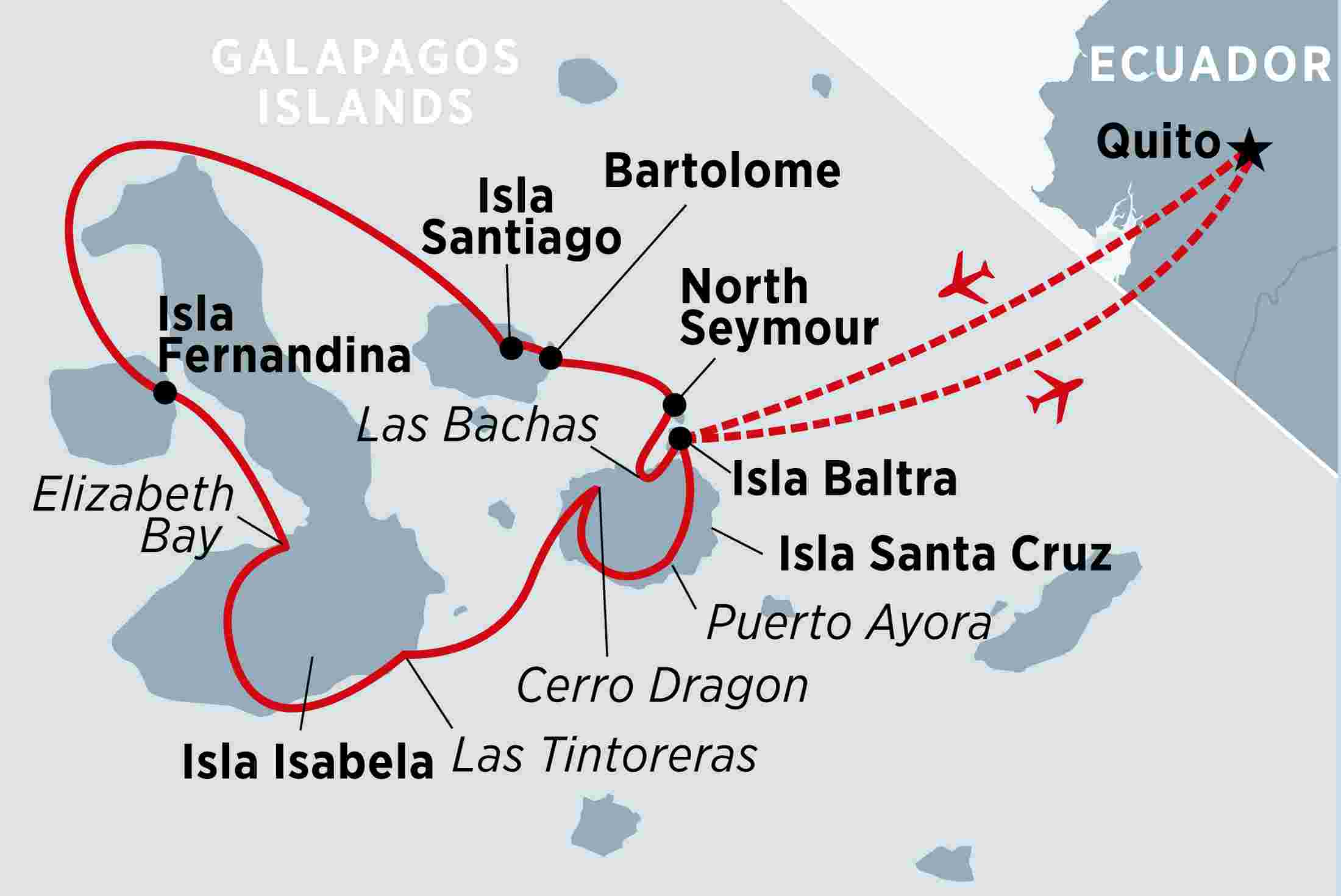 Come face-to-face with the extraordinary central islands of the Galapagos. Snorkel with... 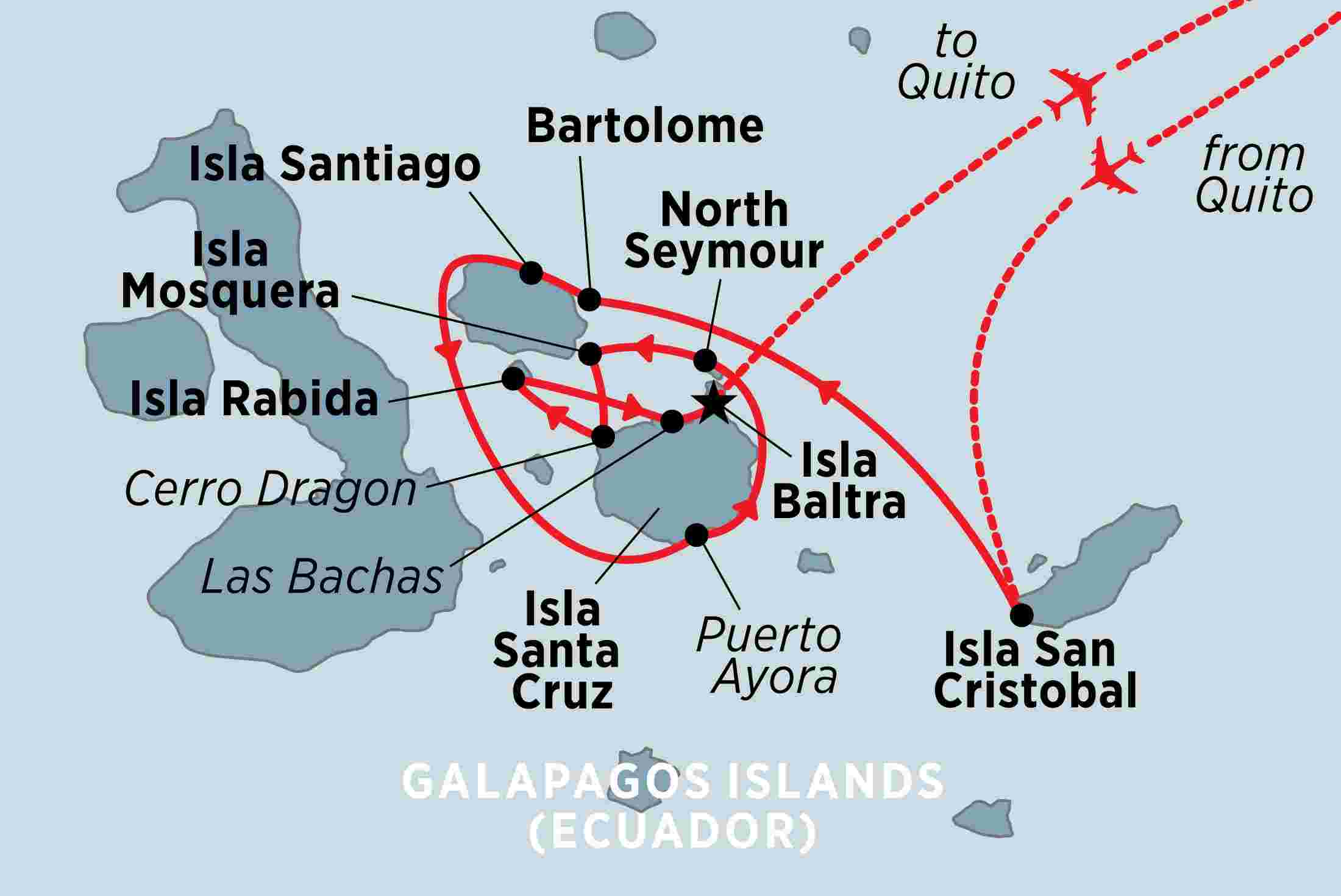 Follow in the footsteps of Charles Darwin as you explore the incredible Galapagos... 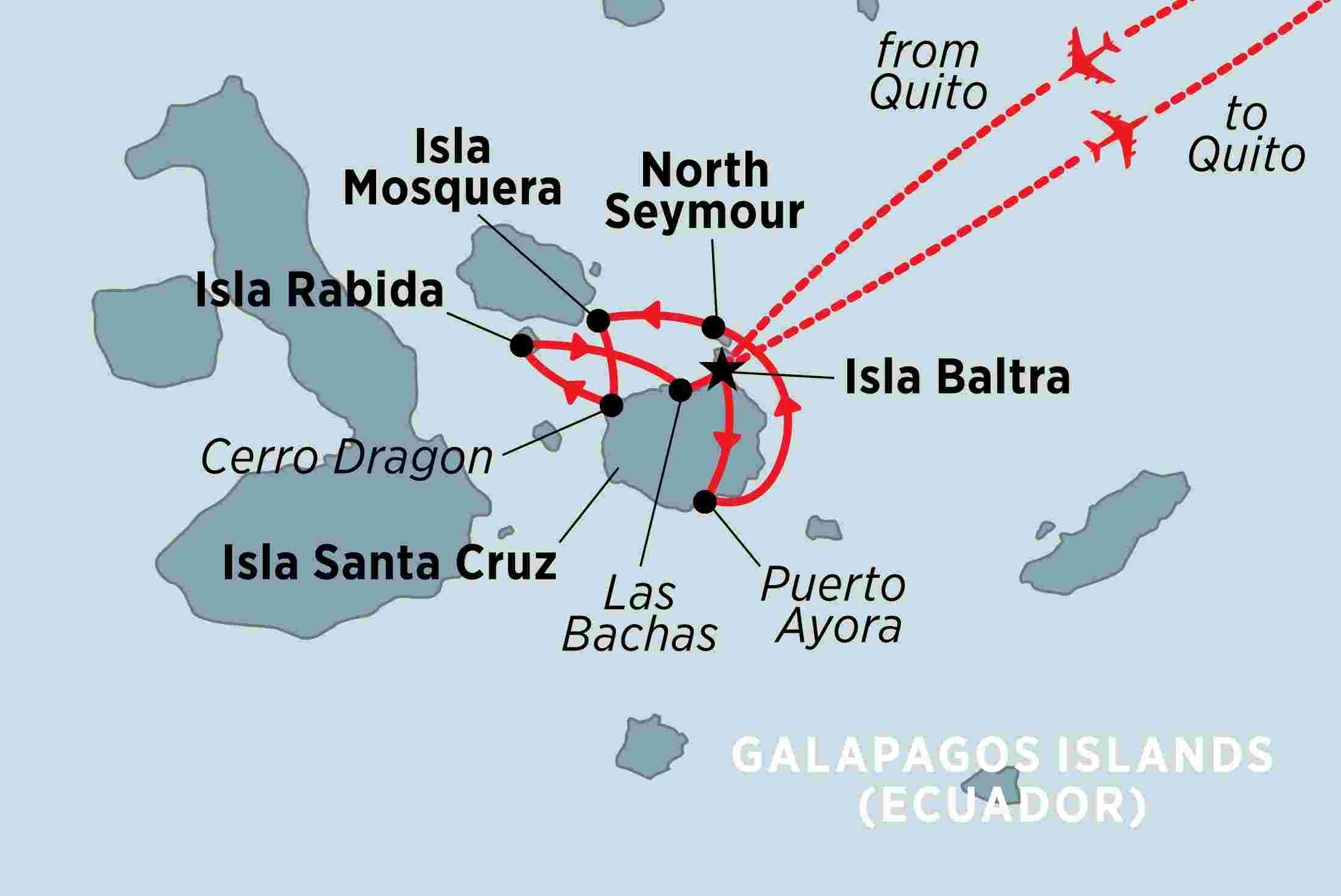 Spot bright, bizarre and beautiful wildlife on this exciting adventure through the... 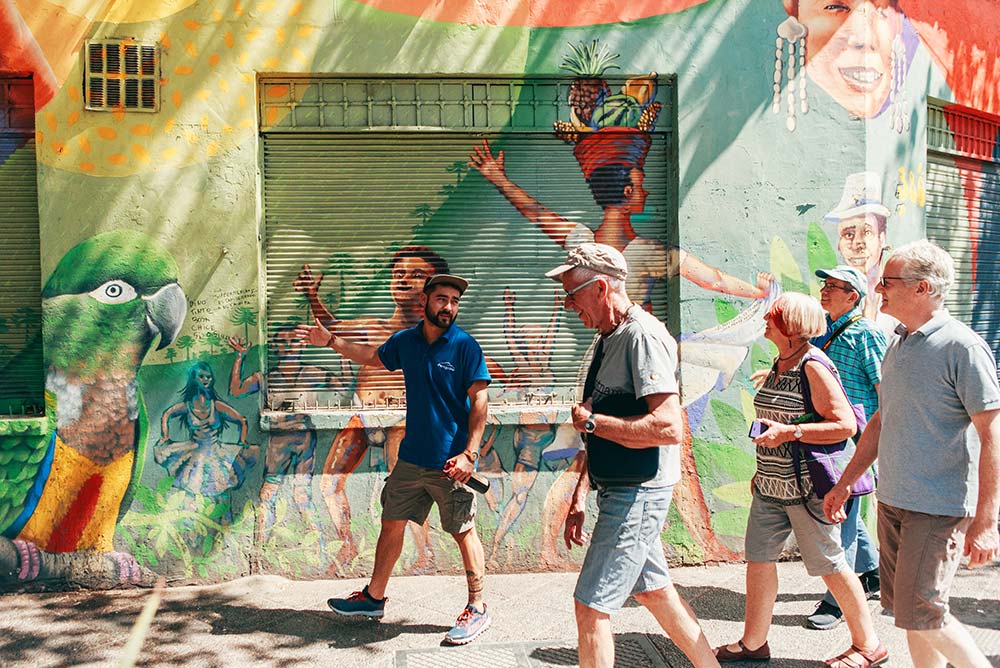 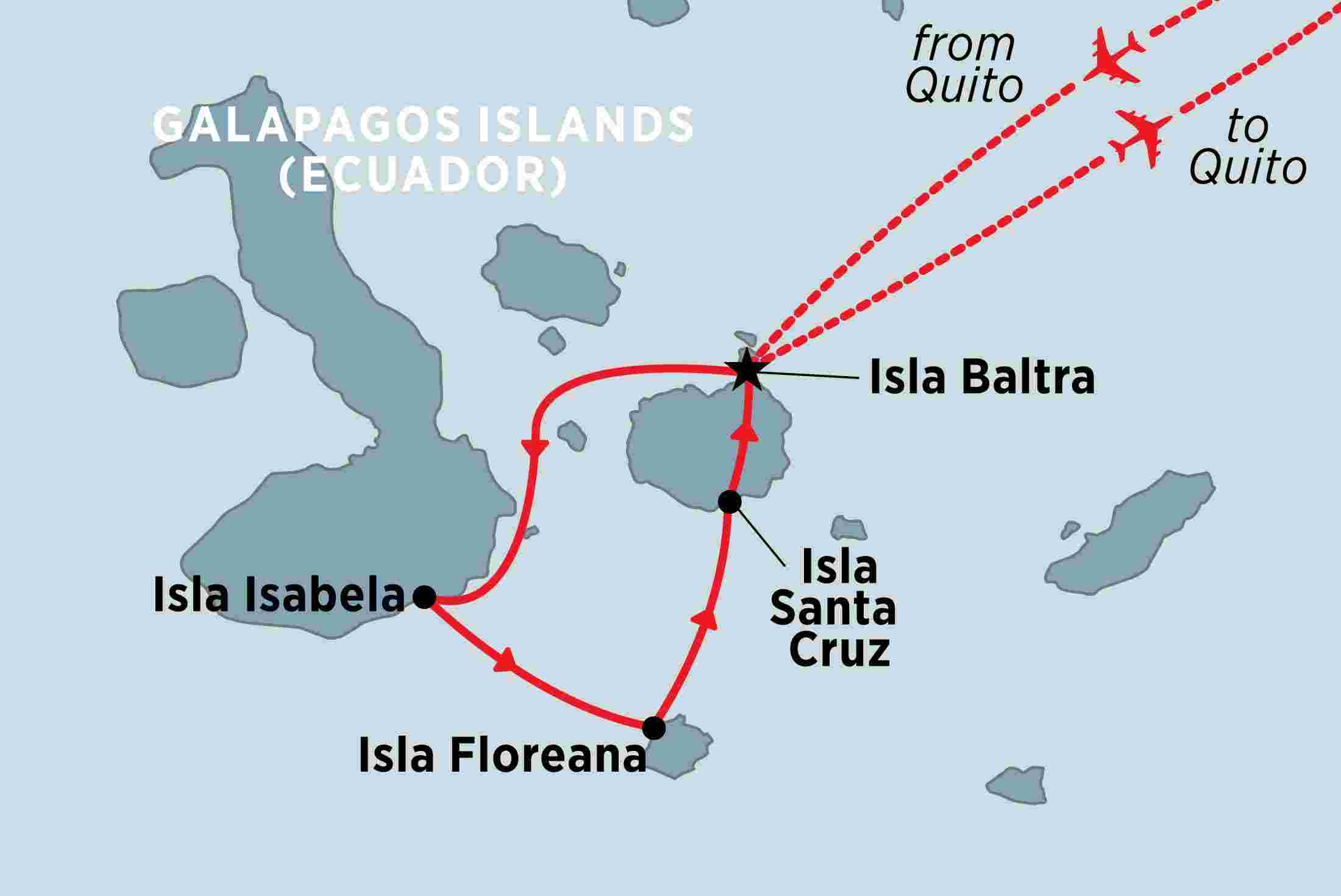 Enjoy a classic adventure in the Galapagos with Peregrine, taking in the wildlife... 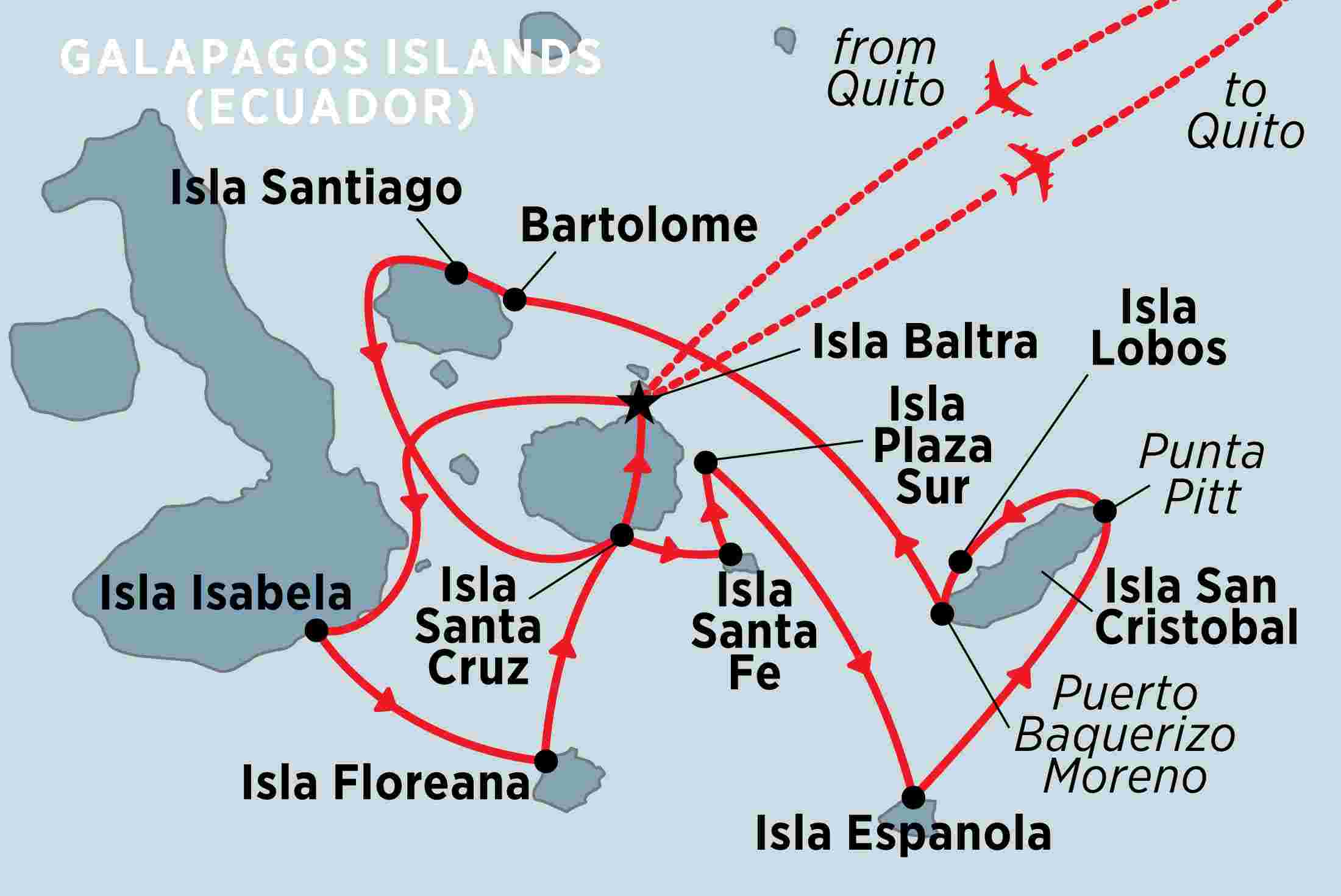 Embark on an immersive 13-day journey through the Galapagos Islands and experience the... 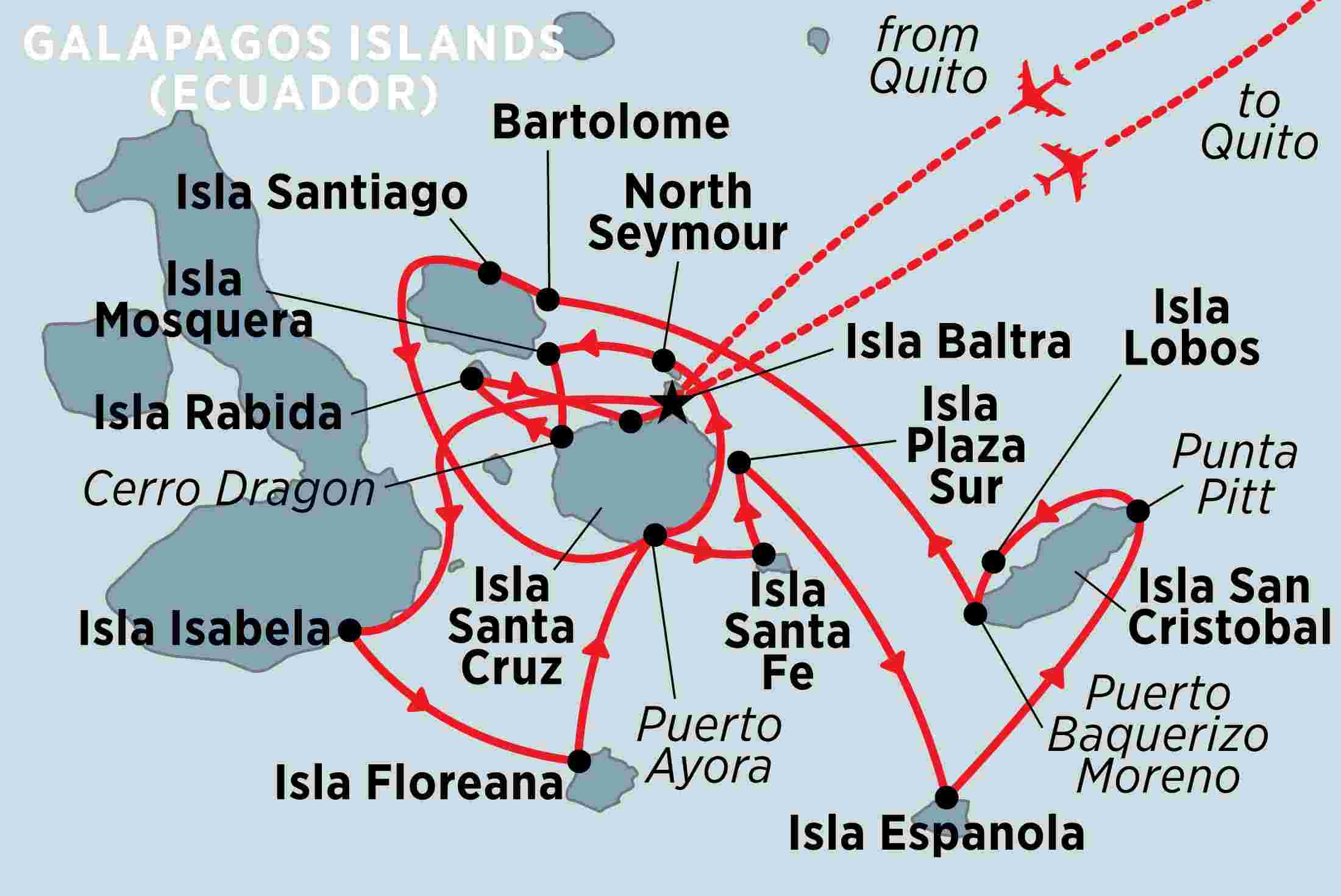 Enjoy the ultimate in Galapagos exploration with Peregrine, taking in all of the... 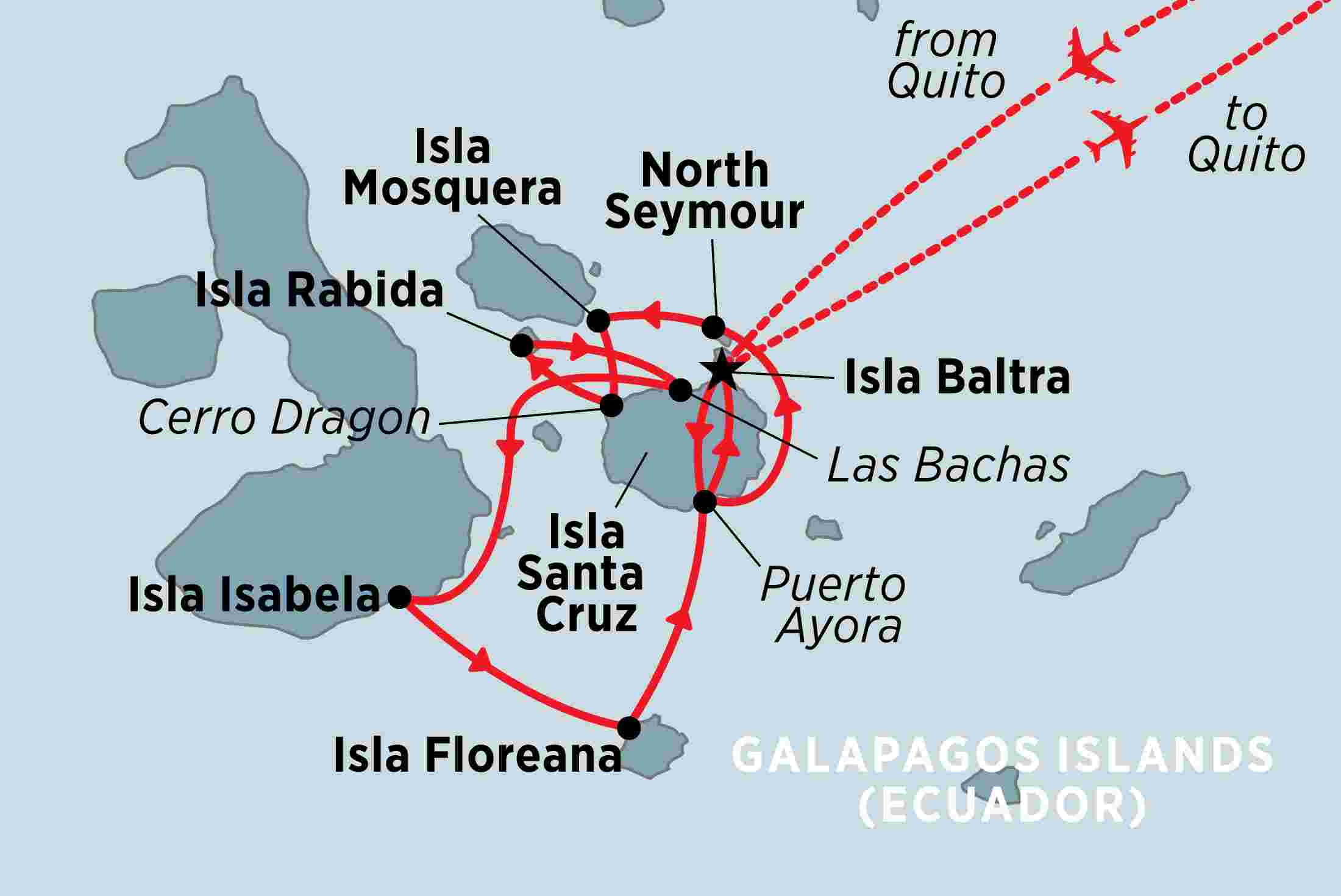 All aboard for a wildlife-rich adventure through the Galapagos Islands with Peregrine,...

See the best of the Galapagos Islands on this action-packed adventure cruise, touring...

Be swept up in the passion and verve of the South American interior, travelling... 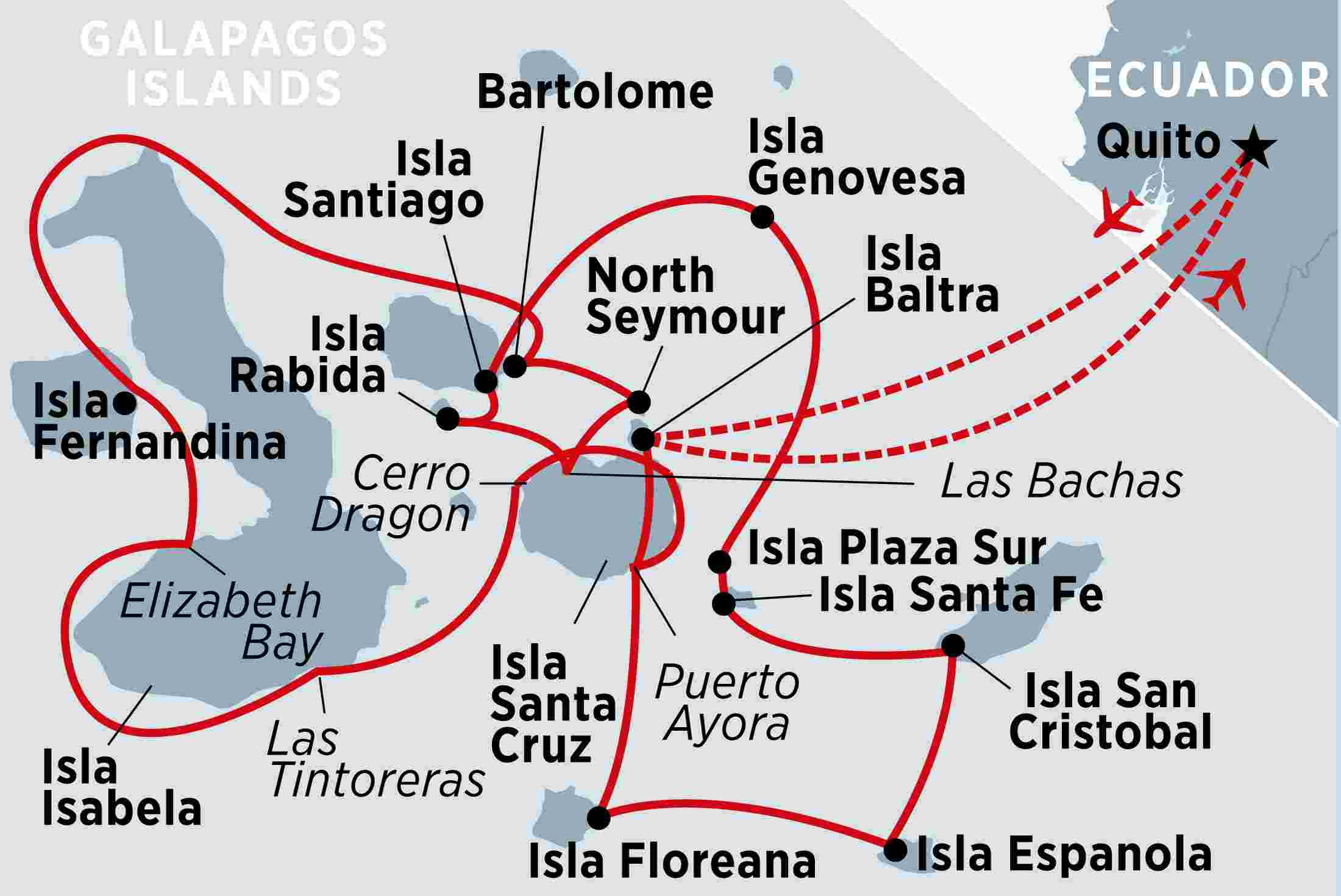 Discover the bizarre and the beautiful on this 17-day cruising tour of the Galapagos... 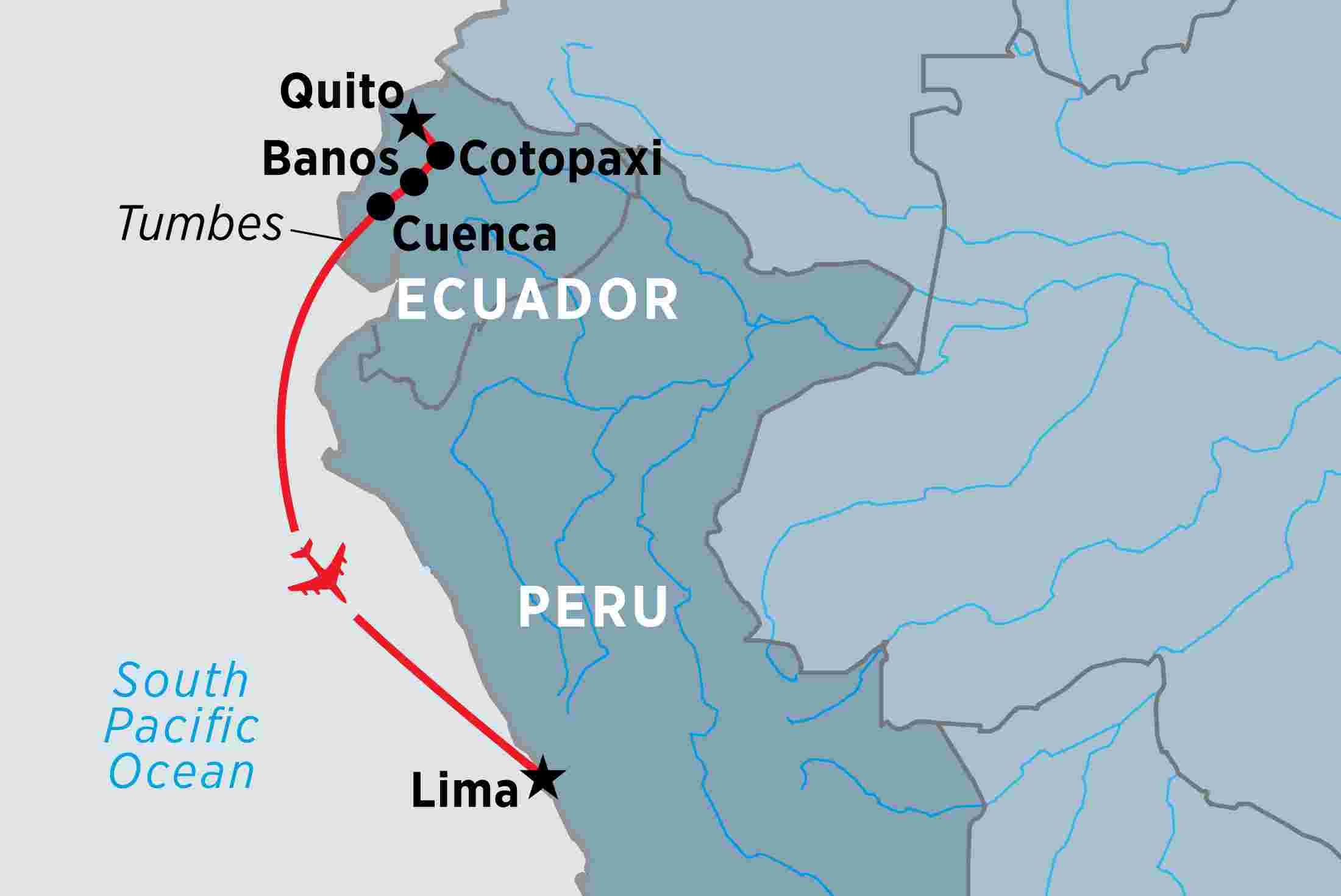 Nestled high up in the Andes, Ecuador may be small but it’s brimming with sights.... 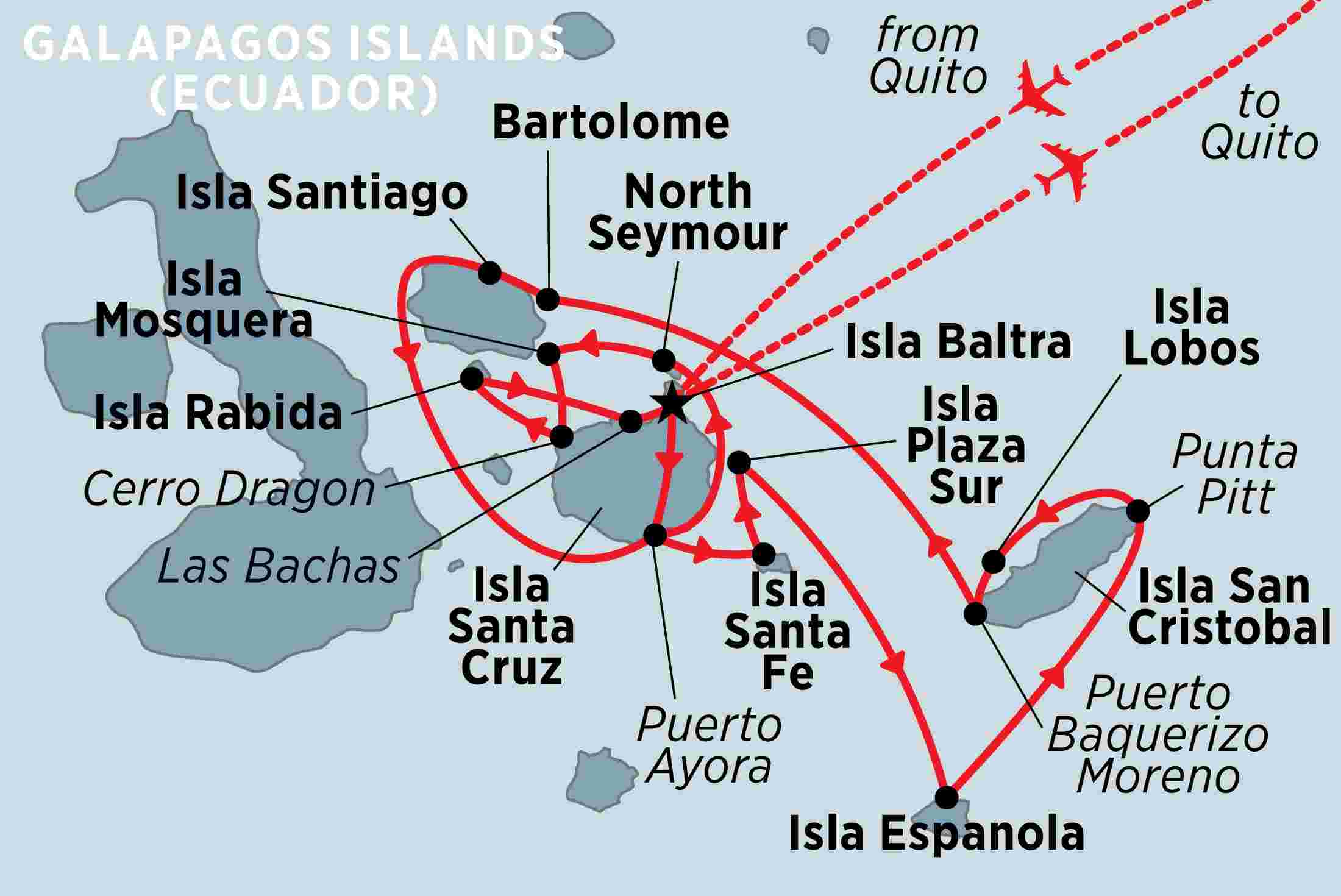 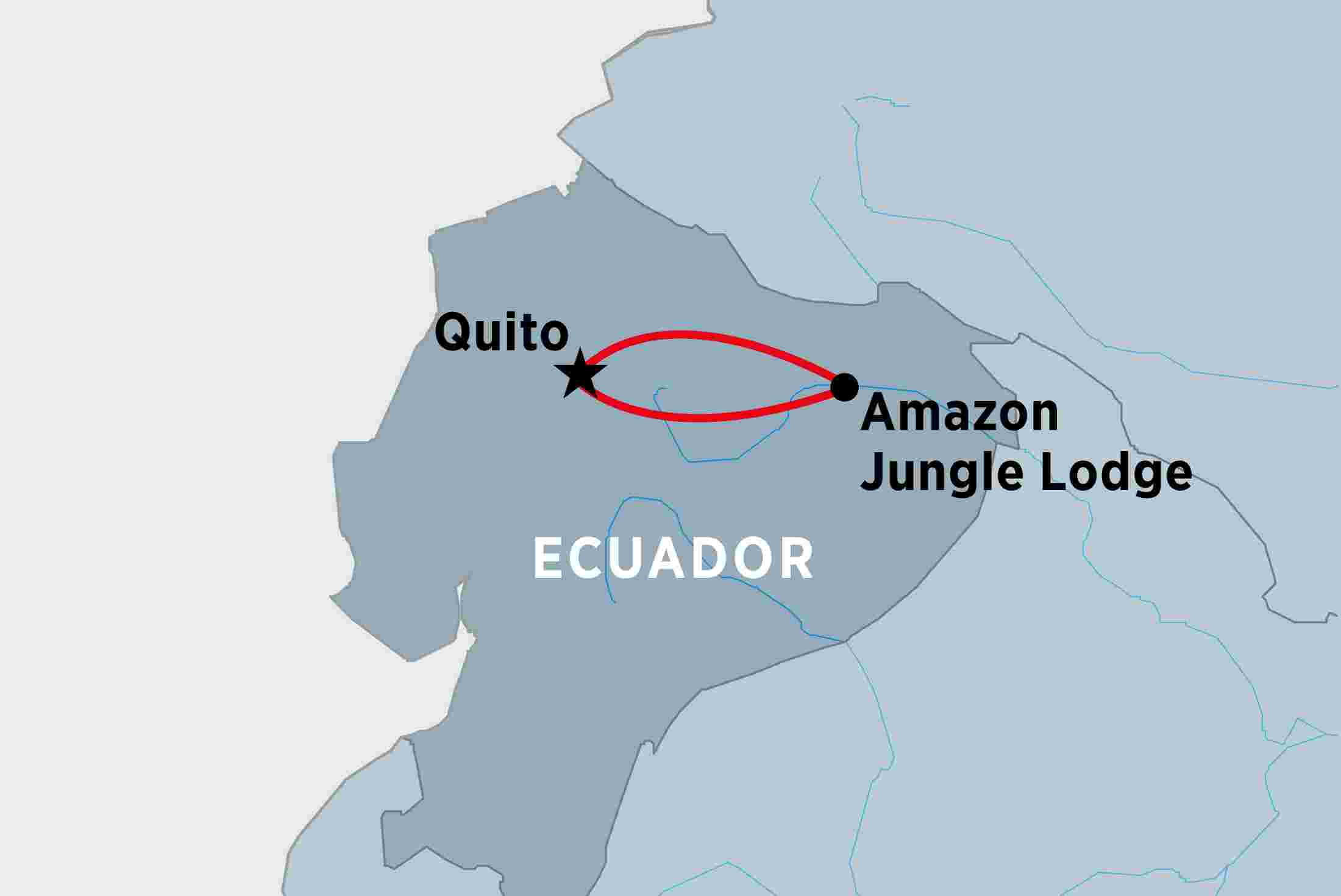 Starting and finishing in beautiful Quito, experience the Amazon Jungle at its best on...

Wake up surrounded by orchids and hummingbirds in the cloud forests of the high Andes.... 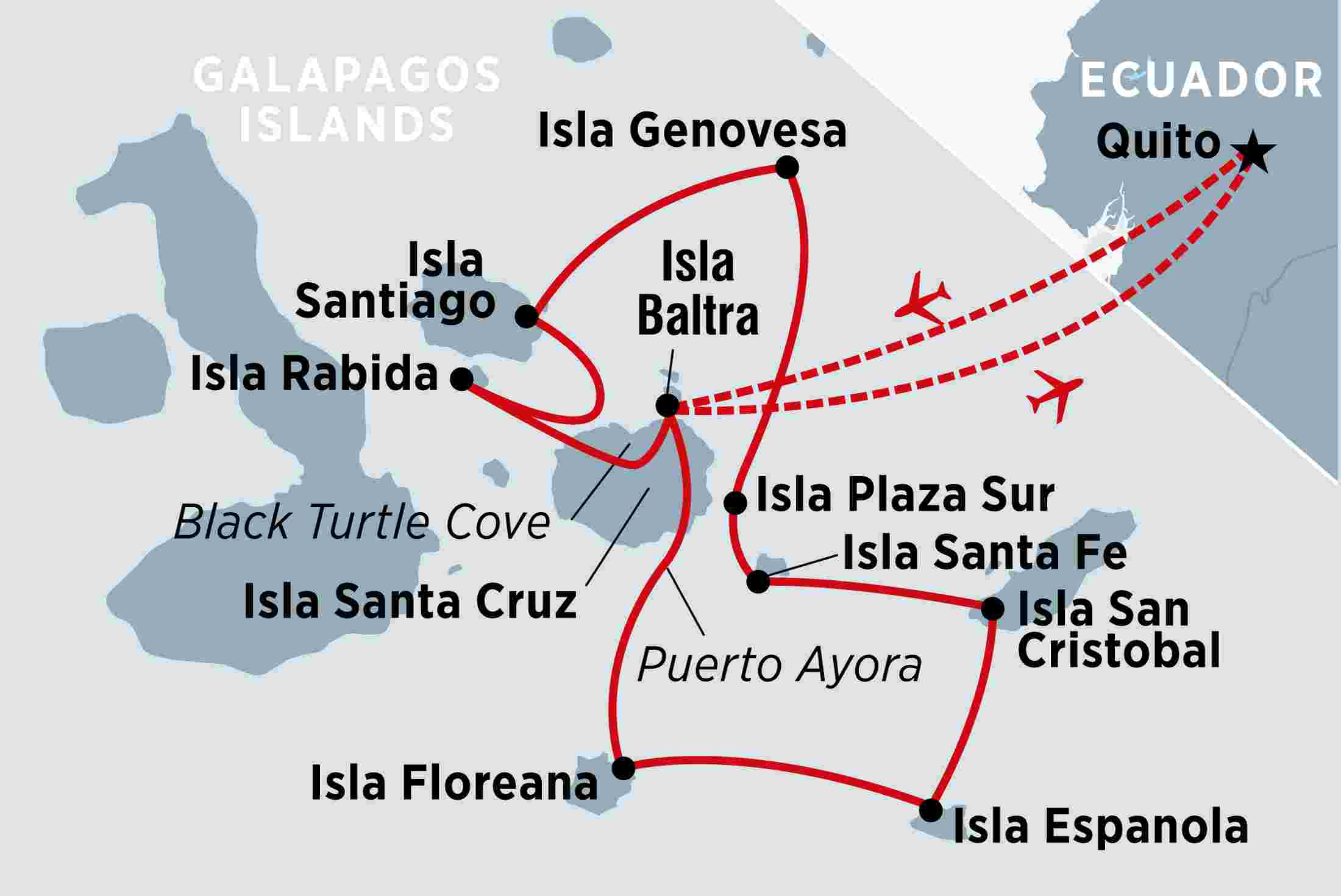 Take an active 10-day adventure cruise though the Galapagos Islands, from Isla Santa... 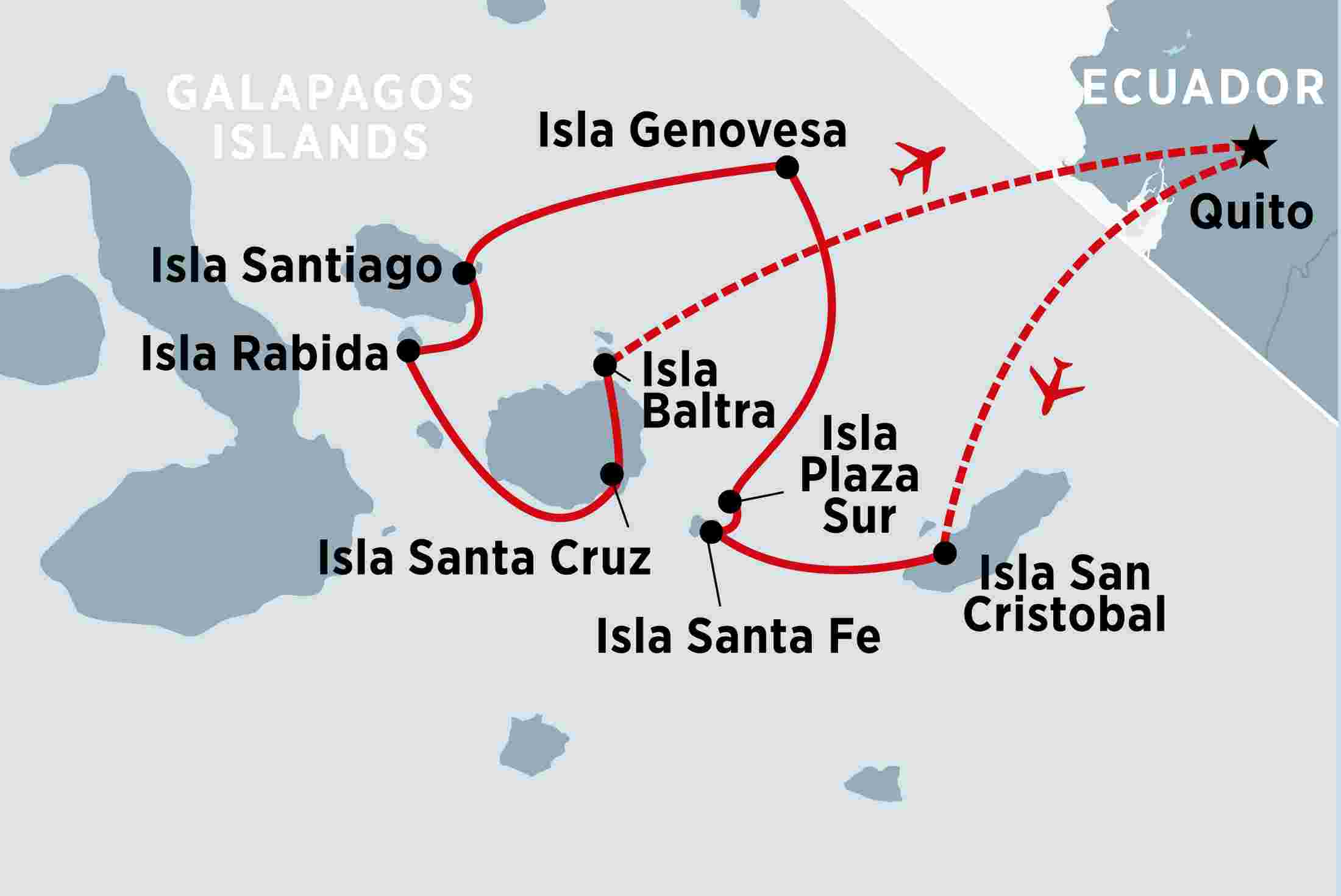 Discover the treasures of the northern Galapagos Islands on this cruise, including Isla... 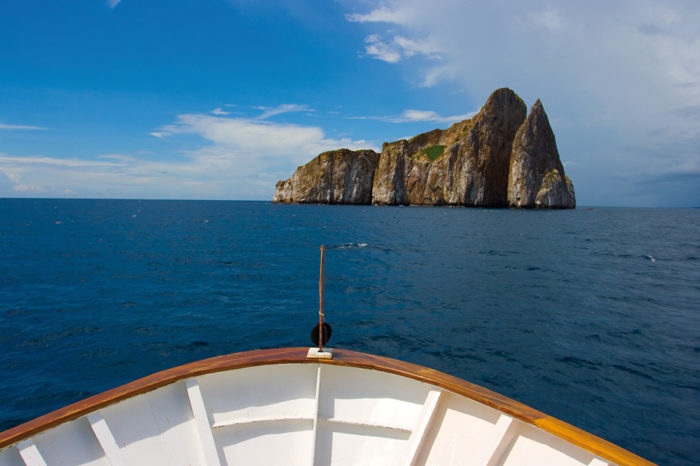 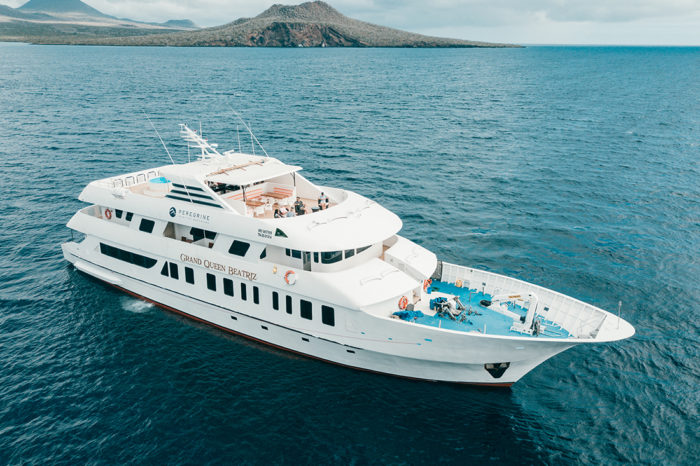 Galapagos Islands: a day in the life aboard the... 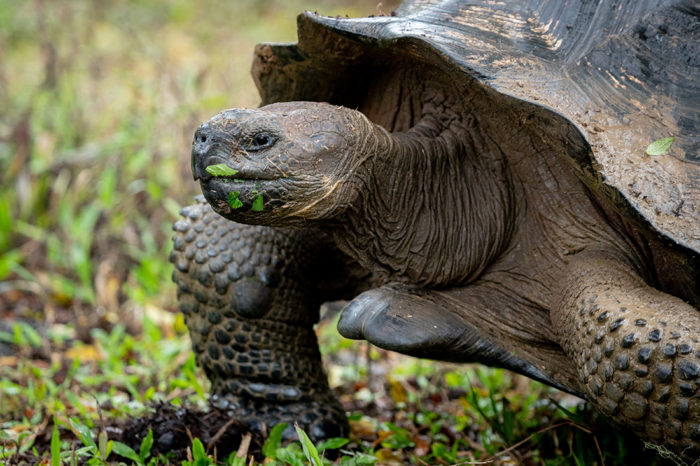 Wilder than ever: returning to the Galapagos... 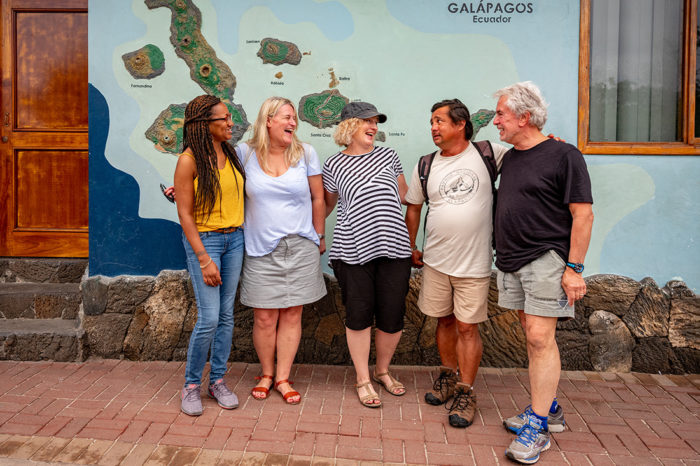 The perks of having an onboard naturalist in...

The best time to visit the Galapagos Islands 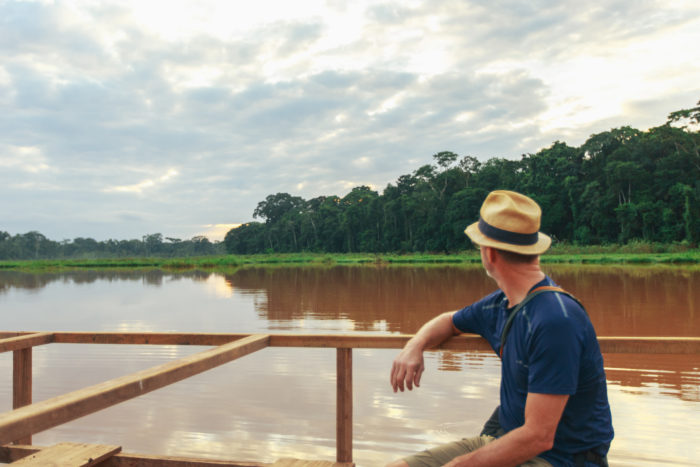 The magic of Ecuador’s Amazon and reconnecting... 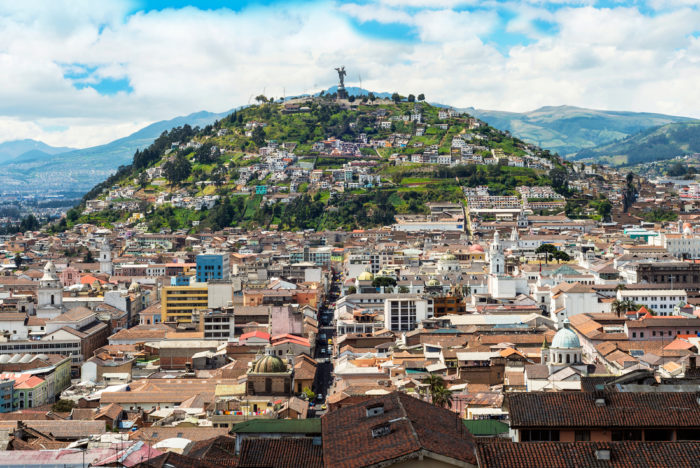 Quito and beyond: 7 destinations to visit in... 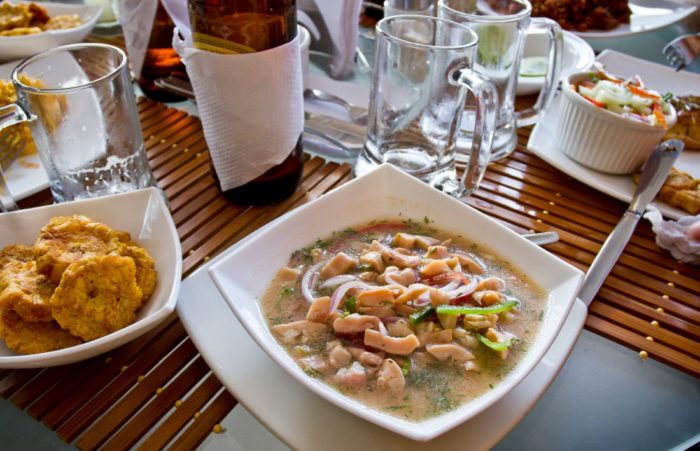 Eating your way through the Galapagos Islands 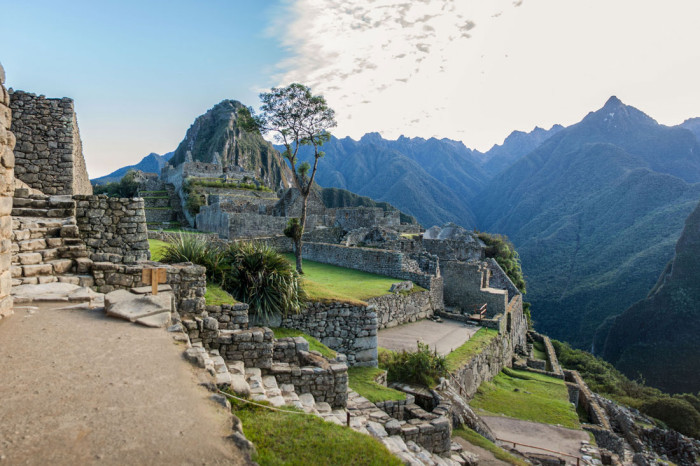 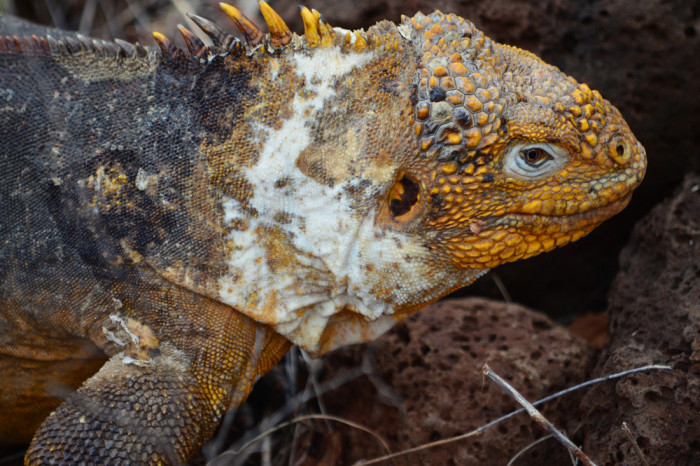 Your ultimate guide to the Galapagos Islands

Ecuador has a predominately Mestizo population of mixed indigenous and Spanish descent. Since the Spanish settled in the area in the 1500s, most of the population has been Roman Catholic, and this is clearly visible in the country’s slew of old and new churches. Despite the dominance of Spanish and Catholic traditions, many Incan languages are still spoken, and the indigenous community still celebrate their traditional customs. The minority African population also form an important part of Ecuador’s national identity, and they are widely known for their marimba music.

The coastal country of Ecuador enjoys a pleasant year-long climate and shares borders with Colombia and Peru. Ecuador’s terrain spans four main geographical areas, including the Amazon rainforest, The Andes mountain range with surrounding highlands, the coast and the Galapagos Islands. This latter part of the country is a famous grouping of volcanoes where Charles Darwin once studied animal life. Ecuador is one of the world’s megadiverse countries, and it includes animals such as the huge Galapagos tortoise, tropical fish and exotic sun-loving butterflies.

Complete your Ecuador tour with a trip to the local markets. You can find authentic handicrafts that reflect the cultures of the region, beautiful souvenirs and items for the home. Visit places like Otavalo Market and La Mariscal Artisan Market where you’ll find hand-knitted alpaca sweaters, decorative rugs and wall hangings, as well as wooden artifacts, paintings and handmade jewellery. Some of the finest quality leather products come from Ecuador, especially the city of Cotacachi.

Not just another wild South American party, New Years in Ecuador has its own mysterious local traditions. The cities and towns are strewn with effigies of public figures which are burnt in a symbolic cleansing of the previous year’s negative energy.

Festival of the Sun

Inti Raymi is an ancient festival that has survived the ages. Th eIncan population gather in the town of Otavalo, dress in their native costumes and celebrate their ancestry.

Ecuador’s carnival is a bit like the festivities of its neighbouring Latin states, but infused with indigenous traditions of the natives. The colourful parade of floats, dancers and costumes is complemented with an older tradition of throwing water, flour and flowers.

Ecuadorian cuisine is comprised of rich hearty stews, sides of starchy root vegetables and exotic meats. Hungry diners order meals like the seco de chivo which is stewed goat meat with a side of rice, and Ecuadorian ceviche made with lemony shrimp and tomato sauce. In the mountainous region, the locals eat cuy, or guinea pig, which is traditionally roasted. Out on city streets, tasty snacks such as crispy corn pancakes are sold by stall vendors. Have your meal the Ecuadorian way – with a generous slathering of Aji chilli sauce.

What nationalities need a visa for Ecuador?

Is tipping in Ecuador customary?

Tipping isn’t commonly practiced in Ecuador, unless the service is exceptionally good. At high-end restaurants, there’s a 10% surcharge on the bill, and there’s no need to add extra. There’s no need to tip taxis but you may like to tip hotel porters.

Internet is readily available in bit cities and urban centres but it is less available in rural and remote areas.

Will my cell phone/mobile work in Ecuador?

There is good mobile coverage in major cities, but services are unreliable in rural and remote areas. Remember to activate global roaming with your provider if you wish to use your mobile while traveling.

Ecuador has both Western-style toilets and squat toilets. You may like to carry some soap and toilet paper with because it may not be provided.

How much do things cost in Ecuador?

Is water in Ecuador drinkable?

Drinking tap water is not considered safe in Ecuador. For environmental reasons, avoid buying bottled water and bring a bottle or canteen with you. Ask your leader where you can access filters to refill your supply, or carry your own purification tablets with you.

Can I use my credit card in Ecuador?

Are there ATMs in Ecuador?

ATMs are common in major cities but can be rare in rural and remote places. When travelling out to these areas prepare by carrying cash with you.

Do I need travel insurance in Ecuador?

What public holidays are recognised in Ecuador?

For a current list of public holidays go to: http://www.worldtravelguide.net/ecuador/public-holidays